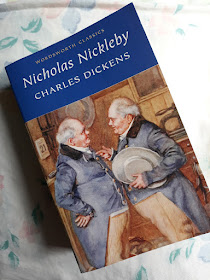 Two weeks ago is supposed to be the last weekly part of our Nicholas Nickleby Readalong 2021. However, for some reasons (strained right arm was one of these), I have failed to write any post at all until this weekend. Thus, this post will serve as my final review of the book, as well as a wrap up of our #NicholasNickleby2021 Readalong.

Nicholas Nickleby is by far the most comical novel by Dickens I have ever read. The Pickwick Papers is another comic piece that guarantees to make you laugh, but I categorized it more as a series of picturesque journal of a club which were compiled to make a novel - it lacks a significant plot to make it a whole one. Nicholas Nickleby, on the other hand, is a wholesome novel with satisfying plot, memorable characters (even the minor characters are interesting and colorful), and, even though presenting a grim subject such as the cruelty of faulty schools in Yorkshire, it is highly entertaining with all the extremely hilarious scenes!

The last sixteen chapters tells Nicholas' strategy to save Madeline Bray from her doomed marriage with Arthur Gride - a scheme by Ralph Nickleby to gain money, which Madeline's father owed him, as well as to snatch Nicholas' lover, and thus avenging him. It is nice to read how the rescue operation involves all the good people - Nicholas' friends. It seems to represent the battle of the bad v the good, of which, the good always wins. As usual, Dickens rounded up the ending of each characters "beautifully" for the good ones, and most especially for the wicked ones - though I think Sir Mulberry Hawk needs more sufferings before his death: some excruciating painful illness perhaps?... 😎 And then... there's the epic breaking up of the Dotheboys Hall - thanks to John Browdie! Apart from the wretched condition the boys must have been in after the breaking up, that was perhaps one of the most satisfying fictional "closures" ever! 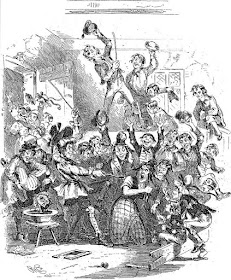 Love is in the air, indeed, as three of the female characters finally meet their future husbands. Yes, I love how Dickens found a match for Miss La Creevy - not that she won't be happy without, because when you have love and gratitude, you'll have peace and happiness. I just hope that she'll keep her miniature painting business just to keep her busy while Tim Linkinwater is working at the counting house. That will give her the utmost happiness and satisfaction, which she fully deserves.

I've been discussing several topics covered by Dickens in the weekly update posts. The main topic is corrupted educational system in Yorkshire for unwanted children, which Dickens had write it so convincingly, that public investigations were held upon the real schools, and many of them were closed for good. Bravo Dickens! I'm more interested, however, in one minor topic which Dickens, unintentionally perhaps, has hinted in this book, that is: social treatment towards women in 19th century (and how the women perceived it).

Interestingly, five women are subjected to special interests from men throughout the book, though with different intensity: Kate Nickleby (from Sir Mulberry Hawk), Henrietta Lilyvick - neé Petowker (from old Mr. Snevellici), Mrs. Nickleby (from the gentleman with the small clothes 🤭), Miss La Creevy (from Tim Linkinwater), and in a way - Madeline Bray (talked of by a registry office clerk). When Kate Nickleby became the topic of free gossips by Sir MH in a drinking house, Nicholas Nickleby thought it abominable (and attacked the assailant). The same happened when Frank Cheeryble heard the clerk was talking (admiringly but perhaps jokingly?) of Madeline Bray in public. These gentlemen were indignant that the ladies are talked of publicly without respect. The clerk protested that he only praised Madeline's beauty, which was strongly supported by the bar maid. Two different classes view the case differently.

Then there is the indignant Mr. Lillyvick, who was angry with Mr. Snevellicci's openly flirt with his (Mr. Lillyvick) wife, while Mrs. Lillyvick accepted it as normal, and was even angry with her husband for being insensible, for it's only a joke (the same woman who later eloped with a man - poor Mr. Lillyvick!) Mr. Lillyvick, though comes from working class, is quite gentlmemanly-minded. The same subtlety is showed by the clerk Tim Linkinwater when wooing Miss La Creevy; he never forced himself on her, only using his affectionate tone (poetic and funny!) WHEN he's assured that the lady reciprocated his feeling. The very different manner is showed by the gentleman with the small clothes, who, ignoring Mrs. Nickleby's polite implore to leave her alone, kept forcing himself on her, though romantically hilarious. Mad as he was, I don't believe he'd be any better when he's sane. These instances only proof that honor doesn't always come with wealth nor class - it's something you can never earn by yourself.

Over all, Nicholas Nickleby is a very entertaining novel with satisfying plot, hilarious scenes, and most memorable characters. It instantly becomes one of my favorites.

I thank all of you who has participated in this Readalong, for your accompany, posts, and comments. It has been a memorable and also inspiring reading event. For you who didn't or haven't finished, don't be disappointed - it's just not your time yet, but I'm sure you'd pick it up again some other time, as it's really a fun reading. I wish I could wish we meet again in next readalong, but for now, I'm not sure at all there will be another. Let's just see!