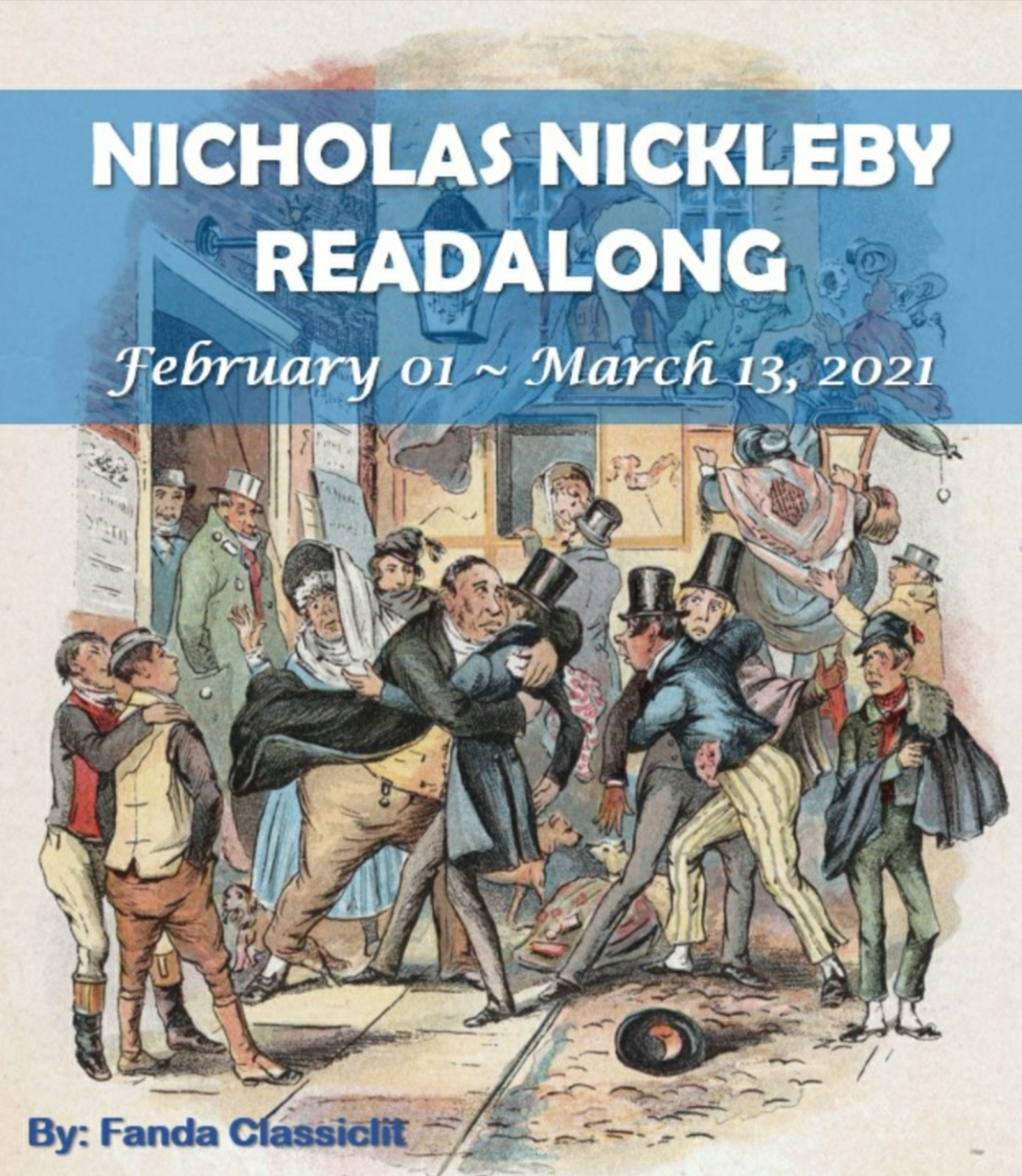 This is the fourth weekly update of Nicholas Nickleby Readalong 2021, and the story gets more and more spiceful, doesn't it? How do you progress so far? What chapter are you in?

There's a lot going on for me this weekend which, in the end triggered my depression. So this time I will only breakdown here some of the most important scenes/events from Chapter XXXII to XLI just to refresh our memories.

- Nicholas accidentally hears Sir Mulberry Hawk talking rudely about Kate. He confronted him, and it ended in a carriage crash, badly injuring Sir MH.
- Nicholas renounces his uncle's financial support for the family for good (yes, Nick!)
- Nicholas impresses a cheerful, kind gentleman, while looking for job. And here we are acquainted with yet some new characters: the Cheeryble Brothers (who owned a counting house and offered Nicholas a job) and Tim Linkinwater (the clerk). They also provide a cottage for the family. The Nicklebys' honor are finally restored!
- The Kenwigses' reaction on the marriage of Mr. Lillyvicks is pretty hilarious!
- Then there is the eccentric neighbor of the Nicklebys, an old gentleman who likes to throw vegetables over the wall to express his love to Mrs. Nickleby, which reminded me of Agatha Christie's Hercule Poirot who throws a marrow over his garden wall in The Murder of Roger Ackroyd. Both scenes are hilarious, by the way, especially when it turns out that the gentleman is actually mad! LOL!!
- Miss La Creevy notices that Smike becomes dejected lately.
- Ralph Nickleby enlists Sir MH and Mr. Squeers' assistant in a scheme of punishing Nicholas. Surprisingly, Lord Frederick Verisopht hates the way Sir MH has treated Kate. Good for you, my lord!
- Smike is caught by Mr. Squeers, but fortunately John Browdie is visiting, so he helps Smike to run away.
- Nicholas recognizes the pretty girl he encountered earlier at the agency office, who is visiting Mr. Cheeryble. Everyone keeps her identity secretly, that Nicholas employs Newman Noggs' help to investigate her name and address. He did, but it's the wrong lady!

Nicholas Nickleby is widely regarded as one of the greatest comic masterpieces of 19th century lit. Do you agree? What is your favorite/most hilarious/most memorable comic scene so far? 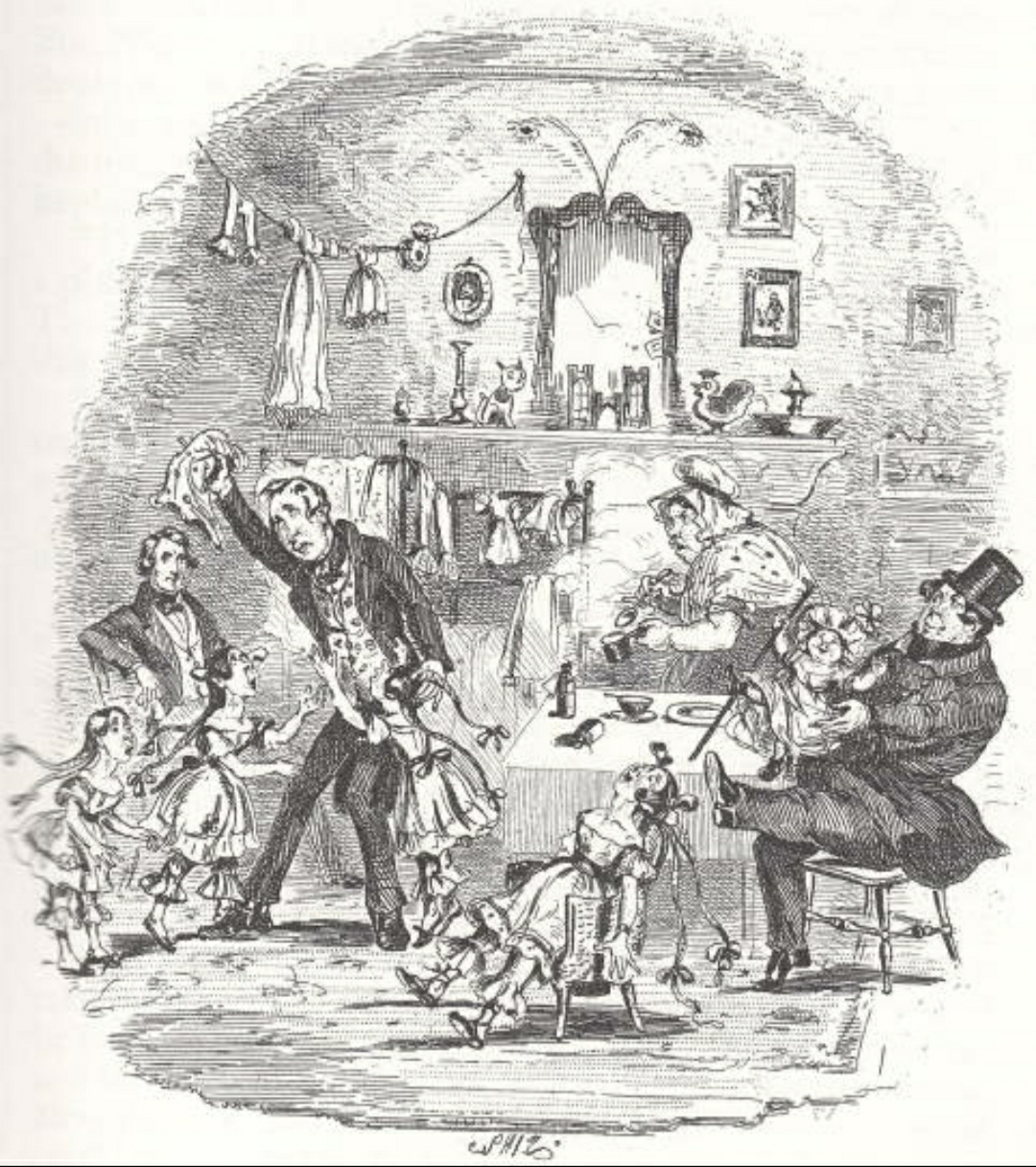 For me, the most hilarious one is the "old gentleman in the small clothes" scene in the last chapter. Then there is also the scene of Mr. Kenwigs when he heard from Nicholas that Mr. Lillyvick is married:

Mr. Kenwigs started from his seat with a petrified stare, caught his second daughter by her flaxen tail, and covered his face with his pocket-handkerchief. Morleena fell, all stiff and rigid, into the baby's chair, as she had seen her mother fall when she fainted away, and the two remaining little Kenwigses shrieked in affright.
"My children, my defrauded, swindled infants!" cried Mr. Kenwigs, pulling so hard, in his vehemence, at the flaxen tail of his second daughter, that he lifted her up on tiptoe, and kept her, for some seconds, in that attitude. 'Villain, ass, traitor!'

Newman Noggs is very funny too. I love several of his scenes everytime he gets excited!

Hopefully the next chapters are as funny as these. I, for one, am looking forward to read more about the old gentleman in the small clothes. What does it mean by small clothes, anyway?...

Posted by Fanda Classiclit at 1:06 PM