The Murder of Roger Ackroyd by Agatha Christie 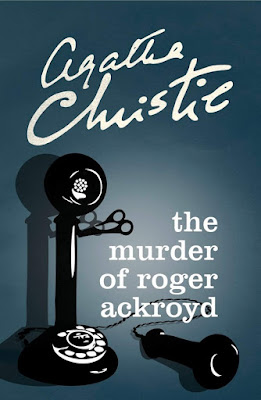 This was my third read of Agatha Christie #7: The Murder of Roger Ackroyd, which I think deserves to be labeled her masterpiece, and I tell you, I loved it even more than my precious two reads! But before I tell you more, I must warn you that this post contains HIGH LEVEL SPOILER! Do not continue reading if you haven't read it before – the spoiler might even start in the next paragraph! – as even tiny spoiler would ruin your reading forever; it will never be the same, trust me! So I have warned you!

I have not placed The Murder of Roger Ackroyd on top of my Agatha Christie favorites for no reason. To me, it's not a mere detective 'whodunit' story. There's something much deeper than that - a thorough analysis of human nature, and a great case of psychology.

As I have been familiar with the plot and all surprises on the first and second reads, this time I dedicated my reading solely focusing on Dr. Sheppard's feeling and mental conditions - or you can call it the murderer-psychological-mapping. I have been wondering how an ordinary person could turn into a murderer. What the process looks like, at which point he decides to commit the murder, and what triggers him. And more importantly perhaps, what quality he possesses (or lacks of) which prompts him to it.

But I would like to say first, that this third reading made me realize that Christie has in fact sprinkled bits of clues all throughout the story from the very beginning - yes, even from the opening of chapter one. But, and here's where her genius lays, how are we supposed to have suspicion right in the beginning, through the words of the narrator? And, as it was only the beginning, we would just swallow everything as we still don't know for sure what's going on. Clever! Then, it gets even clearer when Doctor Sheppard got his "first foreboding": the tete-à-tete of Ralph Paton and Mrs. Ferrars. But then, we might assume that he has his concerns for Ralph – again who would suspect that a narrator would be the antagonist?

More about Doctor Sheppard; Caroline (his sister) once scowled James of being weak – and I remember he wondered why she said that. That line has particularly struck me. There lays the answer to my question: James – as are Ralph and Flora (see Poirot's speech) – is morally weak. These three lack the courage to do the right thing when under pressure. They tend to choose the easiest way, despite of everything. In James' case, I think Caroline's strong character and sharp tongue 'helps' turning his weakness into worse. The only way out he could see is money. Money can buy him freedom to go as far away as possible from Caroline (Argentine is his choice). And when Mr. Ferrar died, he saw the possibility only too clearly. Now, we all have been presented with temptation, on certain degree in our lives. What has made us choose the right way, though the others looks much better? I believe it's character strength – the courage to strive in bad condition in order to obey our conscience. James' worst choice is when Ackroyd summoned him. He should have confessed to Ackroyd about the bribery. Ackroyd trusts James, and I think the worst possibility is Ackroyd would scold him, won't trust him anymore, but in any case won't tell the police. But James perhaps couldn't take it that, of all person, Caroline – and maybe Ackroyd too – would have seen him as a crooked all his life. So, Ackroyd must be muted. There's no other way.

As I have said, this book is a great study of human nature. Sometimes, unconsciously, we help a man turned into bad. Sometimes it's the society, but it is also possible that we invented these murderers from our own small community, or even, our family. Crime and murder can be gory and scary. But I believe the scariest thing is the fact that anyone of us can become a murderer. We need only to make the choice.

What a rereading this has been for me! And I think I will keep reading this book in future, no matter how familiar I am with the plot. Just to remind myself of always taking the right choice in difficult times, not the easiest!