Four Seasons in France and A Walk in Paris for #ParisInJuly

The second week of #ParisInJuly, and I was celebrating (quietly) le quatorze juillet with these activities: 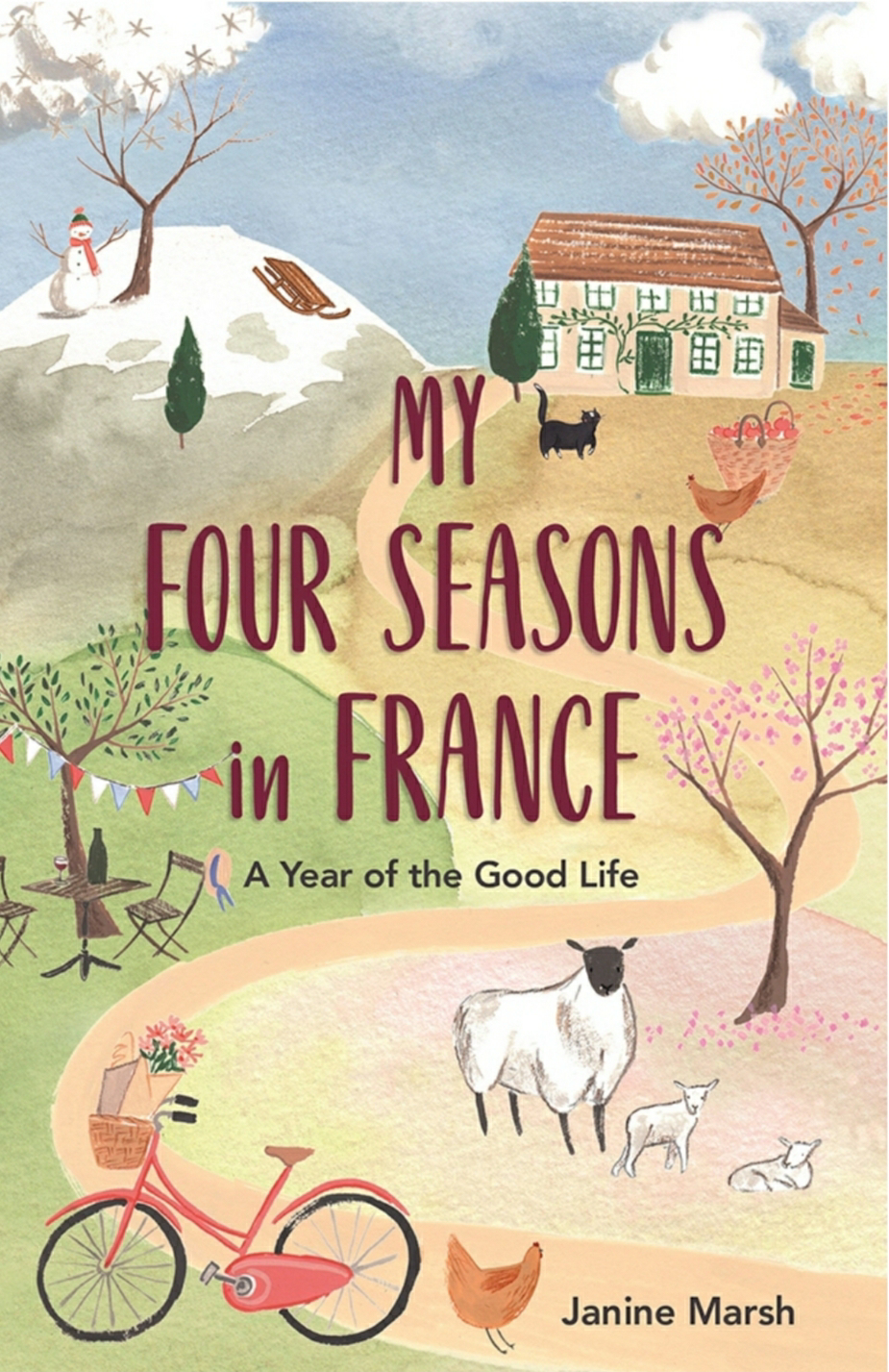 Following the first memoir from Janine Marsh, The Good Life in France, this book tells Janine and Mark's experiences through the year in their old farmhouse in Seven Valleys, a rural village in northern France, in the region of Nord-Pas-de-Calais.

Far from the busy career woman Janine had been before moving to France, she is now busy with her farm life, specially with 3 dogs, 6 cats, 16 ducks, 4 geese, and 17 chickens! A lot of hilarious adventures came with these animals, not mentioning how Janine and Mark named them after celebrities. There is Mariah Carey, the high-pitched-squeal duck, for instance.. Then there are also Brad Pitt and George Clooney, the ducks, and many, many more that always trickle me to chuckles. Each of those animals has its own unique personality, just like their neighbors. After two books, I came to love Jean-Claude, Claudette, and all other kindhearted, but sometimes eccentric, people of Seven Valleys.

Not all of the stories are cheerful, though. I was heartbroken over a tremendous hailstorm that hit their tiny village, causing damages and heartbreaks. For Janine and Mark, especially, whose years of hard works of repairing the dilapidated house has just about to finish. I admired these people's caring and lovely spirits, helping each other, and still find ways to have fun through village events, or picnics, or just an outing to nearby flea markets.

Oh yes, I loved this book better than the predecessor. It's funny, sweet, and warm. It made me considering a quieter but more meaningful life after retirement, or like Janine said: "...shrugged off the cloak of detachment as form of protection to preserve some personal space in a crowded environment (in big cities)." 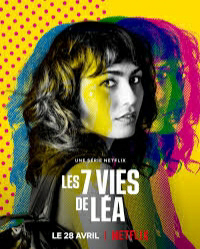 A fantasy drama about a girl (Léa), who found the remaining body of a young man who died years ago, a school friend of her mother and father. And for seven consecutive mornings after that, Léa awakes in seven different bodies of people in year 1990, while she tries to solve the intricate mystery surrounds the man's death. A thought-provoking thriller! 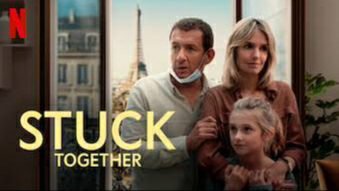 Paris. Covid-19. Lockdown. Residents of an apartment building. Stuck together. There.. you can conclude what this comedy is about. It is hilarious, but sweet and heartwarming at the same time.

🚶‍♀️A Walk in Paris - a YouTube channel which brings us to take a stroll around a certain area in Paris with him. No commentary, no music, just walking and absorbing the city's dynamic spirit. I picked a walk in Le Marais area (34 mins), and then another along the Seine (26 mins). Now I'm tired after an hour stroll 😛, so... à la semaine prochaine!

What about you? What've you been doing for #ParisInJuly so far?
Posted by Fanda Classiclit at 7:52 AM 2 comments:
Email ThisBlogThis!Share to TwitterShare to FacebookShare to Pinterest

I've been having a great time for the first week of July, "transporting" myself to France most of the time, thanks to #ParisInJuly! Here's what I've been doing so far:

📕 My Good Life in France: In Pursuit of the Rural Dream by Janine Marsh - ⭐⭐⭐⭐ 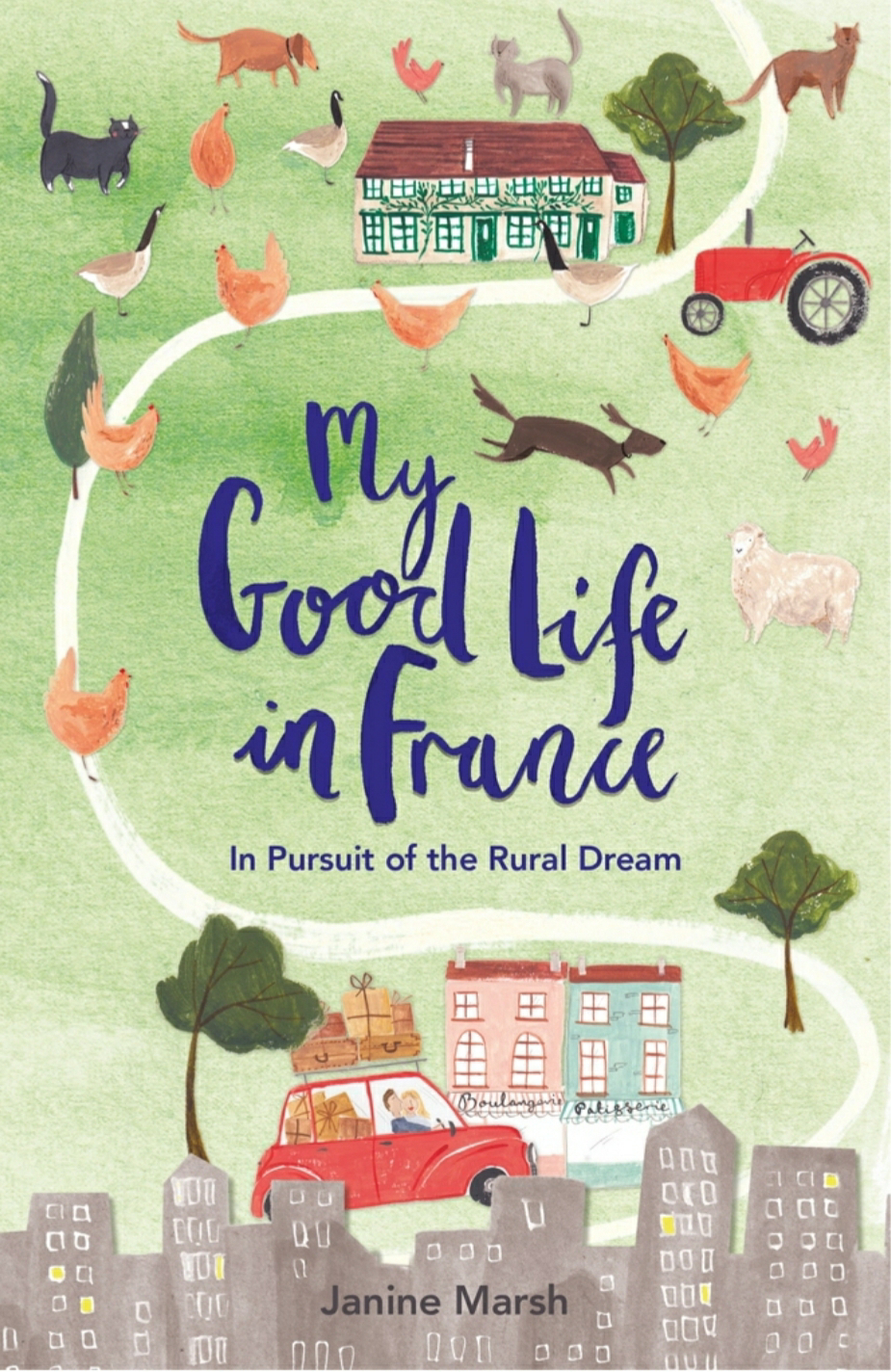 It's a memoir of a Londoner couple, Janine and Mark, who once visited France, had a coup de foudre with its rural village life, and decided to emigrate. Janine had a nice career in London, promising a secured high position. But that one trip she took, one afternoon, to buy wine for his grieved-father, unexpectedly brought her to sightsee some cheap farm houses in the rural Seven Valleys area in Pas de Calais, in northern France. One dilapidated house (used to be old barn), in particular, struck a cord in her heart. Several months later, Janine and Mark bought the house, left their comfortable metropolis life in London, to live a good life in rural France. Of course, starting new life in new country with different culture and lifestyle isn't easy; let alone in a quiet nowhere, with a rundown house.

This book is the first of a series of three (so far), focusing more on Janine and Mark's struggle to make their house habitable, learning social etiquette in France, and introduction to their neighbors. For a Francophile, this book is trully delightful, because it gives you insights about many towns or even small villages near Seven Valley, such as Montreuil-sur-Mer or Hucquelieres - what treasure one would find there, and sometimes even the name of the flea market or cafe worth a visit - which otherwise you would probably not know as tourists.

I also learned some fun facts about French people. For instance, how they like to kiss on the cheek, but not hug; that they are usually friendly even towards strangers - always greet you with "bon jour"; or that one of the most famous colors for kitchen is yellow - inspired by Monet's kitchen in Giverny! And I just found out about how easy it is to dump rubbish in France (there is the déchetterie: the municipal rubbish dunp). Here in Indonesia, you must pay someone (usually the workers) to dump the rubbish for you.

All in all, this is just a perfect book about something I love dearly: France. I love the way Janine wrote it, light, cheerful, humorous, not overdramatic, and you can feel the French vibes, as if you're there yourself. Now I can't wait to read the next book! 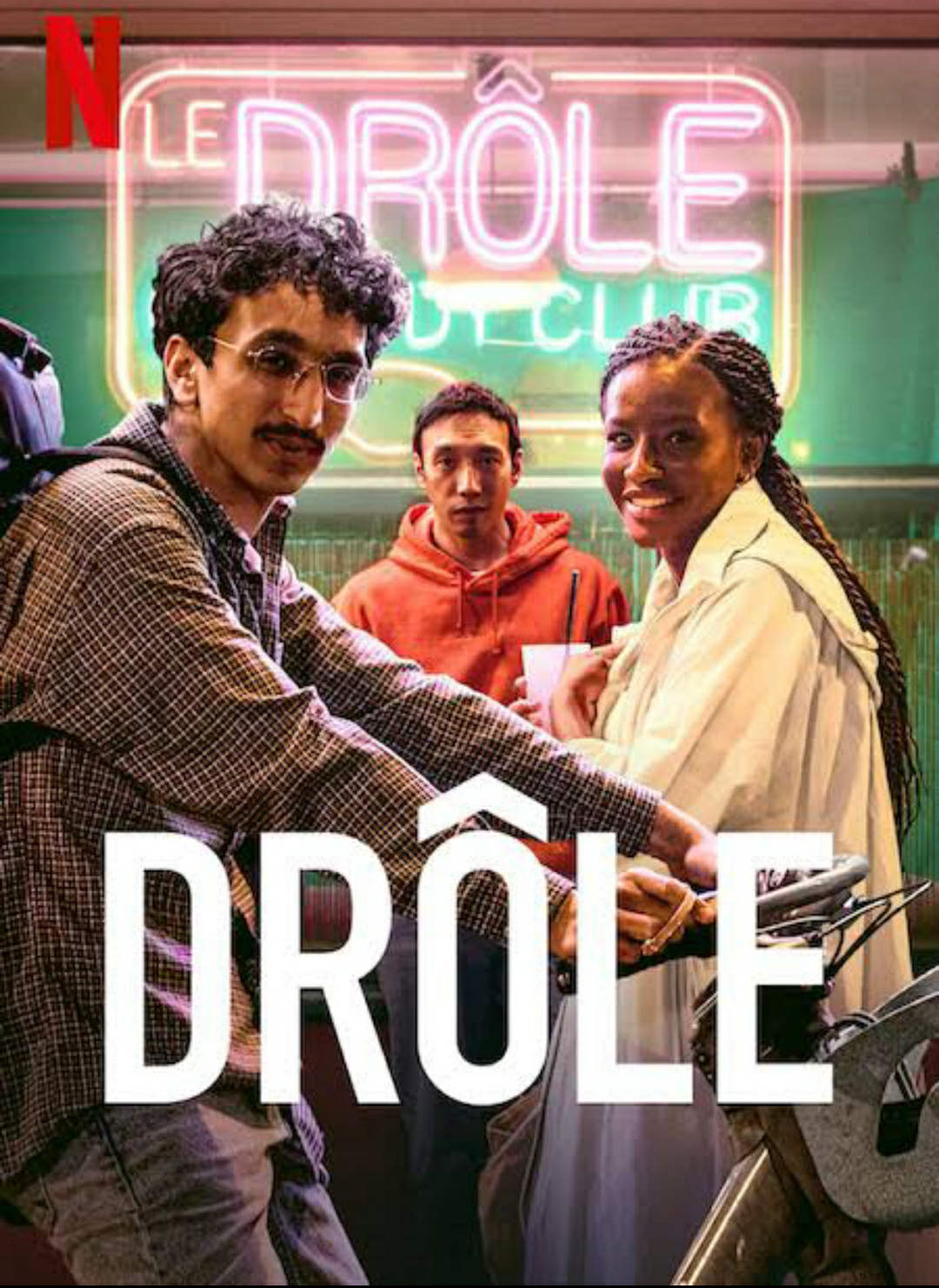 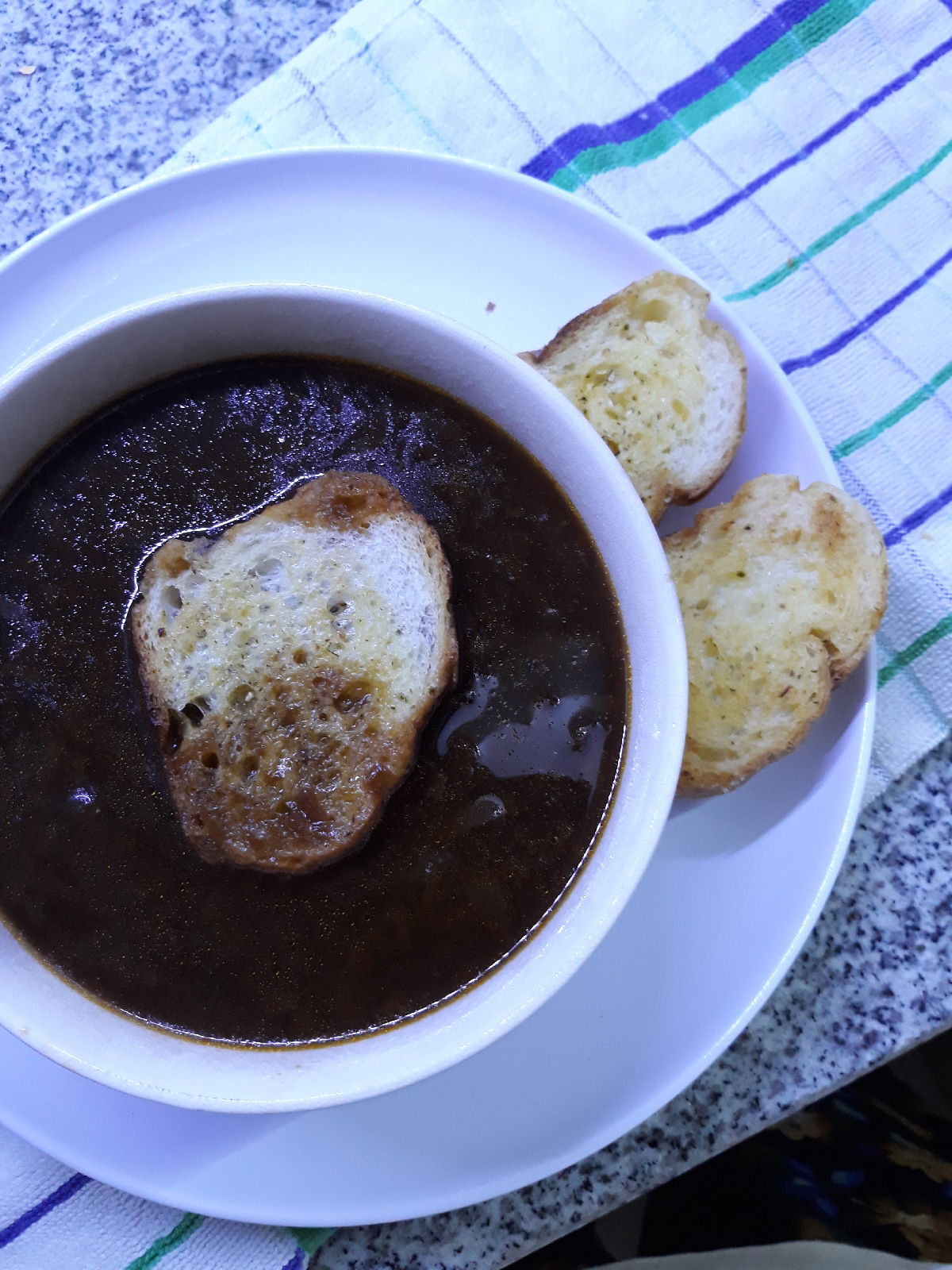 What about you? What've you been doing for #ParisInJuly so far?
Posted by Fanda Classiclit at 8:32 AM 7 comments:
Email ThisBlogThis!Share to TwitterShare to FacebookShare to Pinterest
Labels: #ParisInJuly

Waving June Goodbye, and What I'm Most Anticipating in July 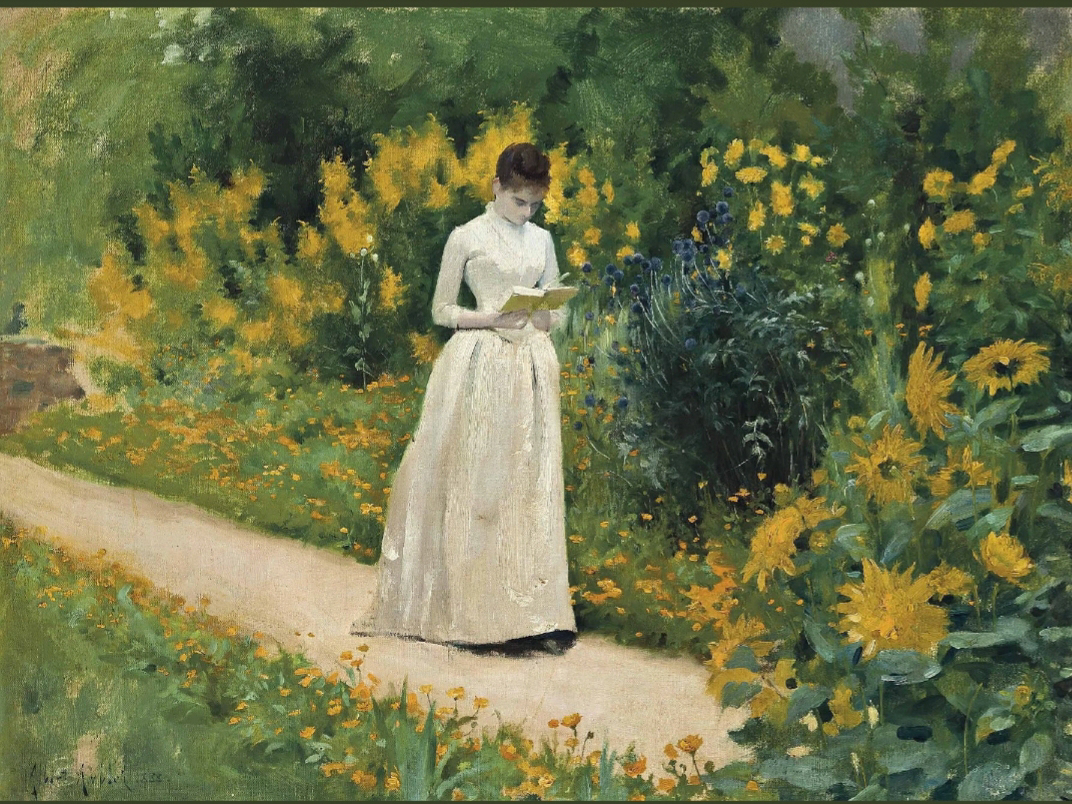 June and July are the coolest months here where I live, so those are always my two favorite months of the year. It usually reflects on my reading mood.. no, my whole mood, too. I've had less and less "meltdown" these days, though life is still not easy yet, but one's just have to live through, right? I've had a fun reading - finishing Evelina, and then started on Flappers and Philosophers, which proved to be my most favorite short story collection. I guess the Jazz Age vibes helped a little? And of course, the anticipation of #ParisInJuly lifted up my spirits. How about you? Did your June turned out to be successful too?

The Seagull by Anton Chekhov, on the other hand, was a flop. I've read The Cherry Orchard years ago, and loved it. It's not cheerful, of course, but at least had a good plot. I've expected The Seagull to be similarly melancholy-nice too, but I was disappointed. It's... weird. 'Till now I still couldn't grasp what it's all about. You'll see more in my review around next week.

One of the most anticipated bookish events: Paris in July! And not about reading too. I plan to read these 3 books (all non classics):
📕 My Good Life in France by Janine Marsh
📕 My Four Seasons in France by Janine Marsh
📕 The Girl, the Dog, and the Writer in Provence by Katrina Nannestad
Let's say I'm taking a break from reading classics, and having a vacation in Paris for the whole month.