The Three Theban Plays: The Oedipus Cycle by Sophocles 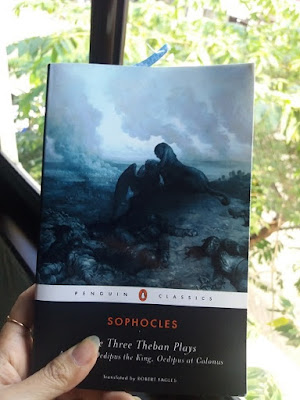 For me, Greek plays always have their own charms. Compared to Renaissance’s or any modern plays, I find Greek’s is more intense in emotion. It always feels like I was in a theatre watching the performance live. I have actually never done this, but still….

If I remember correctly, the first play I have ever read years ago is Oedipus the King—I read Indonesian translation then—and have been mesmerized by it. One aspect I love in Greek’s plays is the chorus. It reminds me that I’m reading a play, not a story written as a play.

Oedipus Cycle begins with Oedipus the King, the most famous one. Reading it at much mature age made me realize a wider theme it covers than just a tragedy of a son who married his mother and killed his father—though unintentionally. It speaks a lot about destiny. Can we, mortal, avoid it? Oedipus had tried hard by fleeing from his country; nevertheless it happened without his knowing. And the blow becomes harder because, firstly, he has listened to the prophecy (and worked hard to resist his destiny), and secondly, he then insisted on having all the truth. I imagined, if he have never known the prophecy, he would still have stayed with the Laius; never have come to Thebes to become their King with pride, and to marry Jocasta… and so on. But speaking about destiny, one often comes to think also about free will. “Is destiny a real thing? That makes us like some puppet; don’t have control over our life? If so, does free will also exist?” So… when we are still thinking hard (without coming to a satisfying conclusion), we might want to move on to the second play: Oedipus at Colonus. And there… only there do we get the answer!

Oedipus at Colonus is the opposite of Oedipus the King, in term of the theme. Oedipus—in his old age and banishment—is now a more humble person. He admitted how he was dependent on his daughters’ loving care and Theseus’ generosity; that without them, he was helpless. He didn’t grudge against his bad fate; he could accept it and be peaceful with himself. Only after that, his life became meaningful by giving others better lives. How beautiful the lessons Sophocles taught us from these two plays; that Antigone—the last play—was almost felt like anti-climax.

All in all, Oedipus cycle is a very emotional, intense, engaging, and entertaining plays. My favorite is perhaps Oedipus at Colonus—I was happy for Oedipus’ reconciliation, and was fallen in love with Theseus’ calmness, generosity, and noble character.

Posted by Fanda Classiclit at 7:30 AM 2 comments:
Email ThisBlogThis!Share to TwitterShare to FacebookShare to Pinterest
Labels: #CBAM2017, BC, Greek, Play, Sophokles, The Three Theban Plays, Tragedy

Kafka’s The Metamorphosis (and other writings) 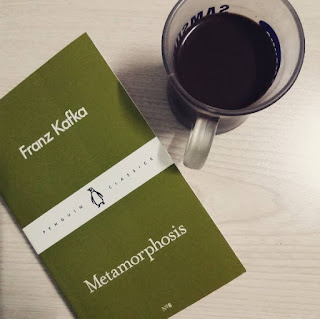 First of all, Penguin Classics should put a subtitle “and other writings” after Metamorphosis for this edition. I have a habit of ignoring list of contents or notes, because chapters/part titles often reveal the story plot. For me, curiosity is part of reading excitement, thus I don’t like anyone to reveal anything before I read it myself. When I need a reference or anything to help me understanding a passage, I will consult the introduction or list of contents myself.

So, without any subtitle, I assumed that when I opened the first page of the story, it had to be The Metamorphosis. “The Contemplation”—printed largely on first page—I assumed to be a part title (silly me! -_-). And so I read on, chapter after chapter, yet I could not find any thread. Every chapter seemed to be independent story, though it also felt incomplete. Until I finally reached the part of The Metamorphosis. Only then I knew there’s something wrong. I consulted the “note on the text” in the front pages, and found that “The stories in this collection were written…..” Oh OK! It’s a story/journal collection then, not a single novella!

The first collection was Contemplation, written in first person POV. All of them have one same tone: wary, dejected, and lonely. The Metamorphosis itself had the same tone. The protagonist (Gregor) feels alienated and burdened by his job. But what disturbed me most is the reaction of his father, mother, and most of all, his sister, against his metamorphosis. The disgust is one thing, but how can they not feel any affection about their son/brother, that they want to get rid of him? It was Gregor who has provided for them before the metamorphosis, how easy it is for them to ignore his sacrifices!

In the next stories/journals, lack of recognition theme came again. In fact, I have jotted down aspects or themes that are interesting and quite often appeared throughout the book, here they are:

So I think, to better understanding Kafka, or the meaning of his writings, is to find the connecting thread. Unfortunately I am quite hectic at present to much analysis, but I think it’s safe to conclude that Kafka wrote this book out of disappointment of his own life and maybe, of the social condition. To what and why? I have still much to analyze… or do you know? Have you read the book? What is your conclusion?