The Fortune of the Rougons by Émile Zola 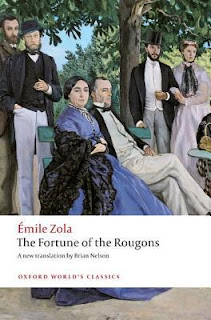 Finally I can get to where the Rougon-Macquart series starts: The Fortune of the Rougons.  The Rougon-Macquart is Émile Zola’s monumental study on heredity effect on human. He illustrated it in twenty novels about two families during French Second Empire. It all begins with Adelaide Fouque, an eccentric woman with mental illness who lives in Plassans (fictional town). She has one legitimate son from her marriage with a hardworking peasant: Rougon; and one illegitimate son and one daughter from the lazy and alcoholic poacher: Macquart.

Although growing up together with their mother after the fathers died, Pierre Rougon—being the legitimate child—feels superior to Antoine and Ursule, the Macquarts. Pierre’s fortune comes from the combination of clever and cunning maneuvers, while Antoine is too lazy to earn his living. Throughout the story, the two stepbrothers keep competing each other. On the other hand, Ursule marries a quite respectful man called Mouret. Her son, Silvère, lives with his grandma Adelaide. Apart from the eternal hostility between Pierre and Antoine, Silvère’s pure love for Miette. Pierre’s sons also contribute to the story, mainly through the trio Eugene the Napoleon’s intelligent, Aristide the left journalist, and Pascal the doctor and scientist. I believe Pascal represents Zola himself, the naturalist who was fascinated with how hereditary flaws could be descended to generations through families.

But what balances the disgusting acts of the Rougons and the Macquarts, is Silvere and Miette’s naïve love and heroism. The others’ greed to steal what they can from the coup d’etat, is counterbalanced by the young couple’s patriotic, though rather blindly, love for their republic.

The Fortune turned out to be quite entertaining story—much better than what I’ve expected. Its naturalism theme is distinguished here, as Pascal’s observation of the people is really Darwinist. And most interestingly, this book laid the foundation for the whole Rougon-Macquart series.