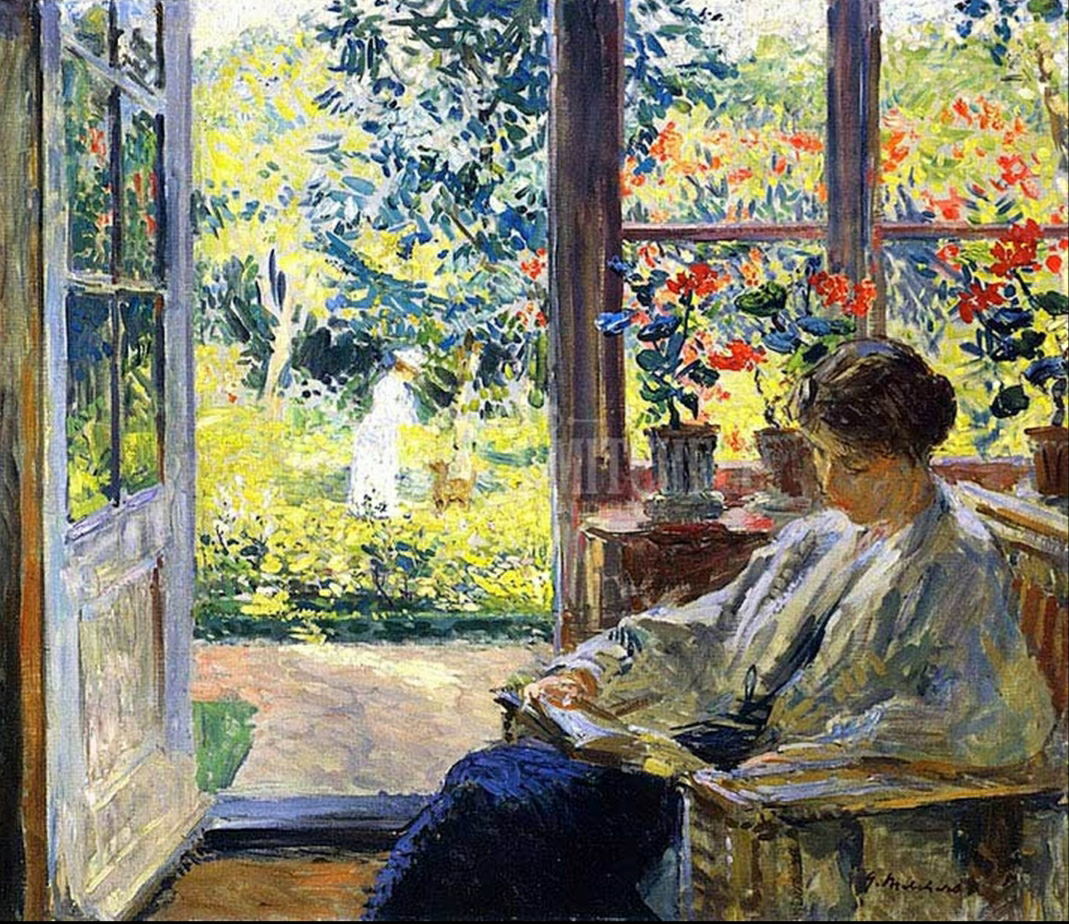 I am now on the way of finishing my only read for this month: Martin Chuzzlewit - only 50-ish pages left to go. February has been a hectic month - as usual - but I'm beginning to be adapted to this new condition. I'm quite proud that in between chores and work, I can still squeeze 25 minutes of exercise and 60 to 90 minutes of reading every day. And these days, when everything looks gloomy, I feel that reading is getting more and more important to keep me peaceful and stay away from depression. (Painting: Woman Reading By A Window by Gari Melchers)


📚 What I've Read in February

I've picked Martin Chuzzlewit to read for my #DickensInFebruary this year. And while I haven't entirely completed it, just considered it done, haha! At least, after reading quite many Dickenses, I think I can roughly guess what the ending will be, anyway.

I have to say, Martin Chuzzlewit isn't my favorite. The first two third is quite boring; the humours felt dry, and Dickens created too many trifle characters that I felt weren't necessary, except to prolong the story, rather than developing more of the main characters.

And so, I am now ready to face the new month!

📚 What I Will Read in March

March is promising to be an exciting reading month! My fellow Indonesian book, Melisa,  is hosting a buddy read of a short story collection from one of the most prominent Indonesian writers: Budi Darma. The book is: Orang-Orang Bloomington (or People from Bloomington in English). 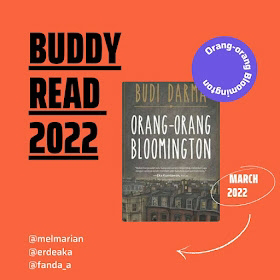 It's exciting for me, not only because I haven't buddy-read with Melisa for years, but also because this book is being translated by Penguin Classics, and will be published next April, yay! 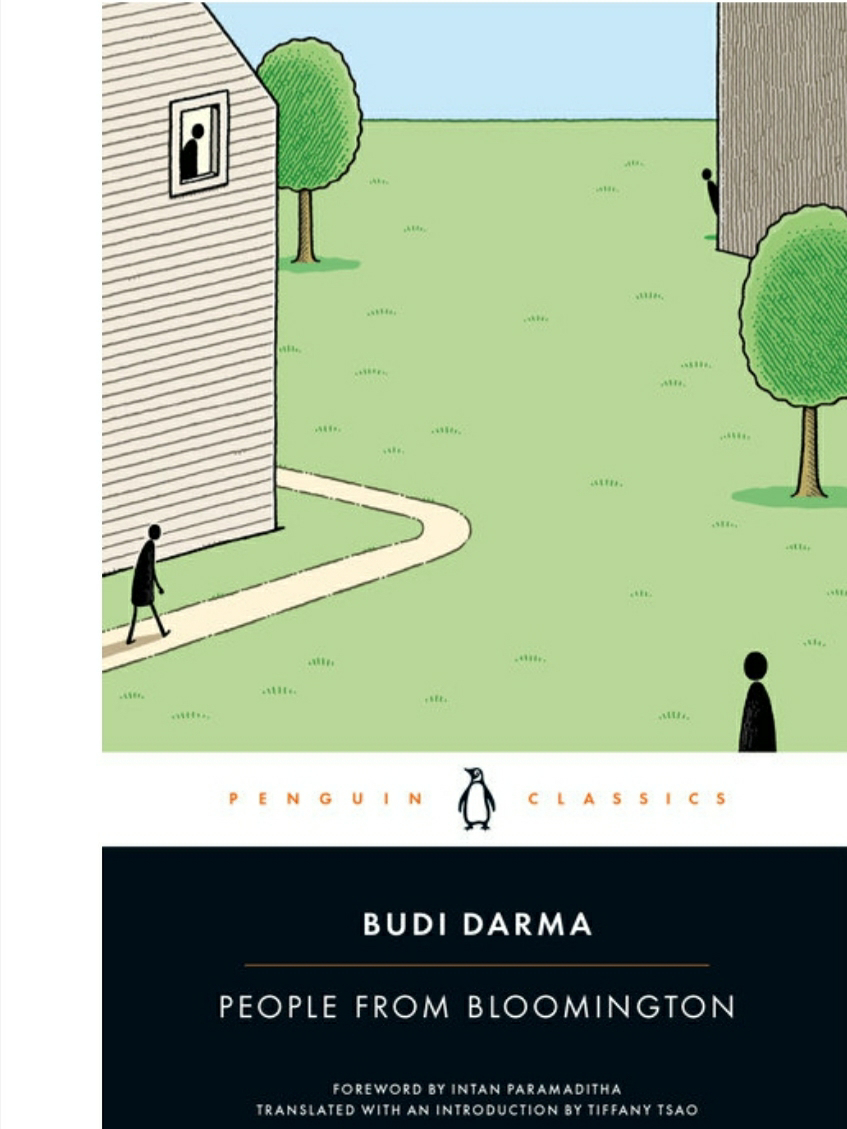 An eerie, alienating, yet comic and profoundly sympathetic short story collection about Americans in America by one of Indonesia’s most prominent writers, now in an English translation for its fortieth anniversary, with a foreword by Intan Paramaditha.

In these seven stories of The People from Bloomington, our peculiar narrators find themselves in the most peculiar of circumstances and encounter the most peculiar of people. Set in Bloomington, Indiana, where the author lived as a graduate student in the 1970s, this is far from the idyllic portrait of small-town America. Rather, sectioned into apartment units and rented rooms, and gridded by long empty streets and distances traversable only by car, it’s a place where the solitary can all too easily remain solitary; where people can at once be obsessively curious about others, yet fail to form genuine connections with anyone. The characters feel their loneliness acutely and yet deliberately estrange others. Budi Darma paints a realist world portrayed through an absurdist frame, morbid and funny at the same time.

It promises to be an interesting read (I have tasted the 1st chapter, and really liked it), and it would be such an honor for me to read it to celebrate its forthcoming recognition as one of most important Indonesian canons.

Next book I plan to read next month:

Go Tell It on the Mountain by James Baldwin

I picked that up simply for Back to the Classics challenge, and it's in my 300 Books to Read list, so I have no expectation at all. Sometimes it might be good to start an unexpected journey, and to be a little surprised at what one might find from it. Let's hope it'll be a good one for me!
Posted by Fanda Classiclit at 10:41 AM 2 comments:
Email ThisBlogThis!Share to TwitterShare to FacebookShare to Pinterest 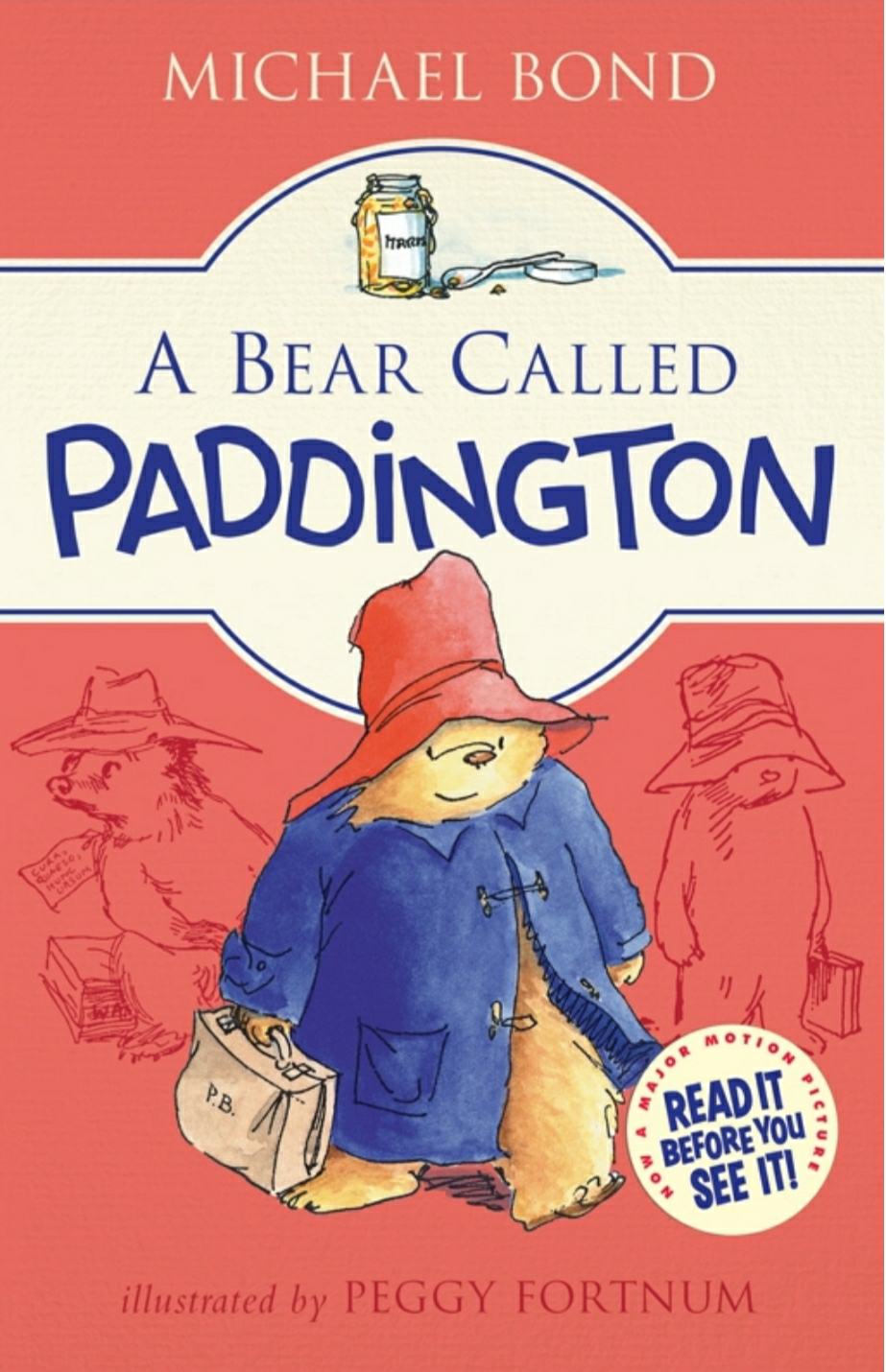 🐻 This is my first read of Paddington (and certainly not the last!) It seems to me that the more you aged, the more you need children books for comfort reading. Do you think so too?

🐻 I loved Paddington instantly when the Browns met him for the first time at Paddington Station, sitting alone on his battered suitcase, with a note attached to his coat that reads "Please look after this bear. Thank you."

🐻 Paddington is a young spectacled bear, who's just arrived from Darkest Peru (where his species used to be found). After a huge earthquake killed both his parents, he was raised by his Aunt Lucy and Uncle Pastuzo. Before Aunt Lucy entered a retired home for bears, she sent Paddington in a lifeboat to London. 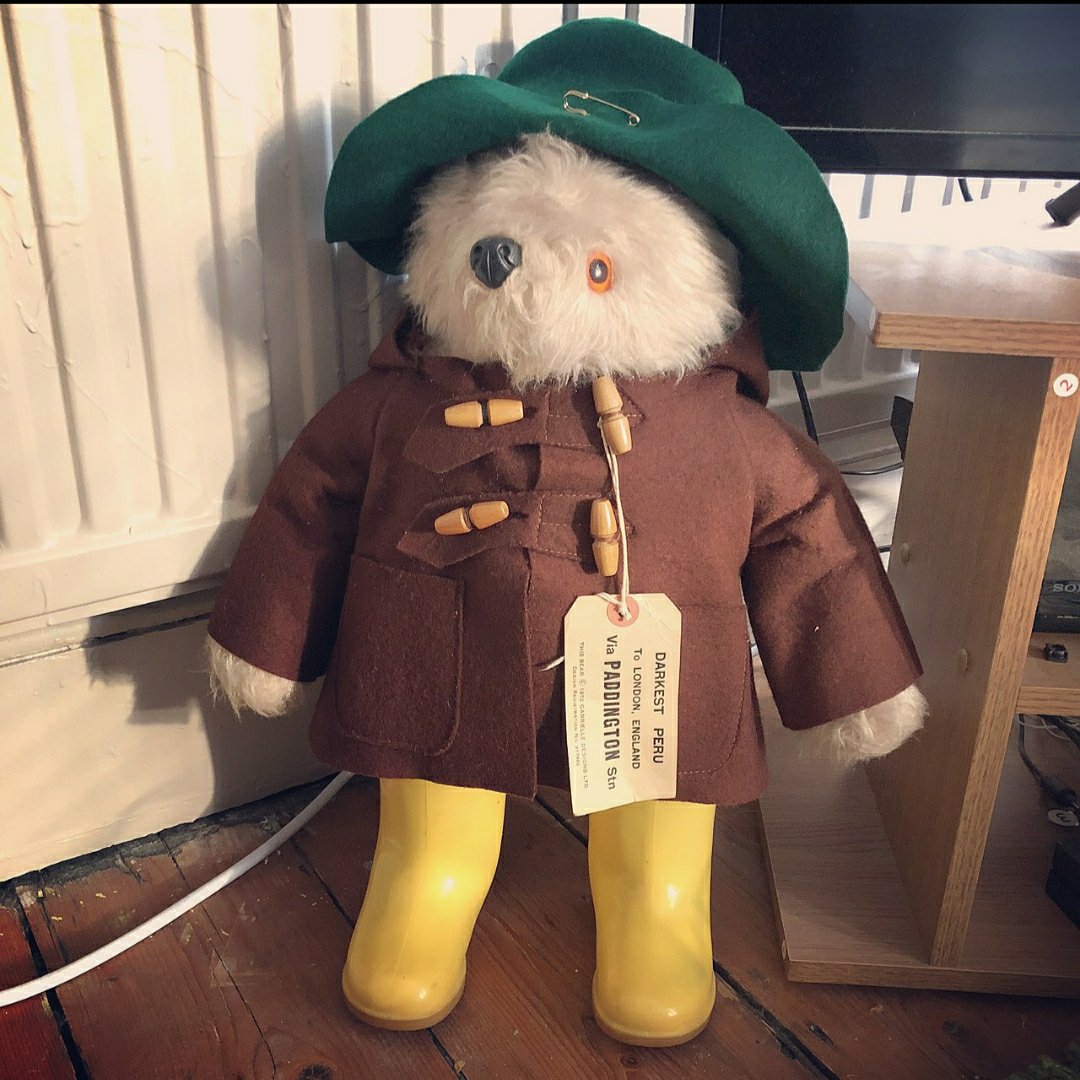 🐻 The Browns decided eventually to let the bear stay with them as a family member, and named him 'Paddington' from the station where they've found him.

🐻 I never like aggressive or mischievous children (both as a child and adult). That's why I'm very fond of Paddington, because he's wonderfully polite - rising his shabby hat (inherited from his Uncle Pastuzo) - when first greeting the Browns. He's also respectable and gentlemanly in manner and appearance. 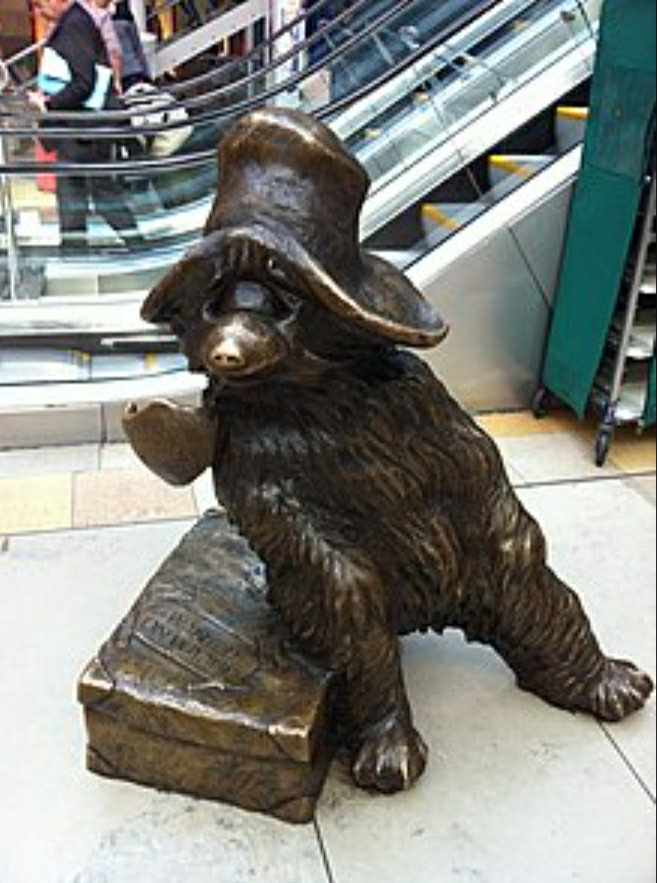 🐻 But a very quiet bear is rather unappealing in a story, you might think. Don't worry! Besides his politeness, Paddington has another quality: a tendency to please others and right what he innocently thinks is wrong. And from this latter, came endless troubles and hilarious adventures; of which, somehow, Paddington seems to bring more good in the end for himself and for others.

🐻 I loved all the Brown family members, but especially Mrs. Brown and Judy Brown - the daughter. Mr. Brown was hesitate to have anything to do with a bear at first. Nevertheless, he's so sweet in buying the creamiest buns for Paddington, knowing how fond he is of marmelade, when they were waiting for others.

🐻 I also loved Paddington's best friend, Mr. Gruber, the owner of an antique shop on Portobello Road, who always treats him with nothing but respect, discussing serious things with him, and calls him Mr. Brown. Oh, how cute is that? 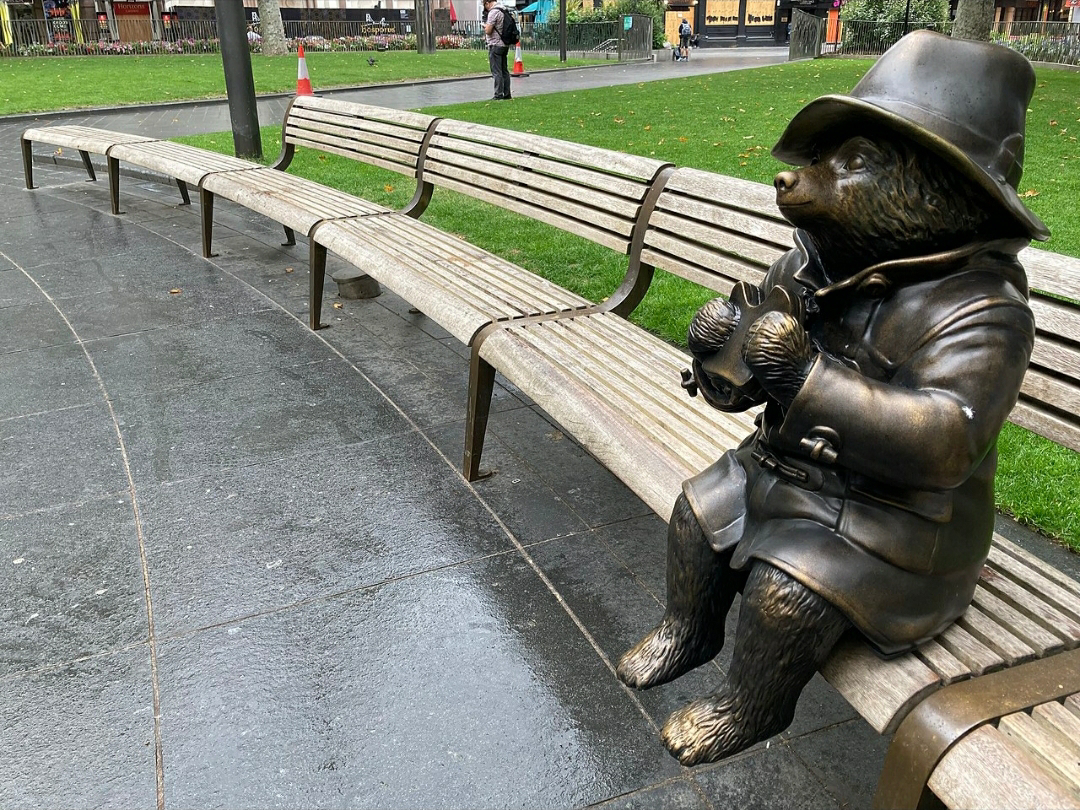 🐻 Paddington Bear is now a famous character from numerous novels (initially a compilation of several stories), picture books, and - later on - TV series and movies. You can even find his statues at Leicester Square, as well as at Paddington Station. And he truly deserves it. A smart talking bear with unique character and fine manner, with a hard stare that'll melt you when you say something disagreeable, how could one fail to love - and want to hug - him?