I have a slight regret to leave the Romanticism behind. It has been very entertaining, really! For a month we were brought to escape the harsh reality of life and enter the romantic, though fictitious, world. But, alas! Everything has an end, and now we must return to the reality. May Transcendentalism for #LitMoveRC begin today! The linky for May Transcendentalism is now opened; you can submit your reviews/posts until June 15th.

If last month we are discussing most excited movement(s) to come, our question of the month is the opposite:

After May Transcendentalism, which movement that you are least anticipated? Why?

Mine is the November Beat Generation/Bloomsbury, simply because I am not convenient with the freedom theme. I am wondering whether I’m going to like it, and whether I have chosen the most suitable book (to my taste). We’ll see then…

Meanwhile, I have finished Alcott’s Little Women for Transcendentalism, and will soon move on to Thoreau’s Walden. Hopefully I can still make it on time!

How are you progressing so far?

The Black Tulip by Alexandre Dumas 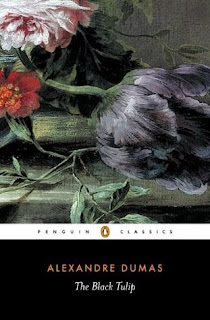 After my little disappointment with Ivanhoe, I must thank Alexandre Dumas, père, for once again brought me into the excitement of elaborate plot and romances, through The Black Tulip. Dumas’ novels always make me wonder whether this and that are historical events/characters, or just fiction; as he mixed both in such a genius way you won’t find the boundary.

At first I thought it would be the story of de Witts: Johan the Great Pensionary of Dutch (Prime Minister) and his brother Cornelis, who were lynched by the citizen because they opposed William of Orange. The attack was quite terrible; and it was more so because then I was not yet familiar with the dark history. But after that painful part, came the story of the tulip fancier and his envious neighbor. It was really entertaining, but at that time I didn’t get the connection with the political side, except that Cornelius van Baerle, the tulip fancier, was the godson of Cornelis de Witt. But, as usual with Dumas, the plot slowly intertwined beautifully and closed satisfyingly at the ending.

The Black Tulip combined the history of Dutch political environment and Tulip Mania during the Golden Age. The hero was a bourgeois Doctor with a passion on agricultural, but particularly in growing Tulip. As he was rich, Cornelius equipped his mansion with all possible resources to grow the finest tulips in town. His neighbor, Isaac Boxtel, was also a Tulip fancier but much poorer, who grew envious to Cornelius’ unlimited resources. Then came a grand competition held by the Tulip Society of Harleem, who offered a hundred thousand guilders prize for anyone who succeed in growing a black tulip without a spot of color, which has then never yet been found. But as Cornelius was in the final step of growing his black tulip—spied maliciously by Isaac Boxtel—came instruction from William of Orange to capture and put Cornelius in jail for helping the ‘traitors’ de Witt.

Did Cornelius put his ambition down, then, to grow the black tulip, as he was a convict? How could he manage to continue the labor? And don’t forget the envious Isaac Boxtel who planned to steal the black tulip and claim it as his own, to snatch the prize! Well, just trust Père Dumas; he would spice up the politics and flower fancying with high adventures and romances, that it would be difficult for you to not believing it as a true history. And as usual, everything would be put in its place satisfyingly for all, and mostly for us, readers.

Again, Monsieur Dumas has satisfied me beyond my expectation in this novel. Romanticism—with its unreasonable heroism—usually does not impress me much, but with Dumas, well… it’s just different. Four and a half stars for The Black Tulip!

I read e-book from Project Gutenberg

7th book for Literary Movement Reading Challenge:Romanticism
4th book for Back to the Classics 2015: A Forgotten Classic 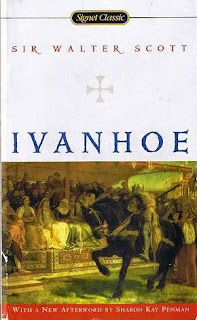 Although the book was titled Ivanhoe, I didn’t think Wilfrid of Ivanhoe is the most distinguished hero in this historical fiction. He was wounded and inaction throughout most of the story, and we only saw his chivalrous battle in the tournament, and then rescuing Rebecca the Jewess. And I disliked his attitude towards Isaac of York and Rebecca, though he was kindhearted enough to help them. Maybe it’s an ordinary sentiment against Jewish people at that time, but if so, what made him deserve the title hero?

I would choose Rebecca instead, she was an extraordinary woman. What she did was beyond any men in this story could do. She was a woman; with every limited source women might have at that time. She was also a Jewish, the cursed and marginalized race. Nonetheless, she was full of love and forgiveness to all who hated her race. What she had to endure was so great; but she was so calm and resilient. I think Rebecca was more Christian than those Christians. She was broad-minded; and always acted for the whole humanity, beyond community, race, or nation.

I read Ivanhoe a month ago—and had just enough time to do a proper review today—so I don’t quite remember the whole plot. It was set in England after King Richard I returned from the Third Crusades, around 12th century. England was dominated by Norman nobility, and Cedric of Rotherwood was the remaining notable Saxon family; he was ambitious to conquer the Normans, his mortal enemy. So, when he knew that his ward, Wilfrid of Ivanhoe, served King Richard who was Norman, he banished his only son.  The story began when some travelers stayed the night under Cedric’s hospitality. There they were joined by a palmer and a Jewish (Isaac of York). And then on Scott wove their adventures and intrigues; adding some other characters into it, so that their faith intertwined with each other, resulting an enjoyable story with intricate plot—as is usual with Romantic novels.

The appearance of Robin Hood and his “merry men” spiced up a bit the story; while the Templar with their strict rules added interesting side to it. But still, I sensed something is missing; I don’t know what… It felt like connecting several facts and figures into a story than creating one from the scratch.

Anyway, Ivanhoe is still quite an enjoyable piece of Romantic lit, for it is full with combination of chivalric adventures and romances. Though in the end you would ask, like I did, what’s special about Wilfrid Ivanhoe? Can you tell me?

Three and a half stars for Ivanhoe.