The Lord of the Rings by J.R.R. Tolkien

Right after I closed the last page of LOTR, I said to myself: "Finally... I have conquered thee!!" Indeed, LOTR has been one of books I dreaded most because of its length; but most of all, because fantasy is not my cup of tea. Someone told me to read it as myth, not fantasy; but even myth is my less favorite genre. Then too, people praised it so much that I felt I must at least give it a try. In fact I have tried years before, reading the Indonesian translation, but only after the first pages. I got bored, and gave up. So this time I 'forced' myself to read all the three books from first page to the last. And I did, yay!

As everyone seems to have read LOTR, I need not taking effort to write the summary. In short, a group of nine delegations was assigned to destroy a dangerous ring, lest the Dark Lord, who was rising in power, found and used it to rule the Middle Earth. Curiously, from the nine members, the fellowship composed of four hobbits—creatures that were famous of being weak and lazy (they were also called 'halflings'), one wizard, two men, an elf, and a dwarf. Trusting a job so crucial against such powerful enemy to some hobbits seems absurd. That Frodo is the ring bearer—because his uncle, Bilbo Baggins, was the latest owner and has bequeathed the ring to him—it was understandable that he was one of the delegations. Sam Gamgee is his esquire, so he too must go. But Merry (Meriadoc) and Pippin (Peregrin), why must they? But that is one of the most important points that lay behind this adventurous epic: minority and diversity.

While there was a wizard and a valiant knight and Lord (Aragorn), yet in the end, the greatest heroes were these halflings, who often hindered them during the journey, while complaining about food or pipes, aka the hobbits! I am glad that though people regarded them as "nobody", Aragorn, Legolas, and Gimli treated and respected them equally. That is why, I think, Boromir must go very early, because he was no team player; he was too much into himself.

Of the four, my favorite is Sam Gamgee. Here is a simple, warm, and honourable man.. err... hobbit. Heroism is when you face terrible danger, you are horrified and hopeless, yet you force yourself to go through, for the sake of something (or someone) dearest to you. And Sam is simply the highest hero here!

My favorite part is everytime Merry or Pippin was around. I enjoyed the comical or emotional side of their journeys, and how they fit completely with each other. Frodo, on the other hand, is too dreamy and felt a bit unreal to me. At least his hundred-years-old uncle Bilbo was much more vigorous (in The Hobbit) than him.

Finally, of the three books, I liked Book 3 (The Return of the King) the most. Book 1 (The Fellowship of the Ring) is full of flat narration on Middle Earth and its people, and it instantly bored me. The names of the houses, mountains, lands, country, and I don't know what else, overwhelmed me from the first, that I neglected them altogether since Book 1. Book 2 (The Two Towers) was more enjoyable, but the best was Book 3. Overall, LOTR is the modern version of epic fantasy written in poetic prose. Despite my satisfaction of finally reading it, the journey has been rather a struggle—I skipped most of the songs and description of woods or lands. Again, fantasy is not yet my cup of tea (Harry Potter is the only exception), and through the book I have longed for ordinary lives!

Posted by Fanda Classiclit at 2:22 PM 10 comments:
Email ThisBlogThis!Share to TwitterShare to FacebookShare to Pinterest
Labels: Back to the Classics 2018, fantasy, J.R.R. Tolkien, The Lord of the Rings

The Disappearance of Émile Zola by Michael Rosen 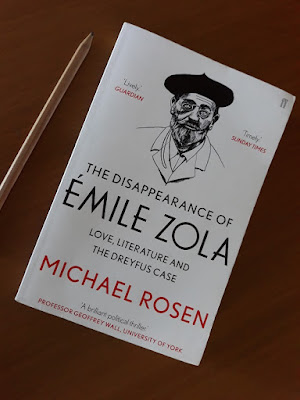 Alfred Dreyfus was a Jewish army officer who was falsely accused of treason (passing secrets to Germany). Perhaps it was the fact that he was a Jewish, that blew out the case into anti-semitic issue, which then torn France into two bitter sides.

At that time, Zola has established himself as a successful writer, having just finished his ambitious literary project: the Rougon-Macquart series. He could have stayed at home with families, enjoying his wealth and comfort while, perhaps, preparing for his new novel. But no, Zola, who was not a politician, plunged himself into the war with his open letter: J'accuse!, defending the innocent Dreyfus. Then Zola—who loved his country, and has put huge efforts in creating the Rougon-Macquart for the sake of his beloved France, and even risked his life and reputation by taking side with a Jewish—was now found guilty of libel. His friends decided that he must flee from Paris.

Michael Rosen compiled old notes, journals, letters, and newspapers on the events around Zola's exile, and then recreated them into this interesting story. This book does not only record the whole episode from the night Zola fled to England to after his death, but also reveals a different side of Zola's personal life which was rarely exposed: his intimate life with his wife and his mistress. Let's unwrap it all here...

Zola's English was zero, and he was 'forced' to leave France at night by train, bringing only a pack of nightshirt and a piece of paper with the name of the hotel written in it. Imagine... forced to leave your beloved country, snatched from the warmth of family and loved ones, and arrive in a foreign country where you couldn't speak the language; alone, wretched, and abandoned. No wonder that Zola suffered at least two nervous breakdowns during the exile.

There are several new and interesting facts around Zola's exile I got from this book. First is his intricate love life. I already knew about Zola's childless marriage with Alexandrine, and about his much younger mistress: Jeanne Rozerot, who gave him two children: Jacques and Denise. But that Alexandrine, when she learned about the affair, rushed to Jeanne's house with rage; or how the two families always stayed not far from each other (either in Paris, or Zola's house in Médan, or in Verneuil); that Jeanne and the children always stayed nearby—that, I had no idea. And from this account, I suddenly had a high admiration for Madame Zola. That, I thought, is the true wonder woman. It was not uncommon in 19th century for a gentleman to have mistress(es), but it was usually kept discreet. That the wife accepted the mistress into the family (though lived separately) and 'shared' the husband (stayed with the wife in the nights and the mistress in the afternoons)—that was really unconventional.

I began to imagine Alexandrine—strong willed and respectable woman, but with tender heart too. She must have lived desperately through rage, shame, and jealousy, but she loved her husband so much (otherwise she wouldn't sacrifice that much) and knew that she must save his reputation; that he needed peace and comfort of a home and surrounded with hid children to produce his masterpieces, so that in the end she finally accepted the bizarre arrangement. I imagined it was she who has found a small quiet house round the corner for Jeanne and the children, and she perhaps also managed to provide household needs for the 'other' house, all for the convenience of dear Zola. How she endured questions from the neighbors? Or maybe it was so common that people didn't talk about it? How she must have felt when Zola went there? Knowing that Zola felt more at home there than at her own house? That Zola did not love her as a woman (I think he respected her and treated her like a best friend—someone that always understood him), and how he always looked happier when he was there. Well... it must have been terribly hard to endure!

But I was rambling here... Another interesting point I have also learned from this book is 'Zolaism'. Around that time, writers who dared to write about sex scenes or other vulgarities were accused of Zolaism. Zola's influence was widespread later and can be found in the works of Henry James, Thomas Hardy, George Bernard Shaw, and many more. But before, his books were banned and rejected. His translator and publisher Henry Vizetelly was imprisoned and fined for translating and publishing Zola's La Terre, and finally died following his ruin. Why La Terre? Only if you have read it, you would know why. But the funny thing is, they particularly questioned the passage where a farm girl (I forgot her name) assists, with her hands, her bull to mate with a cow. That passage they found vulgar, but not the rape scene?? Strange…

There is also Zola's photography. I came to know in detail how Zola was obsessed with his new hobby. I haven't related it with his extraordinary writing method at first, but this passage intrigued me:


In relation to his writing, Zola claimed that his visual memory was equipped with an ‘extraordinary vividness’ and that he could evoke objects he had seen in ways that meant he could see them again as they really were. Photography supplemented and enlarged this for him and is linked to what he thought of as the scientific approach to writing.

Remarkable, is he not? It made me quite interested in his photographer side now. In fact, I have ordered a book on it: Zola - Photographer (edited by Massin), a compilation of about 200 photographs by Zola.

In his later work: Travail, and in educating his children, Zola interestingly viewed work as something pleasant, satisfying, and the source of happiness, instead of as obligation or labour. Travail is the third of the Gospels series. I loved this part because it reflected my personal view. Work has become my second hobby, besides reading (obviously), and my life feels complete only when these two fields are balanced.

There are so many things you might find in this book that I can’t share here lest this post becomes tedious (and I have not yet talked much about his disappearance!). Anyway, my admiration grew higher still for Zola, after reading this book. He is not only a great author, but also a very brave man to stand (almost alone but a few supporters) against injustice and to fight for the truth, by sacrificing a lot in the process (his career, his happiness, and almost certainly, his life—it’s never officially approved, but I’m almost sure that he was really poisoned to death by his opponents)! To me, he is a hero.

Rosen has done his job very well, but for inserting his own short story in the end. What was the purpose? It really ruined his efforts in bringing the inside story of one of the greatest authors that France (if not the world) has owned. Therefore…


“Paris, look what I’ve done for you! And yet this is how you treat me!” ~ Émile Zola