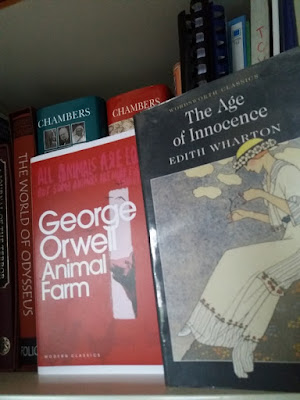 As usual when the last three months in the year is coming, hectic is all around me. I still can catch up with my reading pace, but not with reviews. So, here are my mini reviews of two books I have finished—the eighth and ninth of my second The Classics Club challenge (three more to go for this year!).

This is my first Orwell; 1984 will be following soon. It is an allegory of Stalinism—a concept I have had, until now, only a vague notion of. Orwell wrote it to satirize Joseph Stalin, with whom the UK was in allegiance with when the book was published (1943-1944). Orwell did his job well, anyone who read it would clearly see the message, and the fable is convincing and entertaining. I have only one question: What has become of Snowball? While the end of the fable was quite predictable, Snowball’s condition was one thing I looked forward to when approaching the end. But that was not the main focus of this book, of course. All in all, four of five stars I granted for Animal Farm. It is not striking, but quite inspiring and entertaining, and definitely well written.

The Age of Innocence by Edith Wharton

I have no idea what criteria make a book earning Pulitzer Prize; but to me Wharton’s The House of Mirth is much finer than The Age of Innocence. The story is about old vs modern world of New York society. My favorite character is Countess Ellen Olenska. She is genuine, kind, and brave. She sets the example of being modern woman without compromising her conscience and integrity. Maybe she was to be the “victim” here, just as Lily Barth in The House of Mirth, but my sympathy, instead, is more for Newland Archer. I think he was the real victim; he was dragged by the old and the modern New York. Unlike Ellen, it seems that Newland doesn’t have a firm ground to stand on. And the ending is so devastating. I can’t imagine having a life like Newland’s: dry and hollow… for the rest of his life. All in all, it is not as I have expected, but still a treasure. Four of five stars.