Fighting to Complete My Classics Club Project by Next Year!

Okay, time flies, indeed, too fast! When I started The Classics Club Project in March 2012, five years seemed so far away, I believed this project would be quite an easy one. I was wrong! Yes, the first two years my progress was quite fast. Since then I have updated and added a lot of books to my original list of 100. But today I realized for the first time, that my deadline would be 8th March 2017—only 10 months from now! If I still want to complete this project, I must work out very diligently…starting today.

My current list is 165 (I know… I was too ambitious then!), which is impossible to complete all in 10 months. With my current speed, 2 books a month, I think, is the most realistic. So, I trimmed down my list to 125, which means I have 20 classics to read by March 2017. It would not be an easy conquest—not with my current activities, plus I am selling our old family house and buying a new apartment this year. No, it would be very tight, but I’m prepared to push myself to the limit. Then, let’s see what I can achieve by March next year!

And, as I would soon need a lot of money to furnish the new apartment, my trimmed-list consists only of books on my TBR pile. Here they are in random order:


Plays:
3 plays, each from Marlowe, Ibsen, and (perhaps) Wilde

Posted by Fanda Classiclit at 12:14 PM 18 comments:
Email ThisBlogThis!Share to TwitterShare to FacebookShare to Pinterest 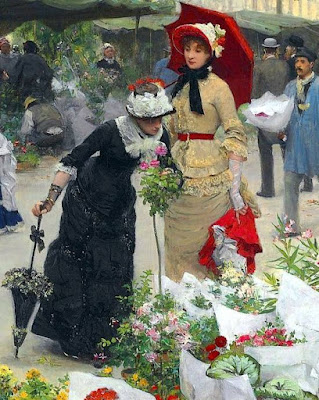 Victor Gabriel Gilbert (1847-1935) was a French painter of genre scenes. Gilbert was born in Paris on 13th February 1847. His natural ability for drawing was acknowledged at an early age but due to financial circumstances he was required to work as an artisan. He received his formal training from L. Em. Adan, Levasseur and Ch. Busson.

In 1873 he had his debut at the Paris Salon and continued to be a faithful exhibitor at the Salon des Artist Francais where he obtained a silver medal in 1889, received the Bonnet Prize in 1926 and the Knight of the Legion of Honour in 1897. He was highly respected for his fine detailed work and was considered an inspiration to many artists. His views of the colourful Parisian life, the boulevards, cafés and flower stalls became well known. At the same time he turned his effect on the portrayal of adorable children, accomplishing a sensibility and great harmony towards his subject.

Any Zola's fans must have remembered that this paintings was used by Oxford World's Classics as The Belly of Paris' cover. Such a nice idea too to pick a painting from one of Belle Epoque's artists. I imagined... maybe Gilbert was one of Zola's Impressionist friends...

It was during the mid 1870s that Gilbert became a close friend to Pierre Martin, one of the principal supporters of the impressionist movement and Victor Gilbert’s paintings secured a place amongst his collection of Impressionists like Monet, van Gogh, Cezanne and Gauguin. Victor Gilbert’s paintings were not only well sought after in France, he also exhibited in 1883 in Munich, 1894 in Vienna and he was a great success in London in 1908. Today his work can be viewed in the Museums of Bayeux, Besançon, Bordeaux, Dieppe, le Havre, Lille, Liége, Nice and Strassbourg.

I posted this for my Belle Époque Event 2016, You will find more artists along the year; the next one will be up (hopefully) very soon! 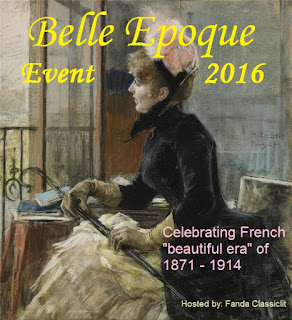