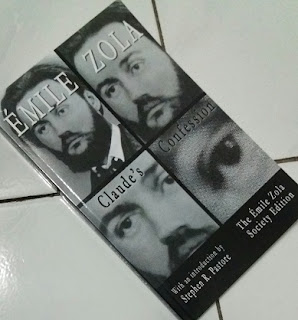 Is this book really Zola’s most autobiographical novel? Maybe some of Zola’s hardcore fans have been curious about this. From the biographies I have read in books, introduction to Zola’s novels, or Wikipedia, I learned many similarities between Zola’s early life and the story plot of Claude’s Confession. Both Claude and Zola came from small rural village in very young age, and suffered from poverty and culture shock while living in Paris for the first time. But beyond that, I don’t know how many of the plot representing Zola’s real life or thoughts.

Like Zola, Claude must leave his rural life, and bunch of friends, to live alone in Paris. He felt lonely and out of place, that his only consolation is by exchanging letters with his friends. The main theme of this book is Claude’s passionate love over a tart named Laurence, whom he took in his place out of pity. At first he was disgusted of her vulgarity, and even determined to “purify” her. But from disgust came passion. Claude became passionately in love with Laurence. It was an unrequited love, though, since Laurence, who has been living in the street, has never known the pure love which Claude offered her. This ignorance made him extremely sick; then he began to lose senses.

This might be far away in plot and style than Zola’s more mature novels, but nonetheless, is quite interesting. I can sense Zola’s brilliant way of dissecting his characters psychologically, to study how it would react; exactly the way he would do later on in his Rougon-Macquart series. If you have been familiar with his books, Zola’s characters always have one extreme tendency (or madness). It could be the possessive love for money, sex, or even of land. In Claude, it was the obsession of purity and innocence. Claude’s ideal girl is one with pale complexion and virginal timidity (I have read somewhere that it’s also Zola’s taste of women—don’t know whether it’s true or not). And just the same as in his other novels, this madness is always ruinous. It’s as if, when you have this tendency, you would certainly go down into the bottom.

If you have interest in psychology, this novel will amuse you. For mere entertainment, it’s rather painful. But if you call yourself Emile Zola’s fan, well, I believe this novel would interest you to learn how Zola ever began his literary genius.

Posted by Fanda Classiclit at 10:53 AM