One Flew Over the Cuckoo’s Nest by Ken Kesey 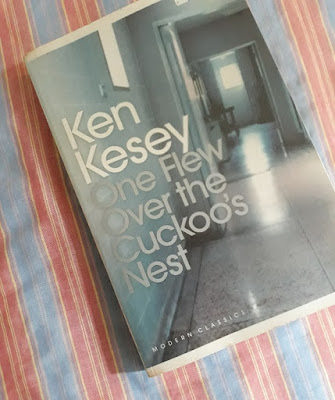 A friend once told me a story (a true story, said he, though I never verified it myself) about an experiment held in prison, which would prove that you could only see one's original character when you put him/her into absolute power. Put someone nice and kind to be a prison warden, with absolute power, for a period of time, and see if his personality wouldn't change after that. This story came back to me while reading this book.

One Flew over the Cuckoo's Nest is about a psychiatric hospital ward ruled by a dictatorial Head Nurse. It was told from the point of view of 'Chief' Bromden, a half Native-American who pretended to be deaf and dumb. Nurse Ratched ruled the ward iron-handedly. Despite of having no credibility in mental health, she decided what's best for the patient's health, just to make them docile. Everyone (the patients) knew that they were treated unjustly, but nobody dared to oppose her. The punishment of disobediences was electroshock therapy, which was a common practice in 1960s as a cure to mental disorders.

Then one day came a new Admission into the ward, an ex-con man named Randle McMurphy. He's rebellious; and from the beginning he resisted Nurse Ratched's authority. He began by annoying her; then gradually resisted her rules or instructions. Soon he became a hero and inspiration for the other patients. The fight is now up between McMurphy and Nurse Ratched; but can the patients really fight against the authority?

One Flew is all about abusive power. It's not just about corrupt leaders, but, as Chief Bromden calls it, the Combine – meaning the wider part of the society. Ken Kesey has interestingly picked insanity for his story. What is insanity? Who decides what is sane and what’s not? Aren't we all created by God, and are, thus, equal, though different and unique? We often label others who do not act, think, or react as our standard, as insane. We don't want to deal with them, or to be burdened by them, so we put them into asylums "for their own sake".

What struck me most of this book, is the fact that most of the patients are as normal as we are. Some were committed, but some came there involuntarily. Involuntarily! They were rejected by the society because they were out of the standard, and therefore must be thrown out of our presence – or, in Chief Bromden's case, because he is off a different race. We talk a lot about xenophobia now, but I think it has always been human race's weakness from the beginning.

In short, this is a very disturbing book. It forced you to realise the real problem of our society – is it not we, our family, who have created it in the first place? Then the solution must have been by changing our point of views, instead of changing others' to fit ours.

The patients in McMurphy's ward were lucky they had someone as brave as him. One man might not have succeeded in overthrowing a powerful authority, but his actions would not be in vain; it might encourage and inspire others to not let anyone else controlling our lives. I also loved the way Kesey put a tiny spark of hope by Chief Bromden's ending. He really deserves it, because his case is, I think, the greatest injustice of all the others.

This book is not really a perfect reading for opening a new year, but The Classics Club Spin #CCSpin has chosen it for me, so I must relent. However, far from regretting it, I'm grateful to have read and been inspired by it.

Posted by Fanda Classiclit at 8:52 AM
Email ThisBlogThis!Share to TwitterShare to FacebookShare to Pinterest
Labels: #CCSpin, 20th Century, America, Humanity, Ken Kesey, One Flew Over the Cuckoo's Nest