This Earth of Mankind by Pramoedya Ananta Toer (An Indonesian Clasic) 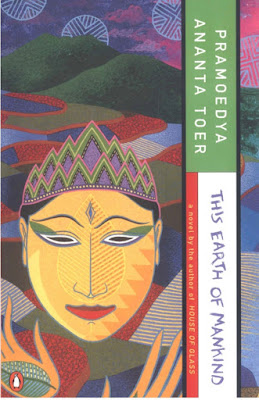 Finally, I came to read this book which is considered one of the highest achievements in Indonesian literature. Set in the end of 19th century during Dutch colonialism in Indies (Indonesia), this book highlights the injustice imposed upon Indonesians (particularly the Javanese) by the Dutch for three and a half centuries.

Before continuing to plot summary, let me explain first about the ladder of social status at the time. On top, of course, was the Pure Blood - Dutch or other Europeans who lived in Indies. Below them was Indo - children who were born from European and Native (most are illegitimate); while the bottom are inhibited by the Natives. These statuses set their rights in all life aspect, from education, cultural, to legal.

Pramoedya Ananta Toer, who first 'wrote' the story orally to fellow prisoner when he was a political prisoner by Indonesian government, told the story from Minke's perspective, a Javanese - thus a Native. Descended from a prominent family with royal blood, Minke was able to study in H.B.S (the Dutch school), which at that time were exclusively attended by Europeans or Indos. One day he met a proud and remarkable woman: Nyai Ontosoroh. Nyai means Native concubine of a Dutch man. When she was a young girl of fourteen, Nyai Ontosoroh was sold, without her consent, by her father to Herman Mellema, a Dutch businessman. Her Humiliation encouraged the Nyai to passionately teach herself of science, business, and literature, under the guidance of Mr. Mellema. She soon became a cultured and intelligent woman, far superior even from any European or Indo women.

Minke was impressed by this enigmatic woman and her wisdom; and from his frequent visits, he soon fell in love with Annelies, the daughter of Nyai Ontosoroh and Herman Mellema. Through his study at H.B.S. and his involvement with the Nyai, Minke became an open minded person. He believed more and more in the equality of men; and unlike most Natives (including his own family), he was bold and confident towards Pure Bloods or Indos; whereas before, he had a slight inferiority towards his school buddies or teachers. Minke also proved that he was a good writer. His future seemed bright, especially after marrying the beautiful Annelies. Now he had everything that others could only envy.

Then a tragedy came, and like a snow ball, it shattered and smashed all the liberal people's lives and hopes, one by one. Annelies, that poor fragile woman, must endure the pain of being separated from her beloved husband not long after their marriage. And although their marriage was authorized by Islam law, it was later considered illegal by Dutch law. Their lives and happiness were torn apart by a mere piece of legal paper authorized by the colonial government. As much hope as Minke and the liberals have ever put for a better future of the Natives, this tragedy reminded them of their complete helplessness under the colonialist. This Earth of Mankind criticized the abuse of humanity because of ambition, arrogance, and greediness of the colonialist; because one nation regarded itself higher than others.

This book might not be my favorite, but it struck me of how far the colonialism had shaped Indonesian character as a nation today. We have had our independence 74 years ago, but most of us are still so much alike the Natives in this story: the inferiority towards European (or foreigners), the laziness, the ignorance, and shallow-mindedness. Would we be like this if history had been kinder to us? Or has it already been like that far before the colonialism era? We might never know...

One thing I liked from this book is the way Pram created divers characters to portray many different views and interests of those who were involved in the colonialism era. There's the liberal Pure Blood such as Magda Peters, Jean Marais, and Doctor Martinet, whose views were beyond race, but more on personal qualities; while other H.B.S. teachers and most of the Dutch considered the Natives as low as animals. Then there was the snobbish Indo such as Robert Mellema, who hated the half Native blood in his veins and wanted to be taken as European; while Jan Dapperste, the Native who was adopted by European parents, hated his name, and even run away from his parents when they wanted to take him to Europe, because he preferred to stay in his native land. Pram let us "live" in the heart of colonialism era through his characters - that's the main interest of this book, compensating Pram's writing style which, though vivid and bold, is not very special. I hated, though, the scene where Minke chased Darsam to the neighbor's house; I couldn't understand why Pram ever wrote it ridiculously similar to a cheap soap opera scene! That scene alone deserved one star off of what I have intended to give this book.

On the other hand, I could mostly relate to Annelies's character. In Goodreads, many readers slander her personality as spoiled, weak, and egotistical. But I happen to know at least one real person who is similar to Annelies: my own dearest mother. I don't know what you call that... hmm.. symptom, illness? But like Annelies, my mom is never able to live independently on her own; she needs to cling to someone who loves her and accepts her as she is, and whom she trusts. As a young girl my mom was very depended on her ailing older sister. Then when she (the sister) died, my mom was so depressed and unstable, that the psychiatrist advised my father (who at that time has been attracted to my mom) to marry her very soon, as to give my mom a new solid "pillar" to cling to. What I tried to say is that there are some people in this world who are very dependent to others, not out of laziness or childishness, but because of their mental deficiencies. Annelies, I suppose, is one of this kind. And if we tear this kind of people off their "safety net", it would damage their mental balance. They tend to be suicidal too, which make it more dangerous. On this story, Annelies has also gone through these symptoms, from her calm but dispirited, into her subservient manner, before the Dutch brought her abroad. You can imagine how I was shudder while reading through this part! I kept screaming inside my head: "No, no, please don't do that, have mercy!" For it reminded me very much of my own mother; I imagined, if this should have happened to her, I know she would have never survived. And so, if Pram really knew about this mental problem, I predicted Annelies would have either gone crazy or committed suicide in the next book. Oh, have I told you that This Earth of Mankind is the first book of Buru Quartet?

Considering all the strength and weakness of this book, my final score is: