The Secret Adversary by Agatha Christie 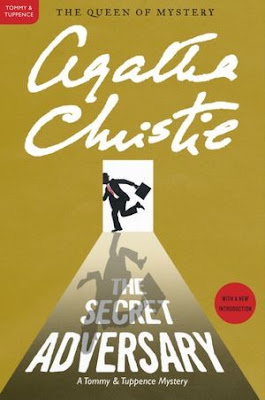 On Friday, 7 May 1915, during World War I, RMS Lusitania was torpedoed by the German, and sank down the sea near Ireland. On board was a young British intelligent officer who was carrying a secret document. Seeing that the women had bigger chance to be rescued (because of 'women and children first'), he trusted the oil skin packet containing the document to an American girl.

Fast forward to 1919, when the war was over, two childhood friends met: Tommy Beresford and Tuppence Cowley. They were jobless, broke, but also restless. I guess there were many young people felt the same at that time. Tommy was a demobilized soldier, and Tuppence was ex war-volunteer. Jobs were scarce, and they were penniless. In the meeting, Tommy casually told Tuppence an interesting conversation he overheard on the street about a girl called Jane Finn. This particular passage was actually inspired by Christie's own experience; she overheard two women speaking about a Jane Fish – ‘what an extraordinary name!', thought she. Christie then used it, after changing the last name from Fish to Finn. Tommy and Tuppence concluded their meeting with a decision to form a joint-venture business: the "Young Adventurers, Ltd", planning to take any job they happened to encounter. A Mr. Whittington overheard their conversation, and interviewed Tuppence with the aim to recruit the young partners to do a secret job. When being asked to introduce herself, Tuppence didn't want to give her real name, and instead blurted out the first name popped in her head: Jane Finn! How Mr. Whittington was enraged and shocked on hearing it, and literally sent her away.

Intrigued by that event, Young Adventurers decided to publish advertisement, requiring any information about Jane Finn. They got two replies. One from a Mr. Carter, an intelligent leader, who explained that Jane Finn was the young girl who was trusted the secret document onboard Lusitania; that she has survived, but then gone missing for years. Mr. Carter recruited Tommy and Tuppence to locate the girl and get the document, which was now more dangerous than ever, as it will compromise the Government if it fell in the hand of a powerful enemy, who was now emerging. At the same time Mr. Carter warned them of a mysterious and dangerous 'Mr. Brown', the powerful mastermind behind the enemy whom no one has ever seen.

The second reply of the advertisement was from Julius Hersheimmer, a young American millionaire, who claimed to be Jane Finn's cousin. Without hesitation he was willing to fund the Young Adventurers to find his cousin. Tommy and Tuppence set at once to work, amused at first at their ability to secure their first job so fast and easily. But then, things began to unfold. They were forced to go separate ways, following different trails, entering dangerous zones, and always... shadowed by the presence of the elusive Mr. Brown.

The Secret Adversary is Christie's second detective novel, but it was already very different from her first: The Mysterious Affair at Styles. While Styles was narrower in scope - a murder in a close family, Secret Adversary took a national crisis, intelligent service, and a coup-d'état attempt. In Styles we met a retired crippled detective Hercule Poirot; here a vigorous young amateur couple. The slow pace in Styles is the exact opposite of fast-paced Secret Adversary. Personally, I much prefer the family or small-country-murder cases, one thing which set Agatha Christie apart from most of her contemporaries. However, I  liked Tommy-Tuppence's chemistry - not mentioning their cute, shy romancing throughout their first (of four) adventures (I liked the later less, due to the lack of this aspect). I also enjoyed following their warm and witty interactions, and loved how the sensibility and calmness in Tommy worked perfectly well with the intuitive and imaginative qualities in Tuppence. As Mr. Carter said, their differences complete each other.

In the end, the suspects for Mr. Brown were narrowing down to the three men  the young adventurers have trusted and involved in the adventure. As usual, the culprit is always the one we least suspected. I have been 'deceived' in my first reading about thirty years ago; but I also vaguely remembered the happy ending of the girl who suffered most in this story, which helped me to remove a certain man from the suspects list. This is the disadvantage of rereading mystery/detective novels; the surprise gets less and less with each reread.

Anyway, it was a thrilling and enjoyable suspense, worth of rereads (but only every ten years or so when you have forgotten most of the plot, ha!)