The April prompt for A Classic Challenge picks Cover as the topic. It’s a good choice I think, because cover—especially in classics books—speaks strongly of the entire book. Actually I read 3 classics this month, but I will choose to discuss The Great Gatsby by F. Scott Fitzgerald. I picked the Indonesian translation, published by Serambi: 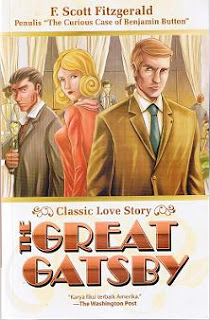 What I like the most from this cover is the color, soft beige, which is the first thing that attired my attention to the book. There are three persons, two men and one woman are standing in the middle of a party took place in a mansion. That was my first impression of this cover, and it turned out to match the book theme. The luxury party and the snob expression of those three persons could reflect the moral decadency of the “Jazz Age”. However, I can’t make a guess of who’s who in this cover. The man in the front, is it Gatsby? Or Tom? If I was the illustrator, I wouldn’t picture Gatsby like that. Gatsby, I think, is more a dreamer than a snob (like the impression of the man in the front). I would rather picture him as a gentleman with self esteem, who is throwing his gaze afar, as if he is looking his fixed target, knowing that he will soon achieve it. I found this cover that perfectly reflects my idea:

I also found another cover which accurately pictured Gatsby’s pose when Nick saw him for the first time, pointing his finger to the small green light from across the river. It reflects perfectly about dreaming for the future, reaching something that you can see from where you are standing. However this cover is too gloomy, you’d think it’s a gothic book! No, I won’t pick this!

Back to the cover I am discussing, if the man in front is meant to be Tom, it would be strange because this book is about Gatsby, so it must be on Gatsby the cover is focusing. Well, I don’t know…and as the publisher didn’t put the illustrator name, I can’t ask him/her either. Overall, it seems that the woman (Daisy) is torn between the two men. She perhaps will choose the man in the front (Gatsby I presume), but she is somehow still attached to the man behind (Tom I presume), who is staring at her sharply, afraid of losing her. All in all, the whole cover can reflect the story quite well, but I think it’s poor in reflecting the character itself: The Great Gatsby!

Posted by Fanda Classiclit at 8:13 AM