The House of Mirth: Final Review 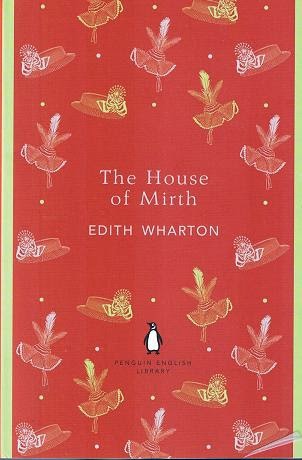 I think I have just found a favorite female author, who can be juxtaposed with Zola’s genius, intense, and beautiful naturalist style: Edith Wharton. The House of Mirth was my first book by her, and I loved it so much!

Lily Bart is 29 years old, and in the turn of the century, a girl of her age should have married. Lily is very charming, but she is a poor orphan girl who depends on her conservative aunt’s generosity. Nevertheless, she can make her way in the socialite world. Since it is her only world; she has grown up and was brought for one aim: to get a rich husband and live comfortably. The problem was not that no one attracted to Lily; on the contrary, she was charming and intelligent, and had many admirers. Lily’s difficulties started because she could not make her mind of what she really wanted. On one hand she needed to marry a rich man to support her luxury taste, while on the other, she yearned for the freedom of choosing her own life. Through the book she constantly had this doubts; and as she was too lazy to make decision, she kept putting the problem behind, until it exploded, and drown her down.

It might not become too bad if Lily has lived in our modern era. However—and this is what Wharton wanted to emphasize—in the late 19th century, American high society only cared for money and fame. Whoever had one or both would be welcomed to the circle; they didn’t care about morality. Friendship and love were often depended on status; one would praise immoral men and women if they had influences, which one could benefit to step higher on the ladder of so called society. In this circle did Lily accidentally hurt a rich and influenced woman, and in order to take revenge—and to divert attention from her scandalous affairs—she spread negative issues about Lily to ruin her reputation.

In the midst of hypocrite society, a girl would certainly ruinous just because of one vague scandal, no matter whether she really guilty or not. And since Lily was poor and did not know other life apart from what she was brought up for, she could not runaway from the ruin. Her friends knew that she was innocent, but they could not help her lest their ‘patron’ abandoned them too.

Like Zola, Wharton was a naturalist too; their style has a strong similarity, although Zola’s is stronger while Wharton’s a bit softer. Like in Zola’s, I loved Wharton’s metaphors and her beautiful prose, like in this passage. In terms of naturalism theory, The House of Mirth tells us how human being is produced and shaped according to their natural habitat. Wharton also pointed out the moral corruption on the early 20th century, while stock market was being introduced and many people became suddenly rich by it. They were worshipping money and status, but neglecting humanity (you can read more of my analysis of the theme in my WEM posts). And Wharton crafted them in a beautifully-flowing prose.

Five stars for The House of Mirth! And I would certainly read Mrs. Wharton’s other novels.

Posted by Fanda Classiclit at 7:31 AM