The Life and Times of Émile Zola by F.W.J. Hemmings 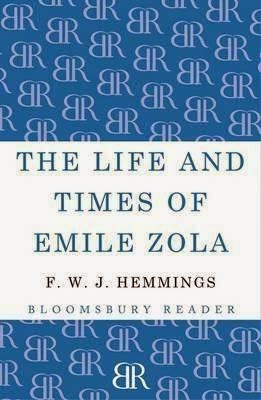 Shame on me, really, for after three years having been Émile Zola’s hardcore fan, I have never read any of his biographies! So in Zoladdiction 2015 I would not read any Zola’s novels (only Germinal rereading), to make room for his biography by F.W.J. Hemmings.

Hemmings covered his investigation from the beginning of 19th century. Zola’s mother was a humble-birth young girl of a glazier family, who could not have afforded her dowry if a forty four year old Francesco Zola—a son of a distinguished military family of Republic of Venice—has never been attracted to her. Zola’s father was a genius in constructive business, but never succeeded until his death when Zola was only seven years old. After paying off the debts, the Zolas must leave Aix-en-Provence to live very humbly in Paris with the aids of some friends. It was perhaps his memory of Aix’ country landscape which inspired Zola to write beautiful narration about nature in his novels.

Émile Zola arrived in Paris in 1851, the era when Baron Haussmann was renovating Paris into modern industrial city. If you are reading (or have read) Zola’s The Rougon Macquart series, this theme would not be unfamiliar to you. The world was changing, and so was Paris. Zola’s interest, besides in literature, laid in art, especially paintings. It was the era when young Impressionists strove to reform the old Romantic style, and to get their paintings recognized and exhibited in The Académie des Beaux-Arts. Zola fought for them through his journals, and by hosting meetings in his place, just as Pierre Sandoz did in The Masterpiece. And indeed, most of his novels were inspired by real facts or things he witnessed from his life; including some of his female characters.

Through this book you will get to know the real Émile Zola, with all his struggles in life and in writing. Yes, in writing. Reading his books, you will notice that he was not a writer who would sit on his desk and pour out his imagination on paper just like that. No, he would think of the theme first, then creating the structure, breaking it down into parts or even chapters, studying (from books or observing) the objects he would write about, and finally filling it with his narration. He was not an impulsive person; but rather a genius who would calculate everything beforehand to ensure that he would come up with the desired result. That is Zola.

I think in a way Zola and I have something in common; we both don’t belong to the majority, and often felt lonely because we were different, for it’s hard to find friends who share our ideas. Once we have an opinion (and we always know we are right), we don’t like to deny it just because our lot don’t approve of it. What I admire in him mostly is his brave act of attacking the wrong accusation of Alfred Dreyfus. And he did it not for fame or image building, but because he always fight for the truth; dared to take risk for something he believed was right.

In short, this will tell you the real personalities of a Zola, and it helps a lot to relate with his novels when we are reading it.

Four stars for The Life and Times of Émile Zola

3rd book for Lucky No. 15 Reading Challenge (Something New)

Posted by Fanda Classiclit at 9:32 AM