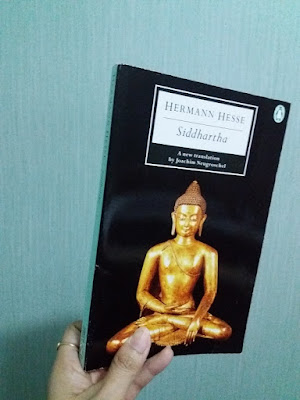 I have thought that Siddharta was about THE Siddharta Gautama—the Buddha—and that this book is all about Buddhist thing. But after finishing it, I just realized that Herman Hesse did not focus on a certain religion, but in the universal search of our Creator.

Siddharta was not the Buddha. He was a Brahmin son who was thirst of finding the “ultimate reality”. He is a brilliant young man, and when great teaching didn’t quench his thirst, Siddharta shook off his monk robe and took on every worldly habit he got on his way: sex, gambling, business—in short becoming “the child people” as he used to call ordinary people. He enjoyed these habits at first, and believed that only in becoming acquainted with worldly issues, that he would find peace. Instead of peace, he felt terrible emptiness in the end that he felt like jumping in a ditch. And then, while he was at the lowest bottom, his conscience led him to follow the spiritually inspirational river, and becoming a ferryman. Only then and there that Siddharta finally found the ultimate peace.

This little book has so much wisdom to contemplate on. I found it very soothing and calming. One day I brought the book to the apartment’s garden near the pool. There I have a favorite spot near one of the tower’s door to the pool; it is shaded in the afternoon, and quite secluded from the pool. Only people from that tower would occasionally pass there, but usually they just pass by and ignore me (maybe for them I am just a strange girl who choose to read a book in the hot afternoon, while everybody else is swimming!) Anyway, there I was on one hot afternoon, reading the last chapters where Siddharta loves to “listen” to the river’s voice; and I thought how lucky anyone who can lead a peaceful life like that! And I believe, after this, I would never listen to gurgling sounds on the lake or river without remembering Siddharta!

Siddharta’s long journey to find ultimate peace is so relatable to our modern life. Many people have been trying hard to seek God—sometimes by comparing one religion to another—but few really find the Ultimate Truth, and some have never even found it. And many more are still disputing over which religion is better and higher than the other. While the answer is very simple—Herman Hesse has shared it with us all these years through Siddharta.

The most interesting part of this book for me is how Siddharta listen to the voice of the river. I didn’t understand what it means at first, but I think the key here is the serenity. Being in the tranquil river means you can clear out your cluttered mind and soul, and only then that you can really listen to your conscience. The medium can be different for each person—for Siddharta it is the river, but for me, it is the rustling of leaves or the chirping of birds. It is not that Siddharta really sees a person’s face or an event reflecting from the water, but with his mind clear, he can see what is really in the depth of his conscience. So the voice of the river is really the voice of God.

I am very grateful that I have ever read this book—so inspiring, so soothing.