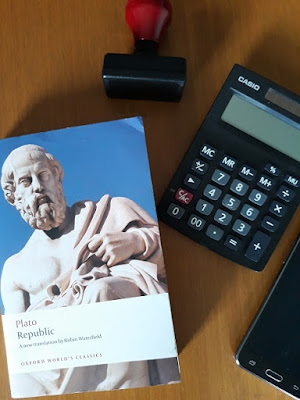 I must take a mental note not to read any philosophical book during three of the last months of year! When reports and deadlines occupied most of my brain, I should have chosen some lighter books than Plato! Really… I almost put Republic down in the middle of 200s pages, but I know that if I didn’t finish now, I won’t probably pick it up again in the future. So, I kept on reading. And you know…it turned out to be rewarding in the end!

Republic is a conversation of some Ancient Greek men who were “on the threshold of old age”—one of them was Socrates. From common earthly matters, their conversation moved to a serious one: Does morality rewarding? Socrates thought so, but others disagreed. One of them said that “morality is nothing other than the advantage of the stronger party…” And that led to a discussion about governmental systems—the best and the worst types, as well as the same weighing at human’s characters. They even created from the scratch an ideal community in which happiness is in store for everyone—from the leaders (they call it “guardian”) to its citizen.

So, Republic is not a political book in the first place. First Socrates analyzed positive and negative points from several biggest governmental systems; then cross-referenced them with men’s character types. In the end, they all agreed that morality is, after all, rewarding. And actually, being the title of this book doesn’t mean that Republic is the best political system chosen by Plato. Here is the nomination according to Plato, and agreed by the rest (from best to worst):

Like I said, I have chosen the wrong time to read Republic, so I didn’t have chance to make thorough analysis on the state models, and cannot decide which model is the most ideal.

The idea of one-person-one-occupation is good. That way everyone can work according to his passion and skill; that way he will produce his best, and in the end everyone will be satisfied. I also agree that the ruler (or guardian, using Plato’s term) must be provided with special education, on philosophy, in particular. But I strongly opposed to Plato’s way of exalting the guardian class, to the extent of restraining them from marrying other social classes, and even suggesting that children will be snatched from their parents and raised by the state. I agree that ruler of the state must have certain qualities, but that the kingship should be dominated by certain class… a big no!

To sum up, there are things in this book that are indeed relevant with our issues today; the idea about morality and philosophy really benefit us—and thus make Republic an important reading. But there are also other ideas that was really disgusting.

Posted by Fanda Classiclit at 3:10 PM
Email ThisBlogThis!Share to TwitterShare to FacebookShare to Pinterest
Labels: BC, Philosophy, Plato, Republic