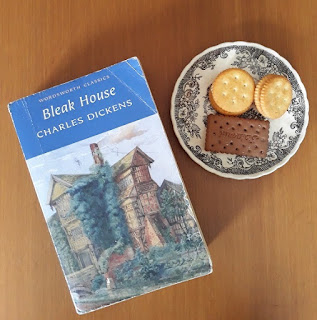 Jarndyce and Jarndyce was a legal case with a long history in the Chancery court. It's about a conflicting wills which affected many people of several generations and ruined many of its suitors’ lives because of the corrupted law system. Of the many victims are John Jarndyce, the owner of Bleak House, the two orphaned cousins Richard Carstone and Ada Clare, and Lady Honoria Dedlock. Together with another orphan girl which became John Jarndyce's ward: Esther Summerson, they become the leading characters of this book.

Dickens wove the story using voices of two narrators with different character: Esther Summerson's—calm and reserved, and the omniscient—rather cold and severe. This makes Bleak House less dull, but still I missed Dickens' warm and affectionate voice he used in several books I have read so far.

Unlike his other books, Bleak House was built by several plots or subplots which are often unrelated to each other, but for the (abundant) characters. The Jellybys and the Turveydrops, for example, are not really related to the others, except Caddy Jellyby who are so fond of Esther Summerson. Is it only Dickens's way to highlight Esther's amiable and unselfish character? But what about the Dedlocks? Lady Dedlock is another prominent character here, but although she was also suitor in the Jarndyce vs Jarndyce, her part is not related to the law suit; which made me thinking what purpose does she really bring to us, reader?

Speaking of Lady Dedlock, she has become my favorite character of this book. From the moment she went to the burial ground, disguised, guided by poor Jo, I have said to myself: here is a brave, strong, smart woman with a steely determination underneath her elegant bearing. Compared to Esther Summerson or John Jarndyce, Lady Dedlock seems more humane, and thus more prominent. For a distinguished lady who had a dark past, how she could bear it bravely alone… that’s the real heroine to me. Esther and, especially, John Jarndyce are almost like fairytale’s character. Can one be THAT unselfish and always perfectly kind like Jarndyce? I would have loved him to be selfish, at least when his love was concerned, but for his lover’s happiness, he’d reluctantly give way to the man she really loves. That would be much acceptable. But, it’s Dickens anyway, and despite all that, Bleak House was loveable and memorable.

Oh, I forgot to mention Harold Skimpole, who, to me, was the WORST antagonist of all time! How can that kind of person ever exists in the world, I can’t imagine. Well, enough for the rants... I would have given Bleak House five stars just for Lady Dedlock’s sub-plot. The search by Inspector Bucket and Esther is so thrilling. And I could see whence Hercule Poirot’s investigating style was inspired—his casual talking to extract facts innocently, his systematic pattern of search (and his cool way to do it), and the way he confront the accused by shaking his/her emotion in front of others. Now, that part deserves five stars, but Esther’s narrative and the Jarndyce and Jarndyce are rather dull and unreal. 4,5 of 5 is my best compromise.