The Warden by Anthony Trollope 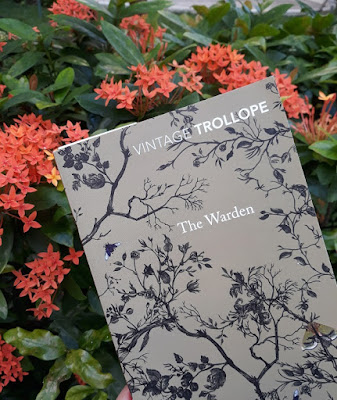 The Warden is the first of six novels in Trollope's Chronicles of Barsetshire series. Mr. Septimus Harding is the warden of Hiram's hospital, founded by a John Hiram four centuries ago. In his will, Mr. Hiram left his estate to the Church, intending it to be an almshouse providing decent life for twelve bedesmen. After four centuries, the estate's income has much increased, and so, besides for the bedesmen, it also provides a comfortable life for its warden. At this point everyone (bedesmen and warden) has been living peacefully, and happily have they been accepting the arrangement. The warden, Mr. Harding, even generously sets aside a small portion of his personal income to provide additional gift for the bedesmen.

Then, a zealous young man, John Bold, who call himself a reformer, put it into his mind to propose a reformation to the arrangement. He thinks that the surplus money, instead of being paid to the warden, ought to be given to the bedesmen. Bold chose journalistic path to fight his cause, and soon enough, the newspapers started attacking the meek Mr. Harding's character, drawing an image that he is a greedy and selfish robber. On the other hand, the old bedesmen were also swept by the conflict, as they began to cherish hopes of getting rich. It is they who are eventually getting greedy and selfish.

I always have suspicion on anyone calls himself a reformer, as if it's a profession. Instead of reforming that which really needs to be changed, the person always finds some causes which he could reform, under pretenses of serving public interests; while in fact it's only his own ambition that he serves. That is, I think, the case with John Bold. Does he really think the bedesmen suffer from any injustice? I think he focuses only on the lawful aspects of the inheritance. But charity is charity. When the poor is provided with decent life and is happy, that is the aim of charity. Why must anyone make a fuss on the will, while it was probably what the late Mr. Hiram has exactly wished? If in the end everybody is unhappy; is it truly a public service?

The Warden is the first novel of Trollope I've ever read. Last year I read one or two of his Christmas short stories, and was captivated by his wittiness, and his sharp, straight away style of storytelling. But I must confess that The Warden has quite bored me. Some said it gets better with his next novels, so let's just see. Also, I'm not amused by his parodying Charles Dickens as Mr. Popular Sentiment and Thomas Carlyle as Dr. Pessimist Anticant. I realize that writers criticize one another of their contemporary all the time, but I think Trollope's parody is rather too harsh.

Judging all that, I think 3/5 is not unfair for this book. I do hope the next one really gets better!

Posted by Fanda Classiclit at 7:30 AM
Email ThisBlogThis!Share to TwitterShare to FacebookShare to Pinterest
Labels: 19th Century, Anthony Trollope, England, The Warden