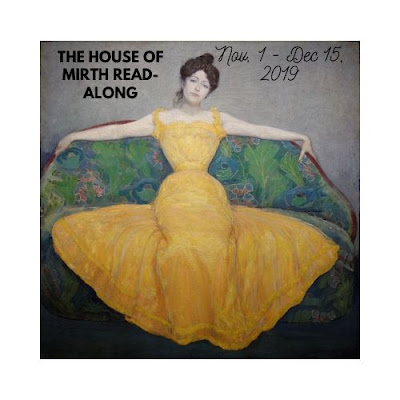 Sundays at Bellomont means going to church. Like in many other societies, attending the church gives them sense of honor. No matter what they do on the other six days, going to Church on Sundays seemed to neutralize everything, and they got out of it clean and pure again, to go back to your corrupted life the next day. What a hypocrite!

Anyway, the last touch of Lily's conquest of Peter Gryce would have been for her to put on her grey dress, bring a prayer book, and go to the church with him. She certainly knew it, as she have known how to "woe" the shy Mr. Gryce on the train. But instead, she played truant and went for walk with Selden. Is it really Lily's strategy to whet Gryce's appetite - as Selden's suspicion (and Lily's defense to her own conscience)? I don't believe it. I think, Selden has shed new light on her view towards her circle of society. She could see now how freeing the outer side of it was. Her procrastination is not of laziness, but because she dreaded the dull and monotonous life she would lead on marrying Gryce (or anyone from her set). She delayed because she wanted to know more about her alternative - which she hitherto only saw vaguely; she was still weighing the choices. Unfortunately, she miscalculated the Bertha Dorset factor. Lily's wide knowledge on human psychology, apparently, didn't touch much on that of her own sex.

The most important chapter of the book - the center of the story, where Wharton poured her personal view towards the corrupted society.

Selden's attraction to Lily started with amusement. Selden the spectator perhaps admired her subtle skill to climb the society stairs, and - you got to admit it - it was almost heroic, her continual struggle to get out of poverty!

Lily's attraction to Selden was because of his detachment from her circle. She admired his freedom and easy going manner, while she must calculate every step through the slippery stairs as she belonged to the circle he despised. But their leisure walk changed everything. It was the turning point for both, but most of all for Lily.

Now Selden realized that Lily was not thoroughly shallow like her friends, and not that haughty as he thought she was. Also after he detected her "weakness", he was flattered to be "the unforeseen element in (her) career so accurately planned".

On the other hand, Lily viewed Selden as the representation of freedom; and because he was "as far removed as possible from any assertion of personal advantage" and "being able to convey as distinct a sense of superiority as the richest man she had ever met." Shortly, they attracted to each other because Selden and Lily were both different from the others.

The priceless philosophy from Wharton: the republic of the spirit. Through Selden, Wharton criticized how society saw money as the highest achievement of life, and a means to buy freedom (it is merely illusion, because rich people eventually became the slave of their money). She wanted to remind us that the real freedom is when you personally feel free to lead whichever life or role you want to lead, whether you were rich or not, and no one can dictate you, or impose on you rules to obey. She wanted to emphasize that money only brings corruption; especially when "so much human nature is used up in the process". That was the core of this story; that was what The House of Mirth is about.

=Who was the real coward?

The character of Selden-Lily's relationship could be concluded in this passage - beautifully crafted by Wharton:

'Why do you do this to me?' she cried. 'Why do you make the things I have chosen seem hateful to me, if you have nothing to give me instead?'

'No, I have nothing to give you instead', he said, sitting up a d turning so that he faced her. 'If I had, it should be yours, you know.'

She received this abrupt declaration in a way even stranger than the manner of its making: she dropped her face on her hands and he saw that for a moment she wept.

People always discuss on who is the real coward, Selden or Lily, as they called that to each other in this chapter. Well, for years I have been switching opinion from Lily to Selden. But this time I can give my definite answer, that neither of them is a coward.

Selden couldn't marry Lily, unless he succeeded to convert her to his "republican of the spirit", otherwise he couldn't afford her. On the other hand, Lily, though despised her society, could not bring herself to denounce her "natural habitat". It is in accordance with the theory of determinism of 18-19th century, which was based on the idea of heredity and environmental influence on human's behavior. So, in this theory, Lily was not a coward - she's a victim of the corrupted society.

I have actually read through Ch. 7, but just didn't have time to put my thoughts into this post. Until next week, then.. ;)

Posted by Fanda Classiclit at 8:17 AM