The Deerslayer by James Fenimore Cooper 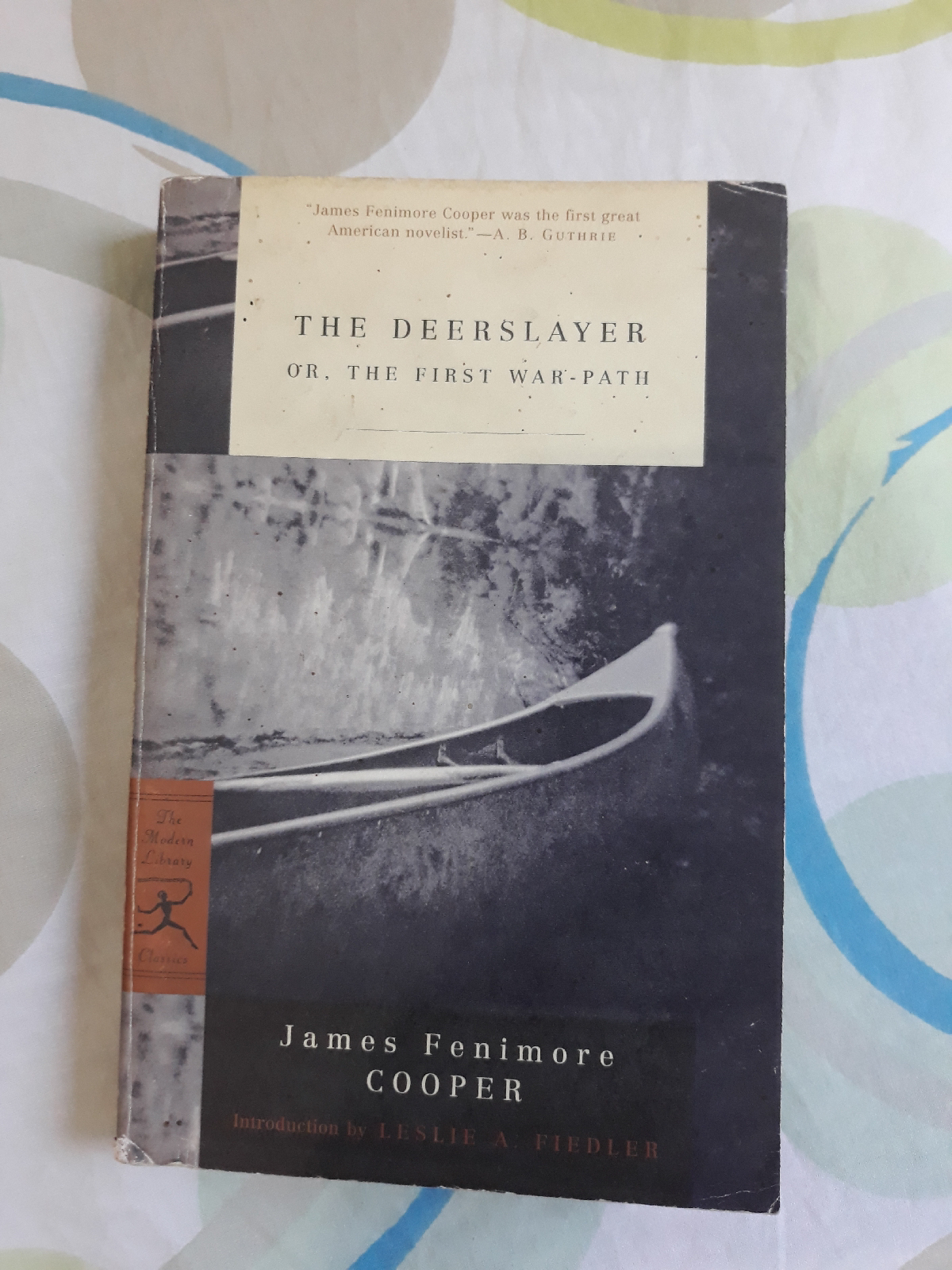 The Deerslayer is the first book of Cooper's Leatherstocking Tale series, although it was the last he had written. The Leatherstocking chronicles an American frontiersman called Nathaniel "Natty" Bumppo in the 18th century. Leatherstocking, if you weren't familiar with the word, means a man who develops survival skill in order to live in the wild, away from civilization. My first acquaintance with Natty is from The Last of the Mohicans, which I loved. Now I intend to read through all the "tale in five acts" as Cooper had called his masterpiece.

Natty "Deerslayer" Bumppo is on his journey to a rendezvous with a Delaware young chief: Chingachgook, who has become like a brother to him. The rendezvous spot is within the Ostego Lake, and the mission is to save Chingachgook's betrothed Wah-ta-Wah (Hist), who was kidnapped by the Hurons tribe. On the way to the Ostego Lake, Natty bumped into Henry "Hurry Harry" March, another frontiersman - a tall, handsome, ruthless young man. Harry himself is on the way to visit his longtime friend, Thomas "Floating Tom" Hutter, an ex pirate who has built a log "castle" in the center of the lake to house his two daughters: the "feeble minded" Hetty Hutter and Judith Hutter. The latter is actually Harry's main object, as he's keen to marry this girl with exceptional beauty.

Thus Natty and Harry journeyed together. Along which we soon learned that Natty is of a truthful and dignified Christian nature, while Harry is rough, arrogant, and selfish human being, who believes that the "Injins" are just one level higher than animals, whose scalps he'd be happy to take for money. Natty, on the contrary, is against taking scalps.

On arriving at the Hutters' Ark - a sturdy construction Hutter has built to float on the lake during wars (thus keep the family safe from bullets or tomahawks range) - the Hurons attacked them. Enraged by this incident, Hutter and Harry decided to take a canoe to the Hurons encampment to take scalps, but they were captured instead. Chingachgook soon joined Deerslayer and the girls inside the Ark, and they found way to ransom Hutter and Harry.

This mission accomplished, Deerslayer then kept his promise to help Chingachgook to free Hist. However, in the process, Deerslayer was caught by the Hurons, who're enraged because he has killed two of their best warriors, who have actually wanted to kill him in the first place. At the same time, the Hurons attacked the Castle for the second time when Hutter and Harry were alone, after their recent freedom. Harry was saved by the others in the Ark, but Hutter was scalped (alive!) by one of the Hurons. It was the most horrifying scene throughout the book, though it came as sort of karma for his ruthlessness! He's dead, of course, soon after, but not before telling his daughters that he is not their biological father.

After being orphaned, Judith is thinking about becoming Deerslayer's wife, as it would be impossible for the girls to live alone in the wilderness. Hitherto she is famous of being coquettish, too liberal with young men; she went to the soldiers' place too often to give her bad reputation. But after knowing Deerslayer, she gradually transformed into a different person. The question that remains, after they were saved from the Hurons, is whether Deerslayer would accept Judith's proposal, and what happen to her next.

The Deerslayer is not just about life and adventures in the wilderness. It talks a lot about death and after life; about God and religions, viewed from both the whites and the Indians. From these different views, I concluded that Cooper wanted to convey that, embracing the diversity is what God teaches us. It's impossible to own one's Chistianity while at the same time regards other religions and/races as one's inferiors. That to leave peacefully is to respect others who is different from us - their cultures, their believes, their ways of thinking. How beautiful is a friendship between two human beings, born totally different from each other, but can embrace their differences to create a perfect harmony based on equality, such as Deerslayer's and Chingachgook's.

Other theme which interested me is how society (in the voice of Cooper) treated women. I'm so disappointed on Cooper's decision on Judith Hutter's fate in the end of the novel. Yes, she is cocquetish and much into herself in the beginning of the novel (from Hurry March and Natty's conversation). But after that she reveals more and more qualities of a good woman: intelligence, bravery, independence, humility, and unselfishness. While Copper talked much about morality and Christianity in this book, couldn't he "forgive" Judith from her past follies and give her redemption? Why did Hurry Harry "escaped" from the scene unharmed (while his sins are greater than Judith's)? So, a man can kill others recklessly, and he's only been rebuked, but when a woman gets bad reputation (though it might just be rumors by the men), she is damned with nothing to have saved her. Hawthorne is, at least, more lenient to Hester Prynne in The Scarlett Letter, by giving her a second chance (though far from ideal). I don't know whether this "damnation" is really Cooper's view of women's role in society, or it is in accordance with his criticism of moral corruption of most of the settlers/frontiersmen. Hopefully it is of the latter; what do you think?

Posted by Fanda Classiclit at 5:18 AM