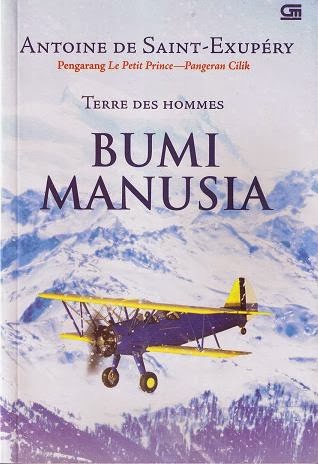 Finally….the second five-stars reading of this year—thanks to Monsieur Saint Exupéry! Terre des Hommes is also known as Wind, Sand, and Stars (English translation), although I think the exact translation should have been ‘the earth or the land of mankind’. ‘Wind, sand, and stars’ makes it looks like a childish nature-philosophy book—almost like The Little Prince—but in fact Terre des Hommes is much more than that. This is a book which brings us back to our nature as human being. Living the routines makes us forget the true value of life itself. We tend to continue living because… well, because we are alive. But do you ever ponder, why are you living? For what purpose do we struggle to survive—apart from our instinct? Or, if you want to go deeper, why do we have the instinct to survive? We are going to die, sooner or later, aren’t we?

Terre des Hommes is Exupéry’s autobiographical book, or memoir is more suitable. In this book he tells us his experiences as a pioneer pilot for French airmail company: Aéropostale. In the days when aviator technology was far less sophisticated, and much more dangerous, only men with exceptional courage would have liked to flight an airplane, let alone the airmail carriers, because the risk was very high. Not only that the routes have not thoroughly mapped—it was often these pilots who did the first mapping—but the danger of being stranded on the Sahara; the risk of dying from thirsty, or of attack from the dessert rioters, were always facing them. But instead, Exupéry found an inspiring joy in his job.

It is in the tranquil solitary of the universe did he found the overwhelming peace whenever he was flying the airplane. The limited means of technology forced him to keep an intimate relationship with the sky, sun, moon, stars, sea, clouds, wind, and storm. But his real lesson came when his plane crashed on the Sahara, where Exupéry and his mechanic-navigator Prévot were stranded with almost no food and drink to survive. They were nearly died of thirst and had several mental delusions, before finally found and saved by a Bedouin. His near-death experience taught Exupéry of what must be the most important thing of being alive.

God created man as His image and bestowed him Life. Now, it is our duty to keep it sacred, because we live not for and by ourselves; we—the creation—are part of the universe. And so, our lives are valuable and meaningful. It is our duty to pass on our humanity to next generations. When Exupéry was nearly dying of thirst, it might have been much comforter for him to lie down and embrace death. But instead, he kept struggling and pushed his limit, because that is what a human being should be. And although someday our existence would be vanished from the earth, the legacy of our humanity will still exist through our descendants; through the spirit and the value we have inspired them.

I think I could never give enough credit to Exupéry and this book through this review alone. If you only knew how many dog-ears this book must bear, because almost in every pages I found treasures hidden beneath the beautiful poetic prose Monsieur Exupéry has woven into this memoir. I am more blessed because Forum Jakarta-Paris through French Embassy in Indonesia has decided to translate this book directly from the original French edition! Thanks for bringing this magnificent piece to our reading atmosphere; what an inspiring experience to read it!