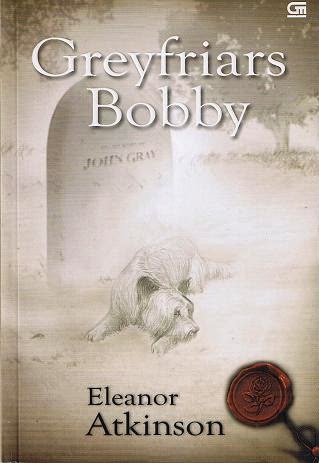 Reading the synopsis and looking at this book’s cover (and later on browsing the true story on the internet) are enough to assume that Greyfriars Bobby would be a sad and gloomy book. I have delayed reading it for few years, but when I finally got through it, Greyfriars Bobby turned out to be very enjoyable. There were quite plenty of tears throughout the book; but there were also much cheerful times with Bobby, the brave and loyal Skye terrier dog.

Bobby belonged to a farmer who had a sweet little daughter in Edinburgh, Scotland. However, the only human to whom Bobby ever gave his love was Auld Jock, the poor old shepherd who worked for the farmer. A tight bond tied them both, and nobody could enter their intimate relationship till the end. Auld Jock was a simple and kind man; he did not talk much. Maybe that’s what bound them together; they had each other and loved each other exclusively. Then Auld Jock got pneumonia and died. Although he was poor, he had saved his small salary to get a descent funeral; he was buried at Greyfriars church graveyard.

Since then, Bobby’s home was on his master’s grave. There he lay at night, and never left Auld Jock’s grave unguarded, for whatever reason. He only went to an eatery every day to get his meal—thanks to the kind-hearted eatery’s owner: Mr. Traill. The church gardener and graveyard keeper, Mr. Brown, chased Bobby many times away from the grave, but he (Bobby) always managed to get a way to come back. Until Mr. Brown finally gave up, and even came to love Bobby at the end. Poor children around the church were also Bobby’s fanatic lovers. It’s interesting to learn how a little dog could pour so much love upon the wretched children, that they could grow up as loving adults. When the City Council wanted to eradicate stray dogs from the city, these children collected money (seven shillings) from their group and some poor people who loved Bobby, to save him. It was so sweet to read how these poor people sacrificed their small money for a little dog. It was proof of the power of love which can make difference.

Lucky for Bobby, the Lord Provost who was an animal lover—moved by the children’s donation for Bobby—paid Bobby’s license and made him a special collar. And so, Bobby could spend his old days peacefully at the churchyard, guarding his master’s grave ‘till he finally could be united with his master in heaven, fourteen years after his master’s death.

It appalled me to read about the fanatic faith of a dog towards his master—for fourteen years! Nothing could change Bobby’s mind from returning to the grave at night. One day he was distracted by a military parade to a nearby castle which was located on a steep hill. Just as the night signal was heard, Bobby frantically searched for a way out. It was a foggy night, and no living creature could possibly get through down the hill. Well…except Bobby! He groped his way blindly in the dark, he even bruised himself while descending the hill. But he didn’t care, even, perhaps, if he should have died; he would do everything to be on his master’s grave again. That was the only home he knew.

Little Bobby is not just a touching story of a very brave, loving, and faithful dog, but he taught us about the real love. Sometimes it does not need to be expressed in words or cuddles, but only to be felt deep in one’s heart. It is about taking and giving what little each has; it is about living together what life offers them. More than that, Bobby taught me about faithfulness and persistency; something that we, humans, lack of.

I must thank my blogger friend, Alvina, who gave me this book—I think nearly two years ago (or three??). I am a bit sorry to have delayed in reading it, but I am awfully grateful at the same time for finding this treasure at last. Four stars to Greyfriars Bobby!