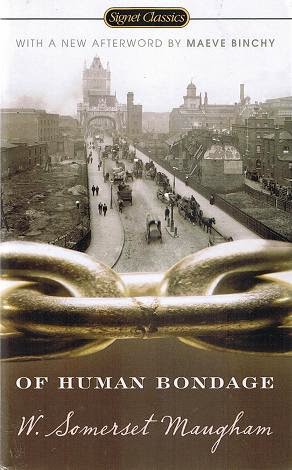 Approaching the end of year 2014, I think I have found a new masterpiece: Maugham’s Of Human Bondage! It was based on Maugham’s real life, and therefore it was very vividly portrayed. Following the fate of the protagonist Philip Carrey; I felt like having been knowing a real intimate friend from his childhood, and been growing with him. Maybe it’s because Philip is Maugham himself, that he could pour out all his detailed emotion into the narration. Of Human Bondage has been one of my most incredible reading experiences throughout the year.

Philip was a nine year orphan boy with a clubfoot, and an only child. He was taken care of by his uncle, a vicar in a small village. He was brought up to enter a religious profession, but his deformity has made him a shy and inferior boy, and he got much trouble in his social life. Between the rigid expectation of his uncle and his tortured feeling for the world which (he felt) did not accept him, his Catholic faith cooled away.

With a great appetite for beauty, knowledge, and adventure, Phillip spent his youth in German as a clerk—which he found too boring; then in Paris to study art-painting—but later found out he was not talented; and finally entered medical school to be a Doctor like his father. However, during his study, he was entangled in a difficult relationship with a girl named Mildred. It was a painful kind of love; and Philip let himself to be enslaved by his passion; and as a result, ignoring his study and draining his savings. Luckily he met a humble and warm family, the Athelnys, who poured their love and affection to him. It was just another proof that love and positive energy are the only way to help human from destruction.

I have a deep sympathy for Philip. Deep inside, he is tender-hearted; he can easily be moved when others show him little affection. A man like Philip needs to be understood and accepted. And that is what he lacked of. His deformity banished him from society and he became extremely sensitive and egoist. Maugham portrayed Philip’s struggle so vividly and detailed. It must have been an interesting subject if you study psychology or have interest in human character. As a bildungsroman, of course young Philip is far from perfect; on the contrary, you would want to scold him every now and then for his various mistakes. You would often want to shout at him: “Don’t be stupid, Phil!” At times he would act normally, but next time he would stumble all over again to a trouble, then you would be like: “Oow…not again!?”

Overall, Of Human Bondage is a man’s search for the value in life. When Philip was young, he judged everything by its beauty and perfection. However, life taught him much better than any art school, about the real value of life. His poverty scrapped his pride; and made him an affectionate doctor who was loved by his poor patients. I also believe, that without his folly and wretched experience with Mildred, he would have always been the irritating and cynical person he used to be. For some of us, love and kindness are our genuine personalities; but for others, who have been in more difficult circumstances, hard times and sorrows are needed to polish one’s hardness to milder heart. Philip Carey belongs to this.

Of Human Bondage is a sweet story of one human’s strives to be freed from what he thought of as bondage: other people’s rejection, religion, poverty, personal handicaps; all the wretchedness of life. We, human, always want to be free, before we really realize what that means. Maugham (through Philip) opened our eyes of what the real value of life: love and family, kindness and friendship.

This book has given me a very satisfying reading experience. Together with Philip I have been through most of human emotions. No wonder that it becomes Maugham’s masterpiece. I can feel that he has poured out his emotion totally into this story, and I admired him very much for that. Five stars for Of Human Bondage, and Mr. Maugham.

Posted by Fanda Classiclit at 7:24 AM