What a tough book to begin the new year with! I read The Confessions for WEM project, and this is my first chapter post of it. It tells Augustine’s early life, his dwelling in sins, and how he converted to Catholic.

St. Augustine plumbed into his memory to trace how God has poured His grace onto him since infancy, yet he has sinned since he was born. Later, his baptism was deferred due to illness, and it exposed him to focus his mind in rhetoric studies, instead of God's Truth.

In his puberty, Augustine committed adultery and theft, and was pleased in doing them for the sake of sinning and powerful feeling. His parents could have hindered him from it by arranging marriage, but they thought study was most important. Augustine believed God kept silent about his sins, although later realized that his mother's warnings were actually His.

Augustine studied at Carthage and was amused by Greek plays, Cicero's philosophy, and Manichean heresy. Meanwhile he kept searching for God, yet he blasphemed Him and "stayed in the mud" for nine years. His mother had a vision that he would repent someday, which raised her hope.

After completing his study, Augustine taught the art of rhetoric at his native place Tagaste; where he took a mistress, and was drawn on astrology; until he was deeply grieved upon his best friend's death. He then returned to Carthage; praising and writing a book on the nature of beauty; and was attracted to Aristotle's The Ten Categories. He was amused by his own ability in learning and studies, not realizing that God granted it him to serve Him.

At age 29 Augustine met a Manichean bishop: Faustus, at first was amazed at his eloquent speeches, but soon disappointed as it could not quench his thirst for the Truth. He was persuaded to pursue teaching career at Rome, where he got a fever and almost dead, before recovered and found new interest in Platonic 'Academia'. Then he won an audition to teach rhetoric in Italia for Ambrose (a bishop), where he was attracted to New Testament; and finally became a catechumen in the Catholic Church.

Though he was closed to Ambrose, he could not disclose his troubled soul to him, and so kept on believing that God exists, though he couldn’t trust anything that was immaterialized. Instead he sought eagerly pride and pleasure, together with his friends Alypius and Nebridius. He was engaged with a girl who was 2 years too young to be married; and meanwhile lost his mistress, wounded at heart, then took another mistress, and so plunged deeper in sins.

Augustine still could not accept the concept about God who was not materialized and the existence of evil, if He is good. Then he learned some quotations from Scripture from Platonist books and finally found the Truth; that all comes from God is good, and evil is the bent will of men from God. He even experienced Plotinian ecstasy, and from there began to know Jesus Christ through study of Paul the Apostle.

Book 8
Though he has believed in Jesus Christ, Augustine was still reluctant to leave his worldly passions, especially sexual desires. He was inspired by the conversion of Victorinus and Anthony, but still in severe conflict between the good and evil in his soul; until God finally guided him to a certain passage in the Bible. It was that that finally fully converted him to Catholic faith, along with his friend Alypius.

Book 9 is the last part of St. Augustine’s autobiography. He tells us how he resigned from his rhetoric job; having finally been baptized along with Alypius; then leaving for Africa together with his mother Monica. There in Ostia, together with his mother, Augustine experienced an ecstasy while discussing about eternal life; just several days before Monica died of fever. He mourned over her death and dedicated a chapter to tell us the story of her life. 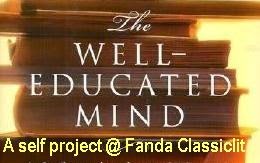 Posted by Fanda Classiclit at 11:00 AM
Email ThisBlogThis!Share to TwitterShare to FacebookShare to Pinterest
Labels: The Confessions, The Confessions WEM