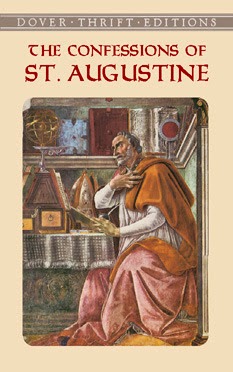 Actually I have meant to work this book out for my WEM project; I have even started with the summary (book 1 – 9). However, after finishing it, I just realized that The Confessions is more philosophical and theological than autobiographical. The last four books (book 10 to 13) were so engaging, I have even forgotten what I’ve been through in the earlier nine books. It seems like the four last books are the real core of The Confessions. Thus I decided to not continuing the usual three levels inquiries, and to write a (hopefully) decent review for this inspiring book, instead. Oh, I don’t even know how to begin the review, but I’m trying….

In the autobiography part, Augustine analyzed his former life; from infant to adolescence; how he has sinned; and how he struggled to find the ‘Truth’—you can read the chronology in my summary post. One of the most interesting things from this part is that Augustine believed that man has sinned even from his infant, when he is only one day old. Infant is demanding; it strives to get what it wants by crying. Augustine thought that baby’s weakness is in its body, not (yet) in mind. That is an extreme thinking, but it’s not fully nonsense either. Children are egoist; they only think of their own needs. Isn’t that the early stint of human selfishness? Isn’t human an individual creature? And aren’t we still inheriting Adam’s sins before we are baptized?

About baptism, Augustine also blamed his parents for not baptizing him as early as possible; for he believed baptism would at least help him fighting his ‘wickedness’ as teenager. I agree with this; although baptism doesn’t always keep someone from falling to sin as it depends also on his education and the society where he grows up. But early baptism, when followed by strict guidance in moral and faith, increases the chance to fight against the evil influence.

Augustine’s biggest weakness, besides his thirst of knowledge, was in sexual desire. For twelve or fourteen years (I forgot the exact number) he lived with a mistress whom he loved very much. In Italy, it occurred to him that a marriage would save him from this carnal lust. His mother, Monica, also rejoiced in his decision, as she has been continually praying for his repentance. But for the marriage, the woman he loved must be torn from his embrace. And this caused him a severe broken heart; although in the end Augustine never married any other woman, as he gave his soul wholly to God and His Church. I have actually just browsed a novel by Jostein Gaarder, Vita Brevis: A Letter to St. Augustine right after finishing The Confessions. Gaarder claimed that he had found an old manuscript which was believed to be originally written by Augustine’s mistress, a woman called Floria Aemilia. This would be an interesting reading, as she questioned Augustine’s theology and philosophy, and her views could be taken as an early feminism. But I would review it separately later….

Back to The Confessions, starting from book 10 Augustine slightly switched his writing from autobiography to philosophy and theology, although they were still read as his confession. Book 10 contains his motives of writing The Confessions and the path he has taken to finally admit that only through the mediator of Jesus Christ can men find and have unison with God, as men are so weak they could not do it by their own power. In book 11 Augustine was philosophizes a lot about mode and time of creation as is in the book of Genesis 1:1. He ponders a lot (and quite tediously) on time: past, present, and future. Book 12 is the best part of all, as here he interprets God’s creation of ‘heaven and earth’. He uses many allegories which enable the readers to follow his thoughts. He admits that men have interpreted God’s creation of the universe in many opinions, and no one can know the truth except God grant him it, but this is his idea (if I understood him correctly):

When a singer sings a song,

According to Augustine, heaven and earth in Gen 1:1—“In the beginning God created the heaven and the earth”—speaks about two different existences. One is spiritual—the heaven of the angels etc., the other corporeal—that is our earth (heaven here could perhaps be taken as sky). So, the creation according to Augustine could be perceived like this: God created the spiritual heaven and earth at the same time as, and in order that, He created the corporeal sky and earth. If only God’s creation could be explained as simple as that…. Still in book 12, Augustine also discussed about the meaning of other creations: water vs dry land, fish, fowls, the dark abyss and the light. He has completely changed my view towards those verses; I was grateful to have read this book as I was preparing that verses for my lector task on Easter vigil mass.

One post would not be enough to share all my thoughts, but I must stop here at last. One thing is sure: this is a very important and intense reading; tough but beautiful. One can read this many times, and would perhaps form different opinions on each reading. This book would also provide many materials for interesting debates.

The Confessions was written in 397 – 400 AD, and St. Augustine’s thoughts have provided great influence over the medieval era, when Roman Catholic Church was the center of institution. In all aspects in which he analyzed his former life, Augustine always viewed his actions and thoughts from God’s view; whether He approved this or that, and how he has offended God by doing some sins. In one chapter he would lament over his wickedness and ask God’s forgiveness, while in the next chapter he would praise Him and rejoice because God has helped him to repent. The relationship of God and human was still intimate; it was time when intellectual people pondered much over religion and God’s existence.

Five stars for this outstanding piece!

Posted by Fanda Classiclit at 10:33 AM