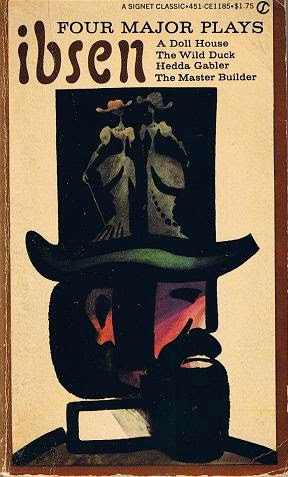 It’s been one and a half year since I met a play with a striking ending, which forced me to rewind what I’ve been reading in my head, and then…I saw it differently from my first read. That was my previous experience with The Cherry Orchard; and now the same thing happened again when I finished A Doll House.

All the scenes take place in the Helmers’ residence. Torvald Helmer is an ex lawyer who, after having struggled financially, is fortunate to have been promoted as the manager of a bank. Nora, his wife, is a woman with loose moral and indifference over practical things. Excited by his husband’s promotion, she starts squandering money buying expensive things, taking for granted their future big salary. Unknown to her husband, she borrowed money from a man named Krogstad, a scoundrel who work in the same bank where Torvald is going to be the manager, who is right now struggling to clear his reputation. He blackmails Nora to persuade Torvald to promote him, or he would unveil her forgery secret to her husband. It is slowly revealed that Nora is keeping much darker secret from her husband, than only borrowing and spending money.

A Doll House is a story of typical family in 19th century, when women were treated as household accessories, or in this play was symbolized as the husband’s doll, instead of an equal partner with the husband, where a wife should have been. After being treated like a doll by her father, Nora finds herself trapped in the same situation now with her husband. But Nora would have never realized anything wrong had not she been blackmailed by Krogstad, that her marriage is in the verge of destruction. Maybe Ibsen wanted to open the eyes of the society about this, although later he rejected the idea that this play was about feminism.

It is intriguing that this play’s title is originally translated to A Doll’s House. But some scholars call it simply A Doll House—an apostrophe that changes the context. The second version refers to Nora as a victim—which she is. She is never a wife; she is just the doll which Torvald keeps in the house, which he can play at his pleasure. So the ideal home of Helmers is actually a doll house. But with the apostrophe, it seems that Nora, the doll, is the owner of the house—which she is not. So maybe the simple version suits more what Ibsen wanted to say.

I have mixed feelings during and after reading this play. I’m so impatient with women like Nora—I can’t even decide whether she is simply naïve, stupid, or morally corrupted. Could it possible for a grown up woman to think she can do anything in the name of love, never feels guilty, and unless someone tells her, will never realize the risk? She is certainly not stupid, as she can act cunningly cleverly by forging her father’s signature to have the money in time. So, I believe it’s her moral. *spoiler alert* Her final action of leaving her family to “discover herself” only justifies my idea that Nora lacks of conscience; she only lives for herself. I can understand if she did it to prove to Torvald that she is not the beautiful doll he can keep and adore as accessories. But, again, she never thinks of the consequences, especially with her three children. How selfish it is to leave one’s children to improve oneself!*spoiler ends*

Although Nora should have been the protagonist here, I couldn’t help sympathizing with Torvald. I think he really loves Nora, and thinks spoiling her is the best way to show his feelings. Torvald is molded by the society, and he just acts like everybody else, without ever thinking that there is something wrong. Why, even his wife doesn’t think it wrong before the incident. So, I can imagine how shocked he is by Nora sudden decision.

Five stars for A Doll House; and I’d certainly read more from Ibsen.

Posted by Fanda Classiclit at 3:58 PM