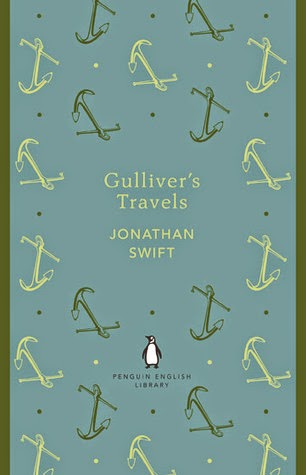 Okay, so I was wrong—Gulliver’s Travels turned out NOT ONLY about Liliput! And it is certainly not a children’s book, although the Liliput part is often adapted into children’s tales. It is written as a travel journal of a navy surgeon called Lemuel Gulliver. He joined several ships, but bad luck forced him to be stranded on strange lands. Liliput was only his first part of adventure, where he found himself in a land inhabited by a race of tiny people: Liliput. He finally could get home but not long after, involved in another sailing ship. He was abandoned by his companions, and soon found himself in the midst of a gigantic race of Brobdingnab. Gulliver’s next adventure was in a floating nation of Laputa, after his ship was being attacked by pirates. But the most inspiring journey, both for Gulliver and for his readers), might be that in the country of the Houyhnhnms—a race of talking horses.

As Gulliver has often mentioned throughout the book, his journal was not intended to amuse readers with fascinated adventures, but rather to introduce them of other civilizations so that we can learn to be a better race. I think Swift wrote it to satirize the political situation and humanity values at that time. The way Gulliver was stranded among, first, tiny people; then gigantic race, showed how superiority and inferiority stand among us—it’s not about who we are, but with whom we live. When Gulliver was in Liliput, he urinated on their castle on pretext of extinguishing the fire, without much remorse. But when he was in Brobdingnab, Gulliver became much more sensitive and was easily offended by (what the Brobdingnab people thought as) some trifles.

Gulliver’s changes of mood between adventures showed how we are strongly influenced by the society. When he was at Liliput, he boasted about his native country, England, and thought the Liliputians as unscrupulous. But when he was with the Houyhnhnms, he began to think of his fellows as disgusting. It also showed that humans are molded by habits; the longer you take it, the longer you can shake it. I didn’t take particular notes, but I think Gulliver’s stay in Houyhnhnms was longer than his others’, and so it was hard for him to get used to live in his old civilization.

Although Swift presented us a lot of fascinated adventures in strange lands, it is not easy to enjoy this book. Maybe because it was intended to be a journal, with flat and monotonous sentences, and with many statistics and scientific methods; which fittingly placed Gulliver’s Travels in Enlightenment lit category.