[Children Classic] The Famous Five: Five Go Off in a Caravan 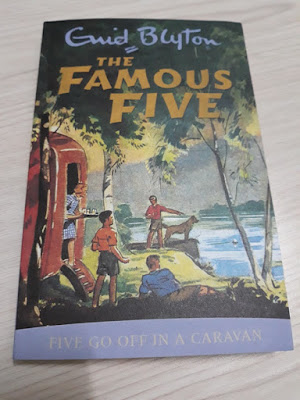 The Famous Five sets an important milestone on my bookish life. It literally marked my transition from child to teenager; and it was the first novel I read after years of reading (and being read--when I still couldn't read) picture books or comics. I still remember, being absorbed in the adventures of The Famous Five every holiday; feeling each of it became fun and exciting. My parents were not rich and could not afford going on holidays, so when my friends at school telling their exciting family holidays, I couldn't help silently thinking that MY holiday was far more exciting—if you only knew!

When Back to The Classics challenge set children classic as one of the categories, I knew I had to revisit my five famous childhood friends: Julian (the oldest and mature one), Dick (the kind and simple one), George (or Georgina--the tomboy and the rebellious one), and Anne (the youngest and innocent one). And last but certainly not the least—in presence as well as in importance—Timmy, the dog!

This time the famous five go off in caravans (the title is deceitful; they actually rent two caravans), intending to have a break from any kind of adventures. This time it will be for leisure only, going lazily to the lake in the summer heat. But adventure usually comes seeking them uninvited, not the other way round. This time they were attracted by a circus caravan, whose procession happened to pass by them. And when they decided to camp near it, the adventure has literarily begun.

They are fond of and befriend a circus boy: Nobby and his chimpanzee: Pongo. But his uncle is unsympathetic, though he is a clown. One night the uncle: Tiger Dan and Lou the acrobat went up the hill and bumped into the children's caravan. Without reason they asked the children to vacant the space and camp elsewhere. Of course the children refused since it was a perfect spot for camping. Then unpleasant things began to happen; the children wondered why the two men eagerly wanted them to move; what's wrong with this spot up the hill? Then one day Nobby's dog found a lump of meat near the children's caravan, ate it, instantly got poisoned, and nearly died! That was it! So it's not just about camping spot; Lou and Dan must have had a mischievous plan, and the children resolved to investigate it—here at last comes the adventure!

Rereading children classics is really comforting. And as I didn't have to care how the adventure will end, I could chew it slowly this time. And by that, I could capture many things I have missed on my first reading as a child, for example the personal character of the children. I just realised that the lovers for adventures are really Dick and George. Julian is more cautious and sensible. Dick is the kind of friend you would want to hangout with; he seems lazy at times, but very sharp when danger comes. And he's witty too. George is the one I dislike most. I don't like people who pretend to be what they are not. She is not only tomboy, but always pretends or wants people to treat her like a boy. She is also selfish and stubborn. The only thing I like from her is her dog: Timmy! Anne—well, there's nothing new about her. From the first I always see her as a sweet and responsible girl who loves to play mother to the boys (and half boy!).

This is the perfect book to be read in holidays, because in about two third of the book, the story felt cozy and relax. The adventure got tensed only on the last few chapters.

Posted by Fanda Classiclit at 7:53 AM

Email ThisBlogThis!Share to TwitterShare to FacebookShare to Pinterest
Labels: 20th Century, Adventure, Back to the Classics 2018, Children, England, Enyd Blyton, The Famous Five