The Tenant of Wildfell Hall by Anne Brönte 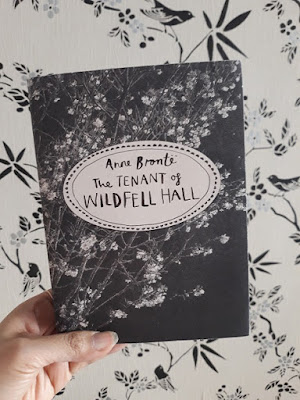 It's official now—Anne is by far the best Brönte! I have read Wuthering Heights (hated it), and Jane Eyre (quite liked it but not impressed), but with The Tenant of Wildfell Hall, I was hooked right from the beginning. Anne used letters and diary as her medium, which enabled her to show the characters' emotion more freely and naturally than if it's in flat narration.

The new tenant of Wildfell Hall mansion is a young widow called Helen Graham, with his little son Arthur. No one knows who she is, where she comes from, or who her husband was. This woman is very reserved—aloof even—and, unlike most women around the rural country, she does not like to socialize; hates gossips and scandals. Her seclusion only creates mystery, and this only gives the shallow society fresh fuel to gossips. Meanwhile, there is a Mr. Gilbert Markham, a gentleman farmer, who, similar to Mrs. Graham, can't endure shallow-minded and hypocrite people of his neighbors and friends. In short, bound by this similarity, he is soon smitten by Mrs. Graham, and she him. They share intellectual, meaningful talks, and similar interests.

But one day scandal is whispered about a gentleman, a Mr. Lawrence—Gilbert's friend and the owner of Wildfell Hall—who was suspected to be intimate with Helen. Gilbert even saw them intimately talking. Crushed and angry, Gilbert stayed away from Helen. However, Helen lent him her diary, letting Gilbert read and learn her real story. Apparently, the enigmatic Mrs. Graham is actually still married to a rouge gentleman, Arthur Huntingdon. He is a tyrant husband, an alcoholic scoundrel, who also cheated on her. Fearing that his bad influence would contaminate their son, Helen run away with the boy; helped by her brother--no other than Mr. Lawrence—who then installed her at Wildfell Hall. Not only clearing any suspicion about Helen's honour, these revelations also raised her already high qualities in Gilbert's eyes.

Between Gilbert's letters to an invisible friend and Helen's diary, Anne brought us readers through this lively, emotional, meaningful, and entertaining story. It's not easy to conclude the central theme of this novel. There is, of course, the love story of Gilbert and Helen, but, alas, how complicated it was! And yet, it is so much more than that. I was hooked by Gilbert-Helen's lively debate in chapter 3—in fact this was the point where I became certain that I would love this book. The debate was about the advantages or disadvantages for a child to be introduced to temptation from its early life in order to make him virtuous. I took pains to quote the dialogs here (though incomplete)—plenty as they are—because I just love them, and because it will actually construct part of the moral theme of this remarkable story!

Gilbert:
[By teaching the boy to detest wine] "But by such means, you will never render him virtuous.--What is it that constitutes virtue, Mrs. Graham? Is it the circumstance of being able and willing to resist temptation; or that of having no temptations to resist? ...If you would have your son to walk honourably through the world, you must not attempt to clear the stones from his path, but to teach him to walk firmly over them--not insist upon leading him by the hand, but let him learn to go alone."

Helen:
"I will lead him by the hand, Mr. Markham, till he has strength to go alone; and I will clear as many stones from his path as I can, and teach him to avoid the rest--.... [but] when I see the whole race of mankind (with a few rare exceptions) stumbling and blundering along the path of life, sinking into every pitfall, and breaking their shins over every impediment that lies in their way, shall I not use all the means in my power to insure for him a smoother and a safer passage?"

Gilbert:
"Yes, but the surest means will be to endeavour to fortify him against temptation, not to remove it out of his way."

Helen's opinion, you see, was based on her own experience (of which Gilbert would read on her diary later). Little Arthur, though already armed by his virtuous mother, was still contaminated by his father's evil influence. The only way to save him was by snatching him from his father's company—hence the runaway. So, in my opinion, Helen's opinion is the better.

But I am more interested in their later debate; the feminism aspect in Helen's argument.

Helen:
"But would you use the same argument with regard to a girl?"

Helen:
"No: you would have her to be tenderly and delicately nurtured, like a hot-house plant—taught to cling to others for direction and support, and guarded, as much as possible, from the very knowledge of evil."

In short, Gilbert argued (or seemed to), that woman, when exposed to temptation, would certainly fall. On the contrary, temptation would only strengthen man; which meant that woman is weaker than man, when exposed to temptation. Again, Helen would prove in her diary that Gilbert was wrong, by determinately refusing Mr. Hargrave's love, and later on—ironically—Gilbert's too. And lo, how she endured her four years of living with the cruel 'monster' Huntingdon, and how calmly—albeit hurt and crushed—she endured her husband's betrayal. Do you still think woman is weaker than man, now, dear Gilbert?

Love and marriage is, of course, another central theme of this book. Through Helen, Anne emphasized that a happy marriage is neither about class, nor wealth; but a good balance of love, interest, and virtue. But most importantly, never let others' judgment influence you in deciding who or when to marry; not your dear parents, and certainly not your friends or neighbors. Always have freedom! is what Anne sounded throughout this book; freedom to choose your future husband, and also freedom to leave him if he tortures you in marriage. Let others say what they want; you must listen to your own heart, since it concerns only your future happiness—a very good and relatable advice for young girls these days, especially in some developing countries, where prejudices are still strong.


But they are not the only aspect that makes me love this book most. I can mostly relate to Helen Graham because we share many similar habits and principles; and here I will give you some examples using quotes from the book. Just like Helen, I prefer to live in quiet place, because 'I take no pleasure in watching people pass the windows; and I like to be quiet.' I also 'dislike an extensive acquaintance; but if I have a few friends, of course I am glad to see them occasionally.' While in a party or social event, I, too, 'was wearied to death with small talk--nothing wears me out like that. I cannot imagine how they can go on as they do.' I remember, as a child, at my dad's office gatherings, I always preferred to be with dad and his colleagues than with mom and the wives. Oh, I couldn't endure their small talks, even as a child!

This review has been long enough, and I might have stopped here; but I can't just let the misogynist Mr. Boarham and Mr. Hargrave go freely without my scold (yes, I'm talking to you, Sirs!) First of all, never mistakenly take a wife for a pet. Remember that God created woman as partner for man; partner, Sirs, not servant, least of all pet! Man and woman are different; each has unique strength and weakness, but man is never superior to woman; both are equal in their unique way! So, never think for a minute that a woman needs you to temperate, guide, or right her by marrying her! And learn too to notice a 'no' from a woman, either by words or gesture, when you were courting her. When she means it, stop pestering her just because you want to own her! She is not a horse, mind you!

There... with that, I think I have say all I want about this book. Need I say that this book has become my new favorite? Not only with interesting and well developed characters, I also loved how neatly Anne wove the story through the emotion and struggle of the characters; and with a satisfying ending too! Oh, and don't forget the strong Christian values which wrap the other aspects beautifully. And for all that...

5/5 for Tenant of Wildfell Hall—one book I am sure to visit again and again in the future!

Posted by Fanda Classiclit at 8:26 AM