RIP XIII: The Turn of the Screw by Henry James 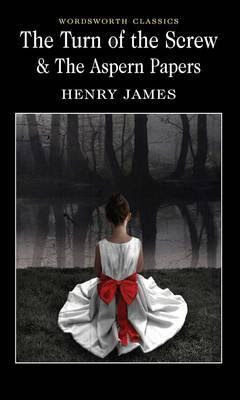 Someone has mentioned to me that The Turn of the Screw is 'interesting'. Normally a gothic-horror-ghost story is labeled as scary or dark, rarely interesting. But after finishing the book for R.I.P XIII challenge, I agree that this book is, indeed, interesting!

The Turn of the Screw is a novella (my copy contains 96 pages—excluding introduction and preface). And if you are familiar with Henry James' flowery writing style, believe me, other writers would have written it much shorter! However, the discussion that might follow the reading would be very long...

In short, the story is narrated by a man who was telling a story to his friends 'round the fire' on a Christmas Eve. It was a queer story he got from his friend, a young woman who was hired by a gentleman to be a governess. The gentleman is a bachelor who had been left guardian for his orphan niece and nephew in a country home called Bly in Essex. He specifically instructed the governess to never bother him for any trouble whatsoever. Arriving at Bly, our governess found a nice housekeeper, a sweet little girl called Flora, and a letter from the boy's school, announcing that Miles (the boy) was expelled from school; although Mrs. Grose the housekeeper said he is a sweet child who won't trouble anyone. Then series of queer things unrolled one after another that distressed the governess: supernatural apparitions of a man (not a gentleman) and a woman, who Mrs. Grose pointed as the late servant (Peter Quint) and governess (Miss Jessel). Then there were also the two sweet children, whom the governess knew have seen and communicated with the ghosts, but never told her anything.

Things got complicated when Mrs. Grose revealed that Peter Quint and Miss Jessel have made a scandalous love affair. Our heroine also realised that Mrs. Grose could not see the apparitions! The sweet children then started to behave cunningly, and our heroine suspected that it was the dead lovers who brought evil influence to them when they made contact with the poor children. Bad things turned to worse, and the story ended abruptly by a sudden death of someone in the house.

Many believe that the ghosts only existed in the governess' mind (because Mrs. Grose never saw it), and that the whole story was only the product of her hallucination. Is it so? Mrs. Grose did not see the apparition, and has never confirmed the governess' suspicion. One tangible proof is the letter from school. It could have proven that Miles had turned evil and done wicked things to his friends. However, Mrs. Grose could not read, so she could not confirm either.

The only subject she positively agreed with the governess is the bad character of Peter Quint and Miss Jessel. But what would it prove? So, all in all, I think James purposely created an intricate condition, of which we could not find single evidence that: a) there were ghosts, and b) the children turned evil from the ghosts’ evil influences. James just wanted this story to be ambiguous, and to make the readers debating forever, perhaps? He succeeded if that’s what he wanted.

Anyway, it is a nice gothic ghost story, and certainly very interesting. However, James' writing style sometimes washed away the spookiness of the story, and left only the interesting bit.

Posted by Fanda Classiclit at 12:49 PM
Email ThisBlogThis!Share to TwitterShare to FacebookShare to Pinterest
Labels: #RIP, 19th Century, England, Henry James, The Turn of the Screw