Dombey and Son by Charles Dickens 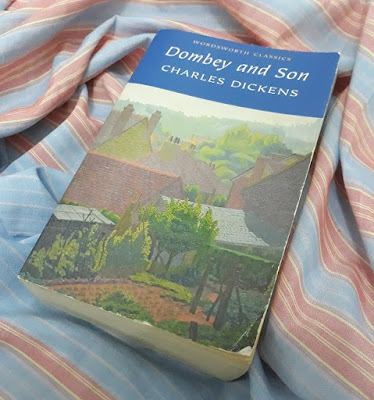 Mr. Dombey is a proud gentleman. And being proud in Victorian-England terms also meant calculating, stiff, unyielding; without passion, love, or affection. For Mr. Dombey, money and honour are his gods, and he lives solely to achieve them. Mr. Dombey has founded a counting house, and if this company should have had a vision-mission, it would have been: "Dombey and Son"—a company ruled by father and son. To that end, he has married a lady, not because he loved her, but to have a son, why, you'd need a wife! Mrs. Dombey was soon pregnant, and when the time came, she gave birth to.... a girl!

What? Mr. Dombey was dismayed; a girl is not what he has ordered! 'Just ignore her, and now make another baby; this time it's better be a boy!' is what Mr. Dombey has probably said to his wife. And as Mrs. Chicks (Mr. Dombey's sister) used to say, Mrs. Dombey 'made an effort', and with her last breath, she finally gave Mr. Dombey the son he has ordered.

Being a good businessman, Mr. Dombey took no time to plan, shape, and mould baby Dombey into the perfect-partner he has been envisioning; forgetting all along that his son is not a robot, but just a child who needs love and care. And as you can probably guess, his plan was eventually failed.

That was just the beginning; nevertheless from that short little summary you can see that pride would be the main theme of this book. And to emphasize that, Mr. Dombey is not the only example. There is another proud character, a lady, who was Mr. Dombey’s equal: Edith Dombey nee Granger. Can you imagine what would happen when two proud persons are tied in one institution: marriage? Disaster! And as usual, Dickens contrasted the proud couple with several humble characters: Florence Dombey—the unwanted daughter, and another main character in this story, as well some other secondary characters. Their faiths are intertwined in the numerous consequences of the major crime in this story: pride.

Unlike his usual style, in this book, Dickens mercilessly judged and punished the proud unloving father for neglecting and rejecting his daughter's love. He even 'slaughtered' the villain antagonist quite brutally (at least for Dickens' style). Sometimes it even felt almost Zola-ish. It’s not only the brutality, but the way Dickens described Mr. Dombey's psychological struggles with repetitive rhythmic sentences, is also very similar to Zola's. However, Dickens' unique comical characters, his witty satirical prose, and abundant of love—which were his trademark—help making the story more cheerful and warm; the quality which always makes his novels a perfect choice for holiday season’s reading.