The Bright Side of Life by Émile Zola 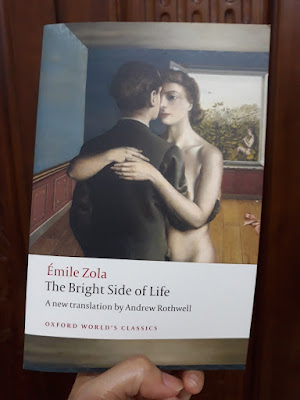 The twelfth novel of the Rougon-Macquart cycle turned out to be the most autobiographical of Zola's. He wrote The Bright Side of Life when he was 44 years old, and was in one of his much mental instability cases caused by the death of his two friends – one of them was his mentor: Gustave Flaubert – then followed by his mother's. From age 30, Zola too has been suffering from necrophobia (irrational fear of death) and obsessive-compulsive disorder. From these few facts, you know what's to expect from this novel. Despite of the original title: La Joie de Vivre, there's also a balanced dose of pain and sorrow. In fact, The Bright Side of Life is all about paradox: life force vs death, health vs pain, optimism vs pessimism. But Zola's true aim is that optimism must counterbalance pessimism, which was spreading in France when he wrote it.

Our heroine this time is Pauline Quenu, the daughter of Lisa Macquart and Quenu (from The Belly of Paris). She is, perhaps, the most mentally-stable member of the Rougon-Macquart clan. From the first, Pauline is a cheerful, hopeful, loving, and persevering young girl. Whatever her condition is, she always brightens her surroundings, spreading positive vibes around her. Pauline was orphaned after Lisa's and Quenu's death. She was adopted and lived with Chanteaus family on the seaside village called Bonneville. She tended her uncle Chanteau, who suffered from gout, with extra tenderness. And with Lazare, her cousin, Pauline often played outdoor near the seaside. Now Lazare was Pauline's opposite. He was gloomy and pessimistic, and gradually it became clear that he suffered from obsessive-compulsive disorder. He had an obsessive fear of death (necrophobia) – yeah, he is Zola’s embodiment in this novel – and he could never settle his mind on anything. Despite of their huge age difference and character difference, Pauline and Lazare were attracted to each other.

Pauline inherited a large sum of money from her parents, and from the first Madame Chanteau insisted that she would keep the money intact in the drawer at her desk until Pauline come of age to manage it herself. However, with Lazare's incapability to earn money, Madame Chanteau began to borrow Pauline's money for daily household, which the girl was always too pleased to lend. Then Lazare would come up with an idea which he believed will make the family rich, but had no money to fund it. Pauline would lend her money for capital, of which the Chanteaus made sure of returning after Lazare's success. He failed eventually, the money evaporated, and the pattern repeated over and over again! Madame Chanteau, out of her shame and indignation of "begging" from her niece, eventually just took the money without consulting Pauline. Moreover, she shut down her conscience by turning the blame to Pauline. She made herself believed that Pauline has brought bad influence to the family, and began to treat Pauline with hostility. On the face of all this, Pauline felt sad, but persevered and maintained her loving and cheerful manner. Pauline and Lazare were about to be married (Madame Lazare's genius idea of legally robbing Pauline's money), but one day in came a sophisticated town girl called Louise, whose femininity attracted Lazare. So now, it's not only her money, they robbed her of love too. She has sacrificed everything for the happiness of others, yet she was treated badly.

I have been wondering through the story, why Zola titled this book the joy of life, while it is filled with sorrow and pain – Pauline's heartbreaking is nothing compared to Louise's suffering in her greatly painful labor (Zola pictured it too vividly, that I felt my stomach ached only to imagine it!) So, where is the "joy"? I think this is the most philosophical novel from Zola which I have read so far. It takes us to reflect upon life and its meaning. Why must we continue living and persevering if at the end death is inevitable? Is life all sorrow and hopeless, then? Through Pauline, Zola wanted to raise France from its pessimistic slumber. Life might not be full of joy, but the joy of life is in life itself – being alive, having survived through perseverance in one's daily routines, sharing, loving and sacrificing for others' happiness, that is the joy of life! That is humanity. I loved how Zola symbolized Pauline’s emotional struggles with another “living character” of this book: the sea! When Pauline is happy, the sea is calm and beautiful, but when jealousy outburst (the only family-inherited “flaw” found in Pauline) violently shook her, the sea, too, became dark, raging, and turbulent.

In a way this novel is very Zola, but at the same time, it's very un-Zola – in term of the writing style. You won't see any of his usual exaggerated (or as I prefer to call it: intense) narrative. It was actually Zola's intention from the beginning to create a "simple" story. "This is the novel I want to write. Good, honest people placed in a drama that will develop the ideas of goodness and pain. Then, it will all be down to how it is written. Not my usual symphony. A simple, straightforward story. Environment still playing its necessary role, but less to the fore; description reduced to minimum. The style direct, correct, forceful, without romantic flourishes. The kind of classical language I dream of writing. In a word, honesty in everything, nothing dressed up." ~Zola's preliminary sketches of this novel. To be honest, I rather miss his “dressed up”, powerful, intense style – a quality I rarely found combined with beautiful prose in any other writers. Nonetheless, it’s one of the most honest books I’ve ever read; it’s OUR lives, OUR journeys, and OUR struggles.

Posted by Fanda Classiclit at 9:57 AM
Email ThisBlogThis!Share to TwitterShare to FacebookShare to Pinterest
Labels: 19th Century, Emile Zola, France, Naturalism, The Bright Side of Life, Zoladdiction 2019