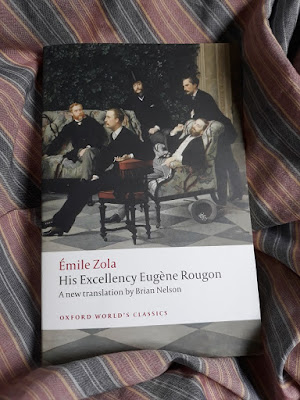 Reading a political novel right after election (in Indonesia, where I live) is really not a good choice! But it's Zola, and I thought if there's any writer who could make politics - the most boring subject for me - slightly interesting, it should be Zola (he wrote about miners poetically in Germinal, after all!) I'm not entirely wrong, this sixth book of Rougon-Macquart cycle provides some enjoyable intrigues; but the rest are dry and boring. It is by far my least favorite of Zola's.

Eugène Rougon is the eldest son of Pierre and Félicité Rougon, who, in The Fortune of the Rougons has used his influence as Minister of the Republic to provide his parents with information on crucial political situations before the coup d'état in 1851. The novel opens when Eugène has just handed his resignation as Minister of the Second Empire regime, after having a conflict with the Emperor. This situation worried his political cronies, as they had hoped that Rougon could do their personal favors, using his influence. One of them was Clorinde Balbi, an Italian woman with dubious background. Clorinde knew that Eugéne was obsessed with power to control others. She shared this obsession, but unlike Eugène, as a woman, she could only work in the background. She seduced Eugène with a hope of marriage, but Eugène rejected her. Insulted, Clorinde decided to take revenge. She took side with Eugène's successor Cound de Marcy. Meanwhile, his cronies started to do lobbying to raise Eugène's popularity, encouraged by Clorinde.

About this time, Eugène got an inside information about an assassination plan to the Emperor, but decided to do nothing. The plan failed, but it encouraged the Emperor to appoint Eugène to be Minister of Interior. Using his new power, Eugène rewarded his friends, and punished his enemies. But the ungrateful and greedy friends (of whom Eugène has made efforts to grant every favor) began to think he had done nothing for them, and even did harm to them. Clorinde did her best to ripen her schemes to throw Eugène down from the power, now that she has become one of the most powerful persons in the Empire, by becoming the Emperor's mistress.

This novel emphasizes how fragile and subtle the foundation of one's political entity is. To be on top, one depends absolutely on others' support and loyalty; and to buy these, one must obligingly do endless favors for them. There is no friend in politics, only supporter or enemy. Politicians are like wild animals, who, in any gathering must always keep an eye on each other; every gesture, every word, every eye contact can mean anything. People, who today support you to be on top, can dethrone you tomorrow. They can instill you with power, but can also rob you of it the minute you fail to satisfy them.


"These were the death throes of his power. Strong as he was, he was bound these idiots by all the work they had done together for their mutual benefit. As they withdrew, each of them robbed him of part of himself."

This is a novel about the hypocrisy and dynamics of political life, manipulation and cronyism during the Second Empire of France. Zola based many of his characters and events from historical facts. One of the most interesting is the baptism of the Prince Imperial. Zola captured the atmosphere perfectly as a journalist would when reporting a grand event live from the center of it. And indeed, wasn't he a journalist before he became a novelist?

While the topic might be uninteresting, Zola's style of allegorizing the protagonist's agony with the nature, as usual, spices up the story.

Here is Zola's portrayal of how the cronies have treated Rougon:

"They were all around him. They clambered on to his lap, they reached up to his chest, to his throat, till they were strangling him. They had taken possession of every part of him, using his feet to climb, his hands to steal, his jaws to tear and devour. They lived on his flesh, deriving all their pleasure and health from it, feasting on it without thought of the future. And now, having sucked him dry, and beginning to hear the very foundations cracking, they were scurrying away, like rats who know when a building is about to collapse, after they have gnaw great holes in the walls."

And here is how the weather fluctuates following Rougon's mental struggle following his last fall, and his subsequent resurrection.

"On the skyline, a storm was brewing. Below him was the Seine, an oily, dirty green coloured, flowing sluggishly between the embankments with their clouds of dust. In the garden, guts of hot wind shook the trees, whose branches then drooped again, their lifeless leaves hanging limp. He followed the path between the huge chestnuts. It was almost pitch dark. A damp heat was rising from a cellar."


[At home, moved by the calmness of his wife after receiving the news]

"The storm was refusing to break. Reddish clouds filled the horizon. Huge thunderclap resounded down the Champs-Élysées. The Avenue was deserted. The thunder was like a series of cannons going off."

"By now the storm had broken. It was incredibly violent. The downpour was accompanied by heavy thunder. [..] The Champs-Élysées were now a lake of mud, yellow, liquid mud, stretching from the Arc de Triomphe to the Place de la Concorde as if the bed of a river had suddenly been drained of water. [..] In the sky, the storm had left behind a trail of tattered, coppery clouds, a low hanging, dirty mass covering the remains of the day, a cut-throat, sinister gloom."

[Daydreaming about the future]

“In the miserable light of the copper-coloured sky, a procession was approaching through the slush of the roadway, on its way back from the Bois, the bright uniforms glinting in the darkness of the avenue. In the front and at the rear cantered a squad of dragoons. In the middle was a closed landau, drawn by four horses. At the doors were grooms in full gold-embroidered livery, impassive as the mud spattered them with each turn of the wheels. They were already caked in it, from their turndown boots to the tips of their helmets. And in the darkness of the closed landau Rougon could make out a child. It was the Prince Imperial looking out, his pink nose pressed to the plate-glass window, his ten little fingers spread out on the pane.”

From these train of scenes, I could feel some hope in Rougon’s mind – and in whole France – of the better future of their beloved nation. And I can’t help but admiring how Zola could portrayed the Prince Imperial scene so vividly – it’s as if he has taken a photo when the landau passed the street, and he explained to a blind man, every tiny detail of the picture!

Overall, like I said before, it’s not an enjoyable novel for me, but I can’t help acknowledging how relatable it is to every nation’s political lives – and that’s why politics often disgusts me!

Posted by Fanda Classiclit at 9:11 AM