Have you ever had any idea that Vincent Van Gogh – the famous Dutch post-impressionist painter – was a Zola’s fan? In his letters to his brother Theo, Van Gogh often quoted some excerpts from Zola’s books, and he was thoroughly influenced by Zola’s ideas. Van Gogh was born into a religious family; his father was a minister of the Dutch Reformed Church. Before plunging headlong into painting, Van Gogh was a fervent evangelist in one of coal-minings in Belgium. In fact, his two years stay with the coal miners left deep impression in the village, that Émile Zola later depicted his Abbé Ranvier character in Germinal from Van Gogh’s image, when Zola stayed there in doing researches for his masterpiece-to-be.

One of Van Gogh’s “Still Life” paintings (a work of art depicting mostly inanimate subject matter, typically commonplace objects which are either natural or man-made - wikipedia) is: Still Life with Bible, which he painted in 1885. 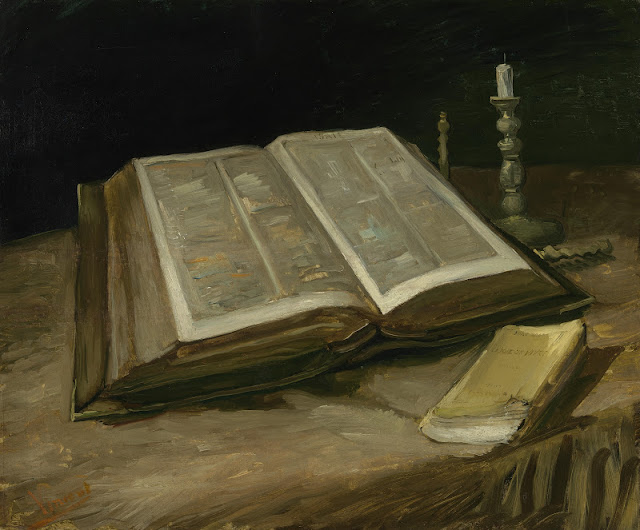 It is a gloomy painting of an open bible on the table against dark background, with a candlestick beside it. In front of the bible, with a faint yellow light, sit a battered copy of Zola’s La Joie de Vivre. The painting’s caption on Van Gogh museum’s website read: “This hefty Bible had belonged to Van Gogh's father, a Protestant minister. Van Gogh painted it just after his father's death. He placed his own copy of Émile Zola's La joie de vivre next to it. That book was a kind of 'bible' for modern life. The books symbolize the different worldviews of Van Gogh and his father.” While in his letter to his brother Theo – with whom he often had a lengthy discussions of his painting progress – Van Gogh described this painting as 'a still life of an open, hence an off-white Bible, bound in leather, against a black background with a yellow-brown foreground, with an additional note of lemon yellow.'

Normally I won’t be interesting in this painting – it’s too gloomy, and poor of color – but for Zola’s book in it. Now, I have just read The Bright Side of Life (English title for La Joie de Vivre published by Oxford World Classics), and while searching for some background texts, I accidentally stumbled upon an article about this interesting fact. And so, I began to scan the painting thoroughly, and tried to unfold its meaning.

What struck me immediately while scrutinizing it for the first time, is the lighting. You can see that the background is totally dark. Yet, there is the yellow light on the foreground; and from the way the shadow projecting from the book, the light could not come from the foreground. Then, where does it come from? There is a candlestick beside the bible; it even has a candle on it, but unlighted. I’m not a painter, and perhaps I’m not quite qualified to discuss paintings, but in my opinion, normally Van Gogh won’t have seen the objects in that way of lighting. So, was it intentionally, then – to emphasize an idea, perhaps?

Before trying to solve the “mystery of the lighting”, let’s discuss first about the bible and the book. We know that the bible belonged to Van Gogh’s father, the Protestant minister, who, I imagined, had planted Christian doctrines into his son’s head eversince Van Gogh's childhood. The bible is open, and we can see the blur prints on it – out of curiosity, I zoomed in the painting several times, trying to catch the title or a word or two to define to which part of the book it opened – I failed. Either my file is in low pixel (but I couldn’t find a better one), or it’s my eyes that are too weak! Anyway, I googled through, and finally found a text that says that the bible actually open to a certain passage from Isaiah 53:

“He is despised and rejected of men; a man of sorrows, and acquainted with grief: and we hid as it were our faces from him; he was despised, and we esteemed him not.
Surely he hath borne our griefs, and carried our sorrows: yet we did esteem him stricken, smitten of God, and afflicted.
But he was wounded for our transgressions, he was bruised for our iniquities: the chastisement of our peace was upon him; and with his stripes we are healed.” (King James edition)

Most coincidentally, I am a Lector at my local church, and for these months I have been reading this particular passage so many times I almost remember them, as I was preparing to read it on Holy Friday mass. So, technically, I have read Zola’s La Joie de Vivre along with Isaiah 53 – both pictured in this painting – during April, amazing, eh? That’s why I could relate very much to this subject.

Texts from Google which I have consulted were mostly convinced that Van Gogh saw La Joie de Vivre as a “new bible”, as Van Gogh was in a process to synthesize (if not replaced – as believed by a Cliff Edwards) religion with modernity. But, in that case, why is the bible opened, while the book shut? If he had wanted to replace religion with modernity, will it not make more sense to do the opposite? Some also argues about the different sizes of bible vs book – the book is way too small in comparison with the bible. But I don’t buy it; it’s mentioned in the museum website that the bible was “leather bound - hefty”, so it is only possible that it’s measured four times of the book (mass-market size?) Anyway, I’m more inclined to analyze the context, than the sizes of the object.

Isaiah 53 speaks about God’s man – a selfless man – who, though purely innocent, was chastised and must endure pain, solely for the salvation of others. Isn’t that directly correlated with La Joie de Vivre’s heroine, Pauline Quenu, who chose to endure the betrayal and robbery of the family only for their sake/happiness? Thus, in my opinion, the bible needed to be opened to show its precise passage, to be studied in parallel with the main theme of La Joie de Vivre. Do you think it’s possible?

Then how to explain the curious lighting angle (which many regard as symbolically shutting off his father’s rigid religion and shifting to a new-modern one)? In my opinion, still in conjunction with Isaiah 53, the dark background and unlighted candle reflected death (of God’s man or Christ, as well as his father’s perhaps), while the yellow light reflected the joy of life. Because, isn't it true that both Isaiah 53 and La Joie de Vivre speak of death and pain which in the end bring glory and joy? We could interprete the "wrong" angle of the lighting as symbolically alluding that the dark of death has been replaced with a simmering light of life. Does it mean modernity has become Van Gogh's "new religion", as he left his father’s religion? It is more likely that La Joie de Vivre has let Van Gogh adjusted his old view (influenced by his father and his almost puritan mother) on death and sorrow, to be brighter and more optimistic than before.

Zola's influence proved to be quite deep in Van Gogh, as besides this painting, Van Gogh also painted La Joie de Vivre in his "Still Life with Oleanders". The poor miner family in Germinal was also depicted in Van Gogh's "The Potato Eaters".

Posted by Fanda Classiclit at 2:06 PM

Email ThisBlogThis!Share to TwitterShare to FacebookShare to Pinterest
Labels: Emile Zola, The Bright Side of Life