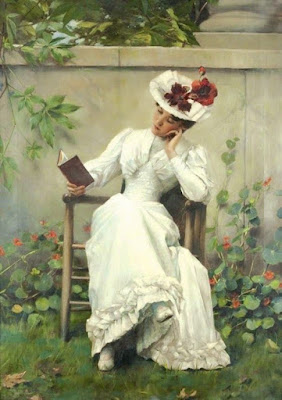 I may still be in a hangover from Zoladdiction - I just can’t take my brain off Zola! No, not reading more of his books – I think two books in a row is my limit – but I keep getting thirsty of Zola-ish things. The other day I spent my morning at work browsing Zola’s traces in modern France. Did you know that at least four cities in France have named their public squares or streets with Zola? One day I must go back there (I visited Paris in 2000, when I haven’t “found” Zola), and will certainly include Zola’s house in Médan (now it becomes Dreyfus Museum) on my itinerary!

But, back to earth… here’s some reading updates:

MAY
I am reading North and South - Elizabeth Gaskell right now for #elizabethgaskell2019 readalong on Instagram, hosted by Helena @reading.the.classics. From February to August we read different books, and Helena hosted an Instagram group discussion at the end of each month. I only participate for May’s, because North and South is the only Gaskell on my TBR. I love it so far, it’s a perfect read after Zoladdiction! And I would certainly read more of her – maybe Mary Barton next!

Next week I will finally delve into my #ccspin book: Cannery Row -John Steinbeck. Some say it’s hilarious and funny, let’s prove it! Actually these two were my most anticipated from my Classics Club list, so May would be a fun-filled month for me, reading-wise!

JUNE – JULY
I haven’t got any fixed plan yet, but, since I have only been tackling five books for Classics Club in 2019 by May, and as in August I will take a ‘journey to the sea’ (ehem…), I MUST slip 1-2 more books from list into these two months to catch up.

Also, I have Dante’s Purgatorio on my radar. Adam will be hosting a readalong (or something like it) by summer, but haven’t fixed on the date/month. Before that, I’m planning to read Vita Nuova, of which, the translator of my The Divine Comedy copy – John Ciardi – recommends to read before Purgatorio. And since I have read Purgatorio long ago – and have, alas, failed miserably! – I determined to do whatever it takes to succeed this second time. If Ciardi asks me to read Vita Nuova first, read it I will!

AUGUST
Brona has not posted it publicly, but yes… I am going to join her Moby Dick readalong in August! And knowing her, I suspect we’ll have a lot of fun during August. Very excited!

SEPTEMBER
Didn’t I say I’m still having a hangover from Zola? Actually I still have one unread book of the Rougon-Macquart: The Dream. I might read it after a train of readalongs. Then next year I’m going to start an ambitious project: reading all twenty novels in Rougon-Macquart cycle in chronological order – rereading all from the start!

And I might add another classic for Classics Club.

OCTOBER
It’s time to read some spooky books! So I picked two of my Classics Club list: Rebecca - Daphne du Maurier and We Have Always Lived in the Castle - Shirley Jackson. And if there’s enough time, I might be in for John Grisham’s Camino Island. It’s the first bookishly thriller from Mr. Grisham – about a lost manuscript of F. Scott Fitzgerald – and I think I’m about to love it!

NOVEMBER
This would be my last chance of completing my target of reading 12 books for Classics Club in 2019. Two last books from the list to close the year would be perfect.

DECEMBER
Time for some Christmas readings! I will read mostly from Christmas stories by Enid Blyton, Anthony Trollope, and, of course, Charles Dickens. Beyond that, I’ll read any book I’d fancy when the time comes!

And that will be my future reading life. What’s yours?

Posted by Fanda Classiclit at 2:56 PM