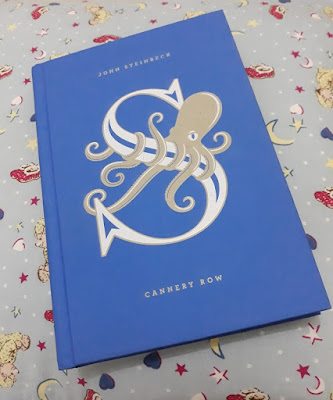 After East of Eden last year, I didn't think I'd get to another masterpiece from Steinbeck so soon. Yet Cannery Row has got me stunned! It was really a diamond; short but full of hidden meaning, straightforward yet poetic, quiet and warm.

What is Cannery Row anyway? Steinbeck wrapped it up beautifully in his opening line:

“Cannery Row in Monterey in California is a poem, a stink, a grating noise, s quality of light, a tone, a habit, a nostalgia, a dream. Cannery Row is the gathered and scattered, tin and iron and rust and splintered wood, and chipped pavement and weedy lots and junk heaps, sardines canneries of corrugated iron, honky tonks, restaurants and whore houses, and little crowded groceries, and laboratories and flophouse. Its inhabitants are, as the man once said, "whores, pimps, gamblers, and sons of bitches," by which he meant Everybody. Had the man looked through another peephole he might have said, "Saints and angels and martyrs and holy men," and he would have meant the same thing. “

So Cannery Row is about a few blocks of fish canneries in the harbour city of Monterey, California, drawn from Steinbeck's memories when he stayed there. This is a tale about its remarkable inhabitants. Who are they? Mostly, a bunch of good-for-nothings. There's Mack and the boys, a gang of unemployed losers, whose only ambition was contentment without working. They occupy an empty building owned by a Chinese grocery store owner - whose 'wealth' mainly consists in the piles of tit bits in his shop, and in the debts of his customers - called Lee Chong. Mack and the boys named their 'house' the Palace Flophouse. Then there were Dora Flood who runs a bar and whorehouse called The Bear Flag. All these people were expelled from their families, works, and even society.

Then we meet our main protagonist: Doc, a marine biologist, whose character was borrowed from Steinbeck's real friend Ed Ricketts. Doc is a loner, collecting sea creatures from the coast to be sold to universities, museums, or laboratories. He preserves them in his laboratory. Doc is the smartest and the most kindhearted man in Cannery Row. People love him because, in contrast with the world's cold acceptance towards these people, Doc willingly bears with them, listens to them, treats them with dignity, never criticizes, but instead, imparts small wisdom to them. In short Doc accepts them as they are, for which, these people indebted to him, and always feel that they 'must do something for Doc'.

Mac and the boys got an idea, they’d throw a surprise party for Doc. But as Doc was coming home very late that day, they got drunk and eventually crashed his property while waiting for him. So instead of making him happy, they broke all his belongings, and made him miserable. I was literally crying when they were breaking Doc's treasured phonographs! I imagined Doc, after a day of serious working, the classical music is all he has to cheer him up, something to warm his lonely life, the way family does a man. And this only luxury he can afford was crashed by the guests! That punches Doc gave Mack are well deserved.

Actually Cannery Row does not have much of a plot. It evolves around the Flophouse boys' efforts to give a nice present to Doc. After the first failure, they intended to do a better one. And along with it, Steinbeck unrolled the lives and struggles of each character, and some seemingly unrelated ones.

The most interesting of the later is Frankie, the 'unseen' boy - nobody seems to realize his quiet existence, and he is literally 'useless' - in Doc's phrase: "There wasn't a thing in the world he could do". When he single mindedly 'decided' to get a beautiful antique clock for Doc's birthday - by stealing it - and got caught, and when Doc asked him why he did it, Frankie looked a long time at him, and his earnest answer was: "I love you" which really broke my heart! Oh that boy... what would become of him when he's grown up? He might be good for nothing, but he is capable of loving... and abundantly too! And the only thing he needs in return is to be loved! Oh, if only we are not too much into ourselves, we will be able to realize of this gem of humanity!

Another sweet and sad story is of Mary Talbot, a loony - or I prefer to call her a 'dreamer'. She likes to throw parties, but instead, as her husband doesn't earn much, she encourages others to give parties, of which she can manage. Sometimes she even gives parties to cats, yes, cats! And she takes the business seriously. Let me show you one of the scenes:

“Kitty Randolph was sunning herself by the front fence. Mary said, “Miss Randolph – I’m having a few friends in to tea if you would care to come.” Kitty Randolph rolled over languorously on her back and stretched in the warm sun. “Don’t be later than four o’clock,” said Mary. “My husband and I are going to the Bloomer League Centennial Reception at the Hotel.”

I really thought at first that Mary was talking to another woman, but then at “Kitty Randolph rolled over languorously on her back and stretched in the warm sun” I realized it was cats she has talked to - LOL!  Some of the many funny bits you'd find in Cannery Row. Isn’t it sweet? And her husband is so sweet to go into her scenes.

On the whole, there's a quality of vagueness, dreamy, unreal in the existence of Cannery Row, but in fact it might be the truest of humanity. The most curious bit of it is the old Chinese man who is often seen flip-flapping on the street in the evening “just at dusk between sunset and the lighting of the street light” - Steinbeck called it the ‘small grey period’. I feel that it represents something which is floating over human existence, something which never changes, always there, a continuity. It’s on the other side of the society – it seems desolate, lonely, poor. But in fact, it is the truest, the fullest, the richest of humanity – it is where love and affection rules, instead of money and fame. It is where everyone is treated equally as a dignified human being. It is Cannery Row.

What a treasure! What a beautiful book! The most beautiful of the three I’ve read so far: this, Of Mice and Men, and East of Eden. Now I can’t wait to delve into the sequel: Sweet Thursday – is it going to be as sweet as Cannery Row? We’ll see!