All the Pretty Horses by Cormac McCarthy 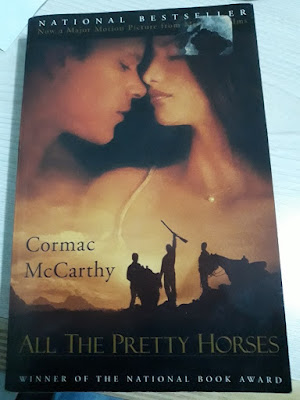 This was my first Cormac McCarthy. Years ago I have meant to try The Road, but after reading about his poor-punctuation style, I cancelled it. All the Pretty Horses is the first of his Border Trilogy, and since I'm always interested in similar theme, I thought this would be my entrance - and who knows, I might enjoy it!

I was wrong. The theme is great, but it's far from what I've expected. The story is dark, and at times it's even quite bloody, despite of "all the pretty horses".

John Grady Cole is a 17 y.o. boy grew up in a ranch. The ranch has become his life, so when his mother decided to sell it after all the family died, Grady decided to leave the ranch altogether. Together with his friend, Lacey Rawlins, he travelled to Mexico to become a cowboy - a romantic dream of boys their age.

Before crossing Mexican border, they met a skinny and shaggy young boy called Jimmy Blevins, who insisted that he was 16 y.o., and that the (too fine) horse he is riding is really his. Out of compassion, the two boys (Grady in particular; Rawlins distrusted Blevins from the first) let the skinny boy rode with them along the way. Blevins' horse run away one night after a terrible thunderstorm, bringing with it Blevins' vintage pistol (again, they doubted it really belongs to the boy). Blevins convinced Grady and Rawlins to steal the horse back after they found it in a nearby village. It turned into a chaos; Blevins was caught, and the boys ran away.

Eventually they found a big ranch, and were hired as workers. Impressed with Grady's great skill with horses, the owner brought him to stay near the big house. Grady fell in love with the boss' daughter Alejandra. At around this time a group of rangers came to the ranch, caught Grady and Rawlins, and put them into jail, where they had hard times, and almost got killed.

Enough with the summary, now let me bring out my scale to weigh the whole story:

Positive things:
* the cowboy things, both during the journey, but especially at the ranch (the horse trainings are fabulous!)
* bildungsroman - it's marvelous to witness how their journey matured Grady and Rawlins. When you are close with the nature, you'll think a lot about life, God, and all spiritual and philosophical stuffs.

Negative things:
* lack of punctuation - how annoying it is to follow a long dialog without proper punctuation; you'll get lost of who's talking right now, and it lacks the emotion too.
* polysyndetic syntax - okay, I confess I have had no idea that Hemingway's style has a name! Yep, it feels like reading Hemingway, you know... with a lot of "and" serves as the only conjunction on a passage. I guess it's half the reason I'd stopped reading Hemingway! So polysyndetic is something about "conveying a flow and continuity of experience in a passage" using certain conjunctions.

So, what's the final verdict? I guess 3 / 5 is the max. Another writer to be deleted from my list.

Posted by Fanda Classiclit at 7:46 AM