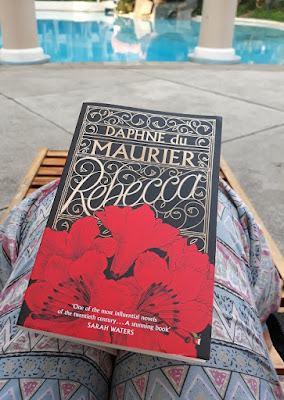 Rebecca is often considered Daphne du Maurier's masterpiece. It's a perfect Halloween read - beautiful yet haunting. I have read it for R.I.P. XIV, and loved it. As most likely you all have read it, I’m not going to take the pain of summarizing it (and it’s difficult to do so without throwing spoilers – if you haven’t read it – anyway), so, here are my thoughts:

It begins with the end

If you hate spoilers, you might dislike this kind of writing style, in which the characters told you what have happened in the past that they ended up in their situation today. For me, it provides sort of certainty of how the story might end, which I prefer, rather than always worrying whether this will end tragically or happily. By knowing how it would end (except for mysteries, of course), I can read slowly and calmly, savoring every moment of it. In the end I found it much more satisfying. And so it was with this book. The heroine told us that she and her husband have survived from a tragedy - something which has happened to their lovely mansion: Manderley, and which they both desperately tried to forget.

It's about a woman without name, and a name without the woman

I was rather annoyed, in the early chapters, as it seemed nobody ever mentioned the name of the narrator! But in the end I think du Maurier did it purposely to highlight the contrast between her and Rebecca - whom everyone talked about, found everywhere, heard everywhere, though she was dead years ago.

Yvonne (let's give the narrator a name, at least in this post, as I hate a nameless character!) is timid, introverted and insecure young woman, working as companion to a wealthy woman. Rebecca is her opposite in everything! She married the owner of an estate, rich, bold, beautiful, sociable, powerful. Those were the outside qualities any outsider would have perceived. But as a husband, Maximilian de Winter knows better. Inside, the two women are also the David and the Goliath in their hearts and souls. Rebecca is also wicked, selfish, cruel, and without love. She reminds me of Cathy in East of Eden.

Yvonne is sweet, loving, innocent, kind, and tender, if only you know how to love her, because she is, again, insecure. I can totally relate to her, because I understand how to manage insecure people. My dear mom is one. What they need, on top of everything, is love - they need to be sure that they are loved. When you love them, and protect their privacy (because that's what we, introverts, need most of all!), we'd see a brave woman underneath the fragile appearance. Unfortunately the world still love outside appearances better than inner qualities. And that's why introverts and insecure people tend to be disliked and misunderstood, just because they aren't sociable. They forget that these people, if you are willing to understand and respect their silence and timidity, you'll see that their capability to love is much bigger than the extroverts.

In this story, only Maxim and Frank, the agent, it seems, who could really see Yvonne's qualities, and understand her. From the very beginning I have had certainty that Maxim married Yvonne purely for love. That he, alone, could see underneath the plain appearance of this girl - while others would never, or with difficulty, understand.

What struck me is, that the so called 'dim-witted' Ben could see the cruelness beneath Rebecca's superficial charm, while others who were more intelligent, failed. Apparently, being intelligent does not always prevent one from being shallow and vain. On the other hand, I think innocent people use their feeling more than their mind, in judging others' character. That's why Rebecca's charms never deceived poor Ben.

And I loved how du Maurier put Maxim's faith in Ben's hand. But, isn't murder still a murder, be it done to good people or villains? Well, sometimes, evil can only be stopped by violence. It's still wrong, of course, but I'd probably do the same if I have had a soulless person like Rebecca - or Cathy - as a spouse.

The wicked housekeeper
No, I'm not going to analyze Mrs. Danvers' character here. She's purely as wicked (and more sick, perhaps) as her mistress. It's only that every time I read about her, it was Downton Abbey's Mrs. Hughes face that popped up in my head. I know that Mrs. Hughes is kind and wise, so different from Mrs. Danvers, but do you remember her face when she looked at Mr. Green (the valet how 'attacked' Anna Bates)? It's full of cold hatred and disgust; and it's that face which I imagined was on Mrs. Danvers' every time she saw Yvonne. Yeah, a Gothic castle which is haunted by it's evil mistress, and kept by a wicked housekeeper... there's enough of Gothic element there to make it a favorite Halloween read!
It has been a delicious read for me, and I think I would love to return to it in the future!