CC Spin #21: Tarzan of the Apes by Edgar Rice Burroughs 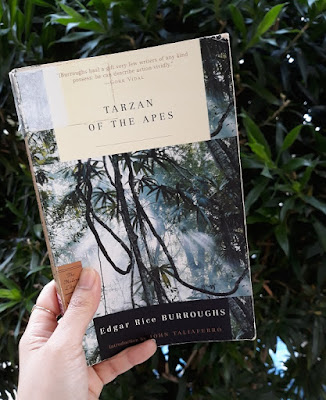 Previous Classics Club Spin has introduced me to an interesting book – One Flew over the Cuckoo’s Nest - which I have dreaded, but glad (more relieved, actually) that I have read it at last. This time the spin brought me another surprise - a book I regarded as a romantic adventure of an ape man (I remember watching Tarzan on TV when I was a kid), but rather different than last year's, this book appeared to be more serious than just a teenage lit. Here is why…

Regular readers of my blog must have been familiar with my 'obsession' with Émile Zola, and the heredity and evolution theme in his monumental works: the Rougon-Macquart cycle. Thus you can imagine how excited I was when realizing that Tarzan of the Apes is more than an entertaining adventure/love story, it is also an interesting (more interesting even, perhaps, than Zola's) analysis on the theory of heredity and evolution. A gentleman by birth, but an ape by education, Tarzan is. It is thoroughly exciting to see how he begins to realize by instinct his superiority compared to his peers, how he learns cunning tricks, how he starts making calculations and strategies, and of course, how he teaches himself to read and write, by help of books in the cabin - John Clayton's library.

Tarzan taught himself to read and write from a shelf-full of books, which John Clayton has, thankfully, brought with him, when he and Lady Alice decided to sail to his new post in British West Africa. I can imagine, how little Tarzan spent hours in the little cabin, diligently memorizing words and syllables from picture books, until he could fluently structure sentences, though he have never heard the pronunciation. The first proof of his study was the note he stuck on the door of the cabin which was found by the group of Professor and Jane Porter, signed by "Tarzan".

Frankly speaking, this signature was where I have detected the first flaw in Burroughs' heretofore genius scientific facts in the story. Immediately I thought: if Tarzan was the name Kala and the other apes called him in their 'tongues', and he has never heard before English words pronounced, then how could he write his name as T.a.r.z.a.n ? You know what I mean? But, if it is a flaw, it is of no significance, compared to how much Burroughs has influenced and impressed us with a touching, humorous, and adventurous stories.

"Being a man, he [Tarzan] sometimes killed for pleasure, a thing which no other animal does; for it has remained for man alone among all other creatures to kill senselessly and wantonly for the mere pleasure of inflicting suffering and death." How much truth there is in this sentence! How often do we boast of human's superiority from animal, that we might forget that we, human, often behave even worse than animal - above quote is the proof.

People are often picking animal for an insult or verbal abuse, or even for bullying others. So, next time someone does that to me or my friends, I'll remind him/her using above argument. Man could be worse than animal, when he chose to do so. Tarzan, as a man-beast, highlighted the good sides and bad sides of human beings. The conflict in Tarzan, between wanting to self-develop himself and being disgusted at moral corruption of his kind, is what eventually shape him to a noble character. So, real nobility is not what man is born into, but what man decides to be, when he has choices to be other than that.

John Clayton, the Lord Greystoke, and his wife Lady Alice, were the embodiment of the true nobility, and Tarzan, while being educated as and to be an ape, he also inherited this nobility from his parents. On the other hand, though he inherited human's cunning way of views from his biological parents, yet he grown up in the nature, and so, by combining these two aspects in him, he evolved to be an almost perfect human being.

Tarzan is one reminder, thus, to the world, that man should have intimate relationship with the Nature to better himself. I believe that spending much time in the nature enables us to reflect on the simplicity of God's creation, and to remind us of what we were created to be, in the first place.

This book has been an easy and entertaining read, but at the same time, an unexpected one.