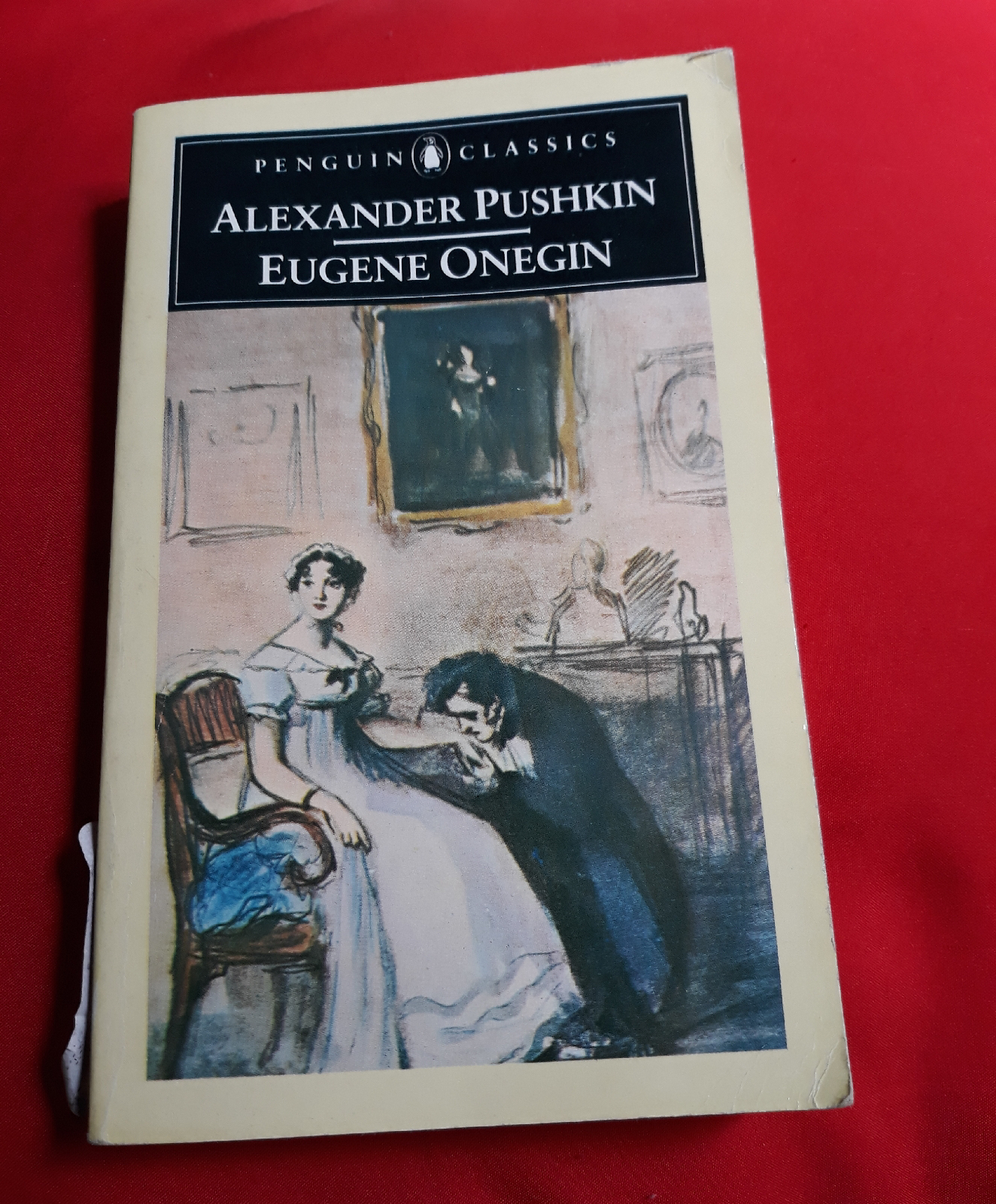 Novel in verse has never been my favorite. I prefer the flowing narration in prose which is more soothing to the mind. Reading, anyway, is (for me) more of therapy than challenge. Therefore, I have started Eugene Onegin with much trepidation - I wasn't sure I'm gonna like it, but I'm curious all the same. #CCSpin25 helped me to finally plunged into it. The result? Still didn't enjoy the novel, but I admired the beautiful rhymes Pushkin had woven to narrate a simple yet deep and meaningful tale.

When I said Eugene Onegin is a simple story, I really meant it. The plot is very simple, and there are only four main characters: Eugene Onegin, Tatyana Larina, Vladimir Lensky, and the Narrator - which is the embodiment of Pushkin himself. The simple plot allowed Pushkin to explore the personality if each character. From the opening scene (the dying bed of Onegin's uncle), for example, we know instantly what kind of man Eugene Onegin is:

But God, how deadly dull to sample
sick room attendance night and day
and never stir a foot away!
And the sly baseness, fit to throttle,
of entertaining the half-dead:
one smoothest the pillow down in bed,
and glumly serves the medicine bottle,
and sighs, and asks oneself all through:
"When will the devil come for you?"

I don't think I've ever hated a character as early as in the first page, as I did Onegin! Cold hearted, egotistical, selfish - a young man without any compassion at all! And to think that he inherited his uncle's property in the country after that, enraged me more.

So, the cold hearted Onegin started his "career" as St. Petersburg's dandy; flirting, dancing, partying, until he gets bored. After moving to the country, he gets to know a young romantic but naive poet: Vladimir Lensky. It was Lensky who first brought Onegin to the Larins' - Olga Larina is Lensky's fiancee. Olga's sister, Tatyana - an introverted young girl who loves to read - fell in love with Onegin. She wrote a letter expressing her passionate love to him, but, not only coldly rejected her because he thought marriage is boring, Onegin even scold her for daring to express her feeling to a man.

"You'll love again, but you must teach
your heart some self-restraint; for each
and every man won't understand it
as I have... learn from my belief
that inexperience leads to grief."

Lensky took an initiative to persuade Onegin to attend Tatyana's name ceremony at the Larins, where he lived that it's just a family event. Angry with Lensky after knowing the truth that it's a rural social event, and that the guests rumored about him and Tatyana, Onegin avenged Lensky by dancing and flirting with Olga. The wounded Lensky challenged Onegin to duel. Out of convention, and despite finding the truth that it's all just a misunderstanding, Onegin and Lensky fought the duel nevertheless. There are more proofs of Onegin's egotistical which you'd find throughout the story, and which will ruin many people's lives (and himself at the end).

As I said, it's a simple story with clear message, but told beautifully by Pushkin. I admired how he highlighted each individual's personality through the stanzas, which limited dialogues.

In the end, novel in verse is still not my cup of tea, but I'm glad to have finally read it. It was so beautiful, but at the same time it was quite a struggle for me. I understood, perhaps, only 80% of the verses, and, but for the simple plot, would have abandoned it halfway through!

Posted by Fanda Classiclit at 6:25 AM