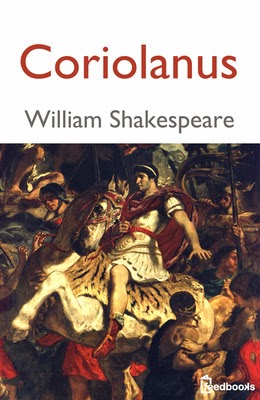 After delving into plays for a year last year, I thought another Shakespeare would have been enough for me this year. However, this particular play has interested me since my last year plays event: Coriolanus, so when The Classics Club announced January to be Shakespeare theme of our Twelve Month of Classics Literature, I instantly decided to give it a try. Historical-tragedy has been my most successful theme of Shakespeare, and although Julius Caesar and Antony and Cleopatra are much more famous, Coriolanus turns out to be another gem from the Bard!

The play depicted a Roman general named Caius Marcius, who lived in around 5th century BC. While he was fighting against the Volscians in Corioli, the plebeian were lamenting about grain price which was at that time controlled by the senate. They put the blame on Marcius, and hated him for that. Things were getting worse because Marcius faced the plebeian in an openly contemptuous manner.

While he was not good in social life, Marcius was highly successful in his military campaigns. He won the Volscian battle very bravely, where Cominius—his commander—gave him the name of Coriolanus: the conqueror of Corioli. With the win, he also won Senate’s respect and appreciation, and they supported him to run for consul. However the tribunes: Sicinius and Brutus provoked the citizens to oppose it. Being under-pressured, Coriolanus was enraged and insulted the people. He was banished from Rome, and finally decided to join his enemy, Tullus Aufidius of the Volscians, to retaliate against his own country.

Coriolanus is a typical portrait of the patrician-plebeian conflict, which is still relevant in any country in any era. I read in Sparknotes analysis, that Shakespeare may have gotten the inspiration for the plot from the actual conflict between King James and the Parliament in England’s early 17th century, the time when Shakespeare wrote this play.

Coriolanus was perhaps a great military commander, but he was far from a good state leader (consul); he even had contempt for plebeian or the common people. So I think this is not a pure tragedy, because it was Coriolanus himself who made the circumstances against him. His fall was caused by his pride and ambition; he failed to gain people’s respect, and he was blinded by his ambition for revenge that he could not detect Aufidius’ betrayal.

The play is very engaging; the plot is flowing nicely, the stage arrangement is very good and helps us to learn the actual situations. The war is very lively, but most of all, the speeches are very strong! Although a secondary character, Volumnia—Coriolanus’ mother—is an influential figure in Coriolanus’ decisions. Her speeches are so noble, touching and inspiring. Even Coriolanus was very moved by his mother’s speech, that he changed his mind about destroying Rome. His anger was replaced by tears under her mother’s words.

This time Shakespeare is succeeded in controlling my emotion to the play’s climax, and I finally found a new favorite play. Five stars for Coriolanus!

I read e-book from Feedbooks.com

Posted by Fanda Classiclit at 1:26 PM