The Brothers Karamazov by Fyodor Dostoyevsky 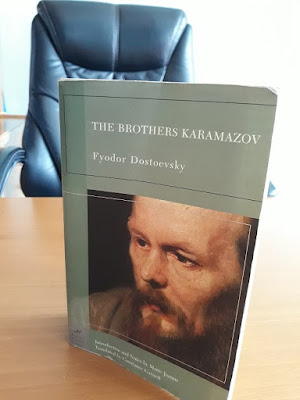 If God does not exist, then everything is permitted—this seemed to be the central point of argument Fyodor Dostoyevsky brought up in The Brothers Karamazov. Originally intended to be a trilogy, he wrote this amazing book to follow the life of a notorious family, the Karamazovs; from the father: Fyodor Pavlovich, to the three (legitimate) sons: Dmitri, Ivan, Alyosha, and (most probably) illegitimate son: Smerdyakov. They are entangled into an intricate love-suspicion-jealousy-hatred relationship throughout the story, which lead to destruction both to (most of) themselves and to people around them.

So, how did Dostoyevsky put the above argument into this nicely-woven story? From the beginning the doubt and rejection of God and immortality scattered throughout the chapters. But the most serious one is in these two famous chapters: “Rebellion” and “The Grand Inquisitor”. In “Rebellion” Ivan poured out his disappointment of God for letting injustice and suffering happened to innocent people, apparently, for nothing. While “The Grand Inquisitor” is a poem Ivan wrote to question about free will God had imposed upon man. He believed that free will is impossible burden for mankind, because we will always have to answer to our consciences; that we will never be happy whichever path of life we choose, good or evil. If that was the case, then why wasting your energy by doing good? Is that true? Dostoyevsky let us readers judge the case by following the faith of the Karamazov brothers.

Of the three (plus one—the illegitimate) sons, Alyosha was the only one who chose “good” from the beginning. However, he too had doubt—albeit small—when his beloved Father Zosima’s corpse decomposed shortly after his death, while everyone was almost sure a miracle would happen to the saintly monk. But Alyosha soon got through his doubt. Dmitri, on the other hand, started as a scoundrel and sensualist; have plunge to the lowest, but finally managed to crawl up to the light. In the crucial moment, “something inside” ripped him from the fatal act—that is conscience.

But the most interesting case is Ivan. His “conversation” with the Devils shows how strenuous the battle of his conscience was; how bad his soul has been contaminated by evil power. Ivan was not atheist; he just did not accept God’s “interference” in human life; hence his belief of if God does not exist, then everything is permitted. That way, so he believed, man could do whatever he likes without weighing his conscience, and that would make him happy. This ideology eventually provoked a murder, and Ivan did suffer from his conscience. I’m glad though that in the end his good conscience won the battle at the end.

Moral value of this book is, that man must try first to understand God’s plan for humankind; and this must not be done with mind only, but much more with reflective soul. To logical mind, conscience did make one suffer; either when he tries to be good or, even more, when he does evil. And to be good is arduous, especially when one is born from a bad family like Karamazovs. What then? Dostoyevsky answered this by writing quite lengthy passages of Father Zosima’s speeches in the early chapters—which, I confess, seemed not to be related to the story when I read it, but made sense in the end. These passages contain some aspects that were missing from Ivan’s ideology: humility, and “all responsible for one another”—the later applied not only in evil, but also in love or good deeds. Young Zosima’s turning point moment was marked by his humility to his servant whom he has beaten the night before his planned duel. The same worked for Alyosha. Remember how Alyosha, when he was disappointed at Father Zosima’s humiliation, went to Grushenka’s, and what has made him turning toward “light” again then? Is it not after Grushenka pitied him; that Alyosha was astonished that she had pity on him—he who was nobody? Is it not a remark of humility too? Lastly, the remark of all responsible for one another appeared in Ilusha and the children story. Ilusha’s sorrow was caused by Dmitri is an example of how one evil deed to one person might cause suffer to a lot of people. The same also applies to love and good deeds.

So, Ivan’s ideology might partly be right; that free will could cause suffering. But on the other hand, it is also true that from freewill too love, charity, affection, and in the end happiness, was born.

5/5 stars for this great book; I would like to reread it someday!

Posted by Fanda Classiclit at 9:48 AM