On “Timshel” [East of Eden] | The Freedom of Choice 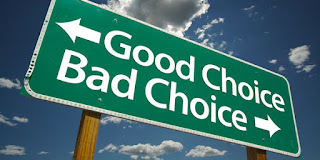 I have been a bookworm since before I could even read. My mother used to read for me from illustrated children stories. So, my earliest knowledge about good and evil came from tales such as Hansel and Gretel or Cinderella, where the villains were always totally evil and the main protagonists purely innocence. That formula then shaped my perspective about the world through my childhood.

When I was about 10 or 11 years old and already been bored with my children books, my father—from whom I inherited the love of books—suggested that I tried Agatha Christie for a change. I picked After the Funeral from school library, and was instantly falling in love with Christie's. I don't remember the exact title, but one of the books has really shattered my conviction about good and evil. The pattern repeated while I ploughed through nearly all Christie’s book. Christie's murderers were mostly ordinary, good, respectable persons who, when being under certain pressure, decide to commit murder. From Christie I learned that a murderer does not have different qualification from normal persons—which until then I was certain I never possess. This suggested that every human being has the possibility to commit murder. It only needs a decision. It really made me shuddered when I came to this conclusion. I imagined that with only a weapon (and it could be just a pair of scissors or a penknife) I could have killed someone if I decided to. I, too, could have been a murderer. And like all teenagers, there was really a phase when I hated many things in the world; which only added to my fear of myself! Like Christie said, murder is simple. And that thought has literally ended my childhood innocence.

Fast forward; like everybody else, I read Harry Potter series. On the last chapter of Harry Potter and the Deathly Hallows, Harry's youngest son Albus Severus has been worried that he might be sorted to Slytherin on his first departure to Hogwarts; to which Harry calmed him: "Albus Severus Potter, you were named after two headmasters of Hogwarts. One of them was a Slytherin and he was the bravest man I've ever known. […] If it really means that much to you, you can choose Gryffindor. The Sorting Hat takes your choice into account." It implies that being good or evil is our own choice; the decision is in our hand; others will only “take our choice into account”. Really, if I have not, at that time, been impressed by J.K. Rowling's power of storytelling, that passage only would have made me love Harry Potter. Of course, ever since the Agatha Christie period, I have learned much about freewill and "God created everything good" doctrines; but that passage has strengthened my believe, that to be good or evil is our own choices—the freewill God has imposed upon us, which no one—not even Himself—can take from us.

For quite a long time afterwards, I held on to that conviction. Then I got to know one 19th century French writer who then became my most favorite author: Émile Zola. As much as I admire and respect his works on the heredity and environment effect on shaping human psychology, I can’t help thinking that Zola’s characters seem always to be imprisoned by this handicap (heredity illness). And while I always love his beautiful prose and mind-blowing stories—and I do admire his genius study on this subject—I also keep asking myself: “But what about freewill?” Maybe that’s why Zola has never been as much respected as his piers—because he praised the nature of man more than his divine quality. 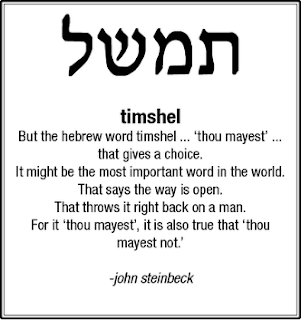 Fast forward again… Many classic pieces that I have devoured these years talked about conscience and freewill (William Golding’s Lord of the Flies is one of them), but they did not struck me as heavy as John Steinbeck’s magnum opus that I have just read: East of Eden. It’s as if John Steinbeck, through this magnificent book—and its prominent keyword: timshel—is re-convincing me about the goodness of man. That no matter how bad, how evil, how monstrous were our ancestors, and how thick their blood is inside our veins, it is what we choose that in the end matters, because God has imposed us with the most precious gift: the freedom of choice.

Posted by Fanda Classiclit at 2:03 PM

Email ThisBlogThis!Share to TwitterShare to FacebookShare to Pinterest
Labels: East of Eden