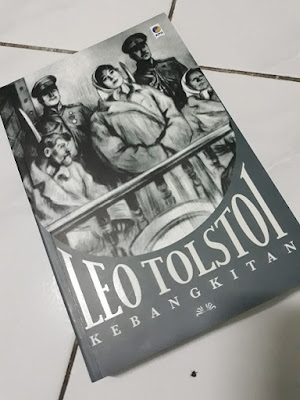 After the real tough War and Peace years ago, I have sought opportunity to read (and love) more of Leo Tolstoy’s. However, I ended despising Resurrection, Tolstoy final work.

The protagonist is a nobleman, Prince Nekhlyudov. He has wronged a peasant girl, Maslova (Katushya), and got her pregnant. Ten years later Nekhlyudov is selected to be a juror in a murder case. To his surprise, the accused is Maslova, the girl he has wronged long ago. The sweet-innocent girl has fallen into prostitution; and it’s all because of him. When Maslova is sentenced to prison in Siberia, Nekhlyudov is determined to redeem his sin by following her, and even marrying her. In the process, Nekhlyudov becomes familiar with prison lives, and he witnesses many injustices commit by powerful people whom he befriended in his life pre-Maslova case. So, the process of helping Maslova also changes Nekhlyudov’s, mentally and morally.

The main critic of this book is the injustice and hypocrisy of man-made laws. Many of the prisoners in the state prison where Nekhlyudov often visits are innocent and mistreated. The authorized legal persons and the riches do not care about the prisoners. Nekhlyudov keeps wondering, how those people can be so blind to not seeing the blunder, and why this injustice keeps happening. And more importantly, what must be done to stop it.

From the theme only, this book looked promising to me, as I am always interested in social injustice topic. However, it seems to me that Tolstoy was drowned too deep into the topic, and sacrificed the style. I found it cold, boring, and almost like reading a preacher. Maybe the translation has an effect too—I read an Indonesian translation—but I also read in Wikipedia that “…Tolstoy was writing in a style that favored meaning over aesthetic quality.”

The story itself is hard to believe and artificial. From the beginning of his involvement with Maslova’s cause, Nekhlyudov has been searching for the bottom of the whole problem. He understood more than before, but was still puzzled. In the last chapter, someone has given him a pocket Bible, which he absent-mindedly put into his pocket. Later when he was in his room, and was racking his brain for THE answer, he accidentally found the pocket bible in his pocket. Then he remembered of the sayings that the Bible has the answer to every question… something like that. And so he opened it casually, and just read the chapter printed there, which was, coincidentally, Matthew 18 (and Tolstoy really put all the verses into the book.) And after Nekhlyudov read them all…. Bam! His mind opened, and suddenly he knew all the answers!

So sorry, comrade! This is just not my cup of tea. 2,5 / 5 is the final verdict. And for the time being, no more Tolstoy for me, thank you.