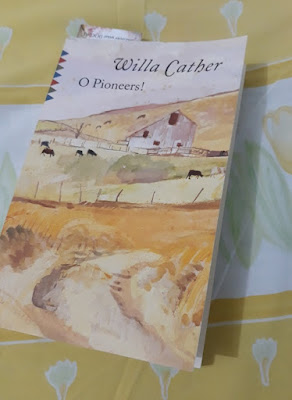 When you feel like reading but your present mind is like a spinning wheel, trust Willa Cather! And so did I. O Pioneers! was my second Cather after Death Comes for the Archbishop. 'O Pioneers! (1913) was Willa Cather's first great novel..' is printed on the back of my copy, the Vintage edition. And indeed, it was great for a first work!

O Pioneers! is the first of Great Plains trilogy, succeeded by The Song of the Lark and My Antonia. Depicting the first immigrants who settled as farmers in the Nebraska country, the story focused on the Bergsons, a Swedish-American family who owned and farmed their land. Before the father died, he trusted the land management to Alexandra, his only daughter who was much more able compared to her two brothers, Lou and Oscars, while their youngest brother Emil was still a little boy. The Linstrum's land was next to Bergson's farm, and for years Alexandra and Carl - the Linstrum boy - were friends. After two years of tereible drought and crop failure, many of their neighbors left the land to seek better opportunities in other counties, including the Linstrums. But Alexandra, despite of Lou and Oscar's objections, kept staying. Bold, strong-willed, and intelligent, she loved and trusted their farmland, and by her intuition and eagerness to learn modern techniques, she succeeded in making it prosper, while their neighbors failed.

Sixteen years later, the Bergsons were the richest landowner there. Carl Linstrum visited for the first time after he tried (and failed) to prosper in Chicago. Lou and Oscar suspected him of wanting to marry Alexandra. They trudged the idea if receiving an outsider into the farm, while it was they who had worked hard for years. Carl, who has realized after those years that he truly loved Alexandra, had no choice but left, this time to Alaska. But not before he witnessed a growing flirtatious relationship between Emil (now a handsome young man) and a married Bohemian woman, Marie Shabata, who, with his husband, has brought Linstrums' land after they left.

If you seek a slow-paced, soothing book, O Pioneers! is perfect for you. But for one tragedy near the end, this book is generally calm. It gives us chance to witness the characters dynamically developed. At the beginning, Alexandra was my favorite. But I was disappointed after she blamed Emil and Marie, while pitied Frank over the tragedy. I realized that adultery is never right, but you can't stop people of falling in love with anyone. And really, it's Frank's fault too that his wife must find another love. She fell in love head over heels with him in the first place, but he just wanted her to suffer during their marriage. Marie is flirtatious in nature, but never unfaithful. And on top of everything, murder is the ultimate crime. I can probably (though difficultly) forgive adultery, but never murder - passionately or coldly. I personally will never forgive a man who deliberately seized a gun when he was just suspicious. No, Frank has always been a murderer-to-be from the beginning. He just sought for a justification to take revenge on Marie. (-_-)

Posted by Fanda Classiclit at 3:05 PM