One Hundred Years of Solitude by Gabriel García Márquez 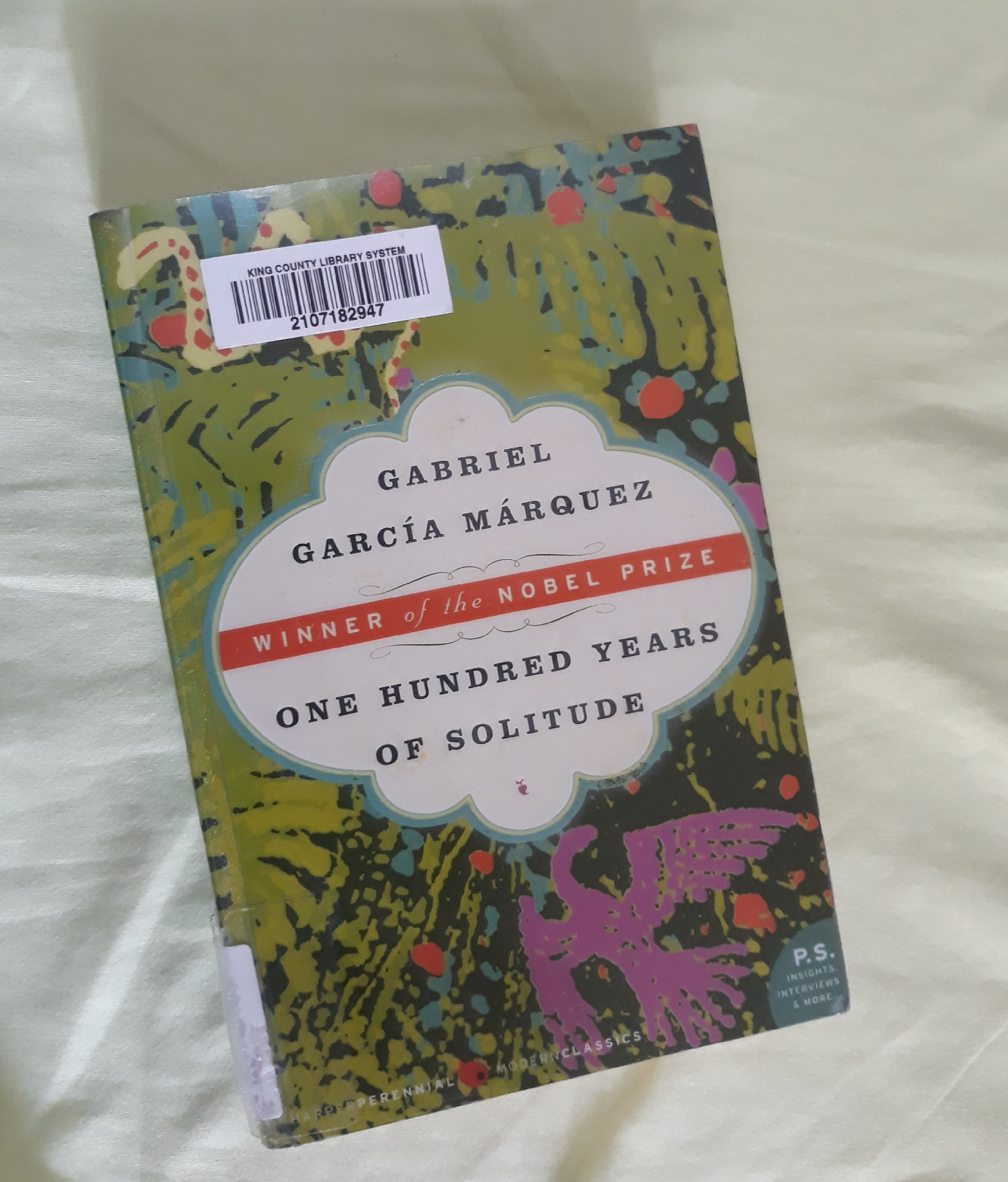 To begin with, magical realism is one genre I can hardly relate. Years ago I've read Love in the Time of Cholera, and didn't like it. I blamed my dislike of romance to be one of the causes at that time; the other is the bad translation. But afterwards, Toni Morrison got my attention, and I ended up liking Beloved - which is also of the same genre. I have avoided One Hundred Years of Solitude for a long time because I doubted I would like to read the combination of Márquez AND magical realism. But then Ruth hosted the readalong, and I thought I'd brave myself to finally read One Hundred Years and get over with. And I did. I mean, I did read it through - though not without struggle. And I finally got over it. Meaning, that I officially declare here that Magical Realism AND Gabriel García Márquez will never again be in my reading list. Never.Again.

One Hundred Years is telling the lives of Buendía family over the century. Beginning with the first generation: José Arcadio Buendía and Úrsula Iguarán, his cousin who became his wife. José founded Macondo, an isolated town in Colombia. For years he tried, but failed, to connect it with the outside world - except for the gypsies who often come to the town, led by the mysterious Melqúiades, and bring latest inventions from the outside world.

The first chapters was very engaging. I even took notes (summary) of every chapter, beginning chapter 1, but finally stopped after chapter 4. There were too many events, that they soon became rather insignificant. My real struggle began in chapter 7 or 8. I felt weary, and my head was full of strange incident after strange incident, that I have lost any emotion which hitherto still linked me with the characters. I just felt nothing, and the only reason I still continued reading, was my curiosity. Like, OK, where will these rotten people end up? Will they get better next generation? (They don't!) And reading the last chapters coincidentally with the beginning of Covid-19 outbreak, made it even harder.

From all the flawed members of Buendía dynasty, I think the one I could relate most was Colonel Aureliano Buendía, but before he became obsessed with the war. I liked his solitary existence, working hard at the laboratory, and I loved especially when he crafted his tiny golden fish. I think he's the most sensible - again, before the war-mania - of all (excepting Úrsula). With Úrsula, I felt mostly admiration. Admiration of her consistent efforts to protect and improve the family, which in the end proved useless.

One more thing that made me persevere with this book, is its similarity with Zola's Rougon-Macquart. The same hereditary corruption in a family, which, in Rougon-Macquart came from the matron, while in Buendía began with the patriarch. The same determinism, from which generations of the families could not overcome. The big difference, is that Zola instilled some hope in most of his characters.

Again, I usually don't have trouble with magical realism - why, I still read fantasy sometimes, and love Harry Potter; and I have certainly enjoyed a lot of realism books. But this magnum opus of Gabo's; it's just overwhelming. For instance, I'm still fine with the imprinted ashes on Aureliano Buendía's sons forehead, which later on marked them to be murdered. There's got to be some symbol there which I didn't even want to analyze (LOL). And when José Arcadio's blood flowing through the road and half of the town, well... it's weird but still acceptable for magical realism. But I couldn't hide my disgust any longer when Remedios the Beauty ascended to the.. sky?

So, in short, it has been a struggle for me to read this book - a winner of the Nobel Prize. I only have a vague idea that it's all about oppression and more or less political. But to me, the Buendía is just a bunch of rotten and flawed people with no hope.

I was so relieved when I have finished it, and I guess 3/5 is a very genereous rating for a book I haven't enjoyed too much!

Posted by Fanda Classiclit at 10:55 AM
Email ThisBlogThis!Share to TwitterShare to FacebookShare to Pinterest
Labels: Gabriel García Márquez, Magical Realism, One Hundred Years of Solitude